The results are in: pod 15 saw Stevie Nicks going all Iron Man on Ozzy and the rest of the competitors, really inflicting a beatdown that we didn’t see coming. Where are all the Ozzy fans, dude? In any case, Stevie moves on to the Sweet 16.

Now we arrive at pod 16, our final preliminary round. Yes folks, we’d do anything for corporate rock, but we won’t do that. Because, you know, it freakin’ hurts. 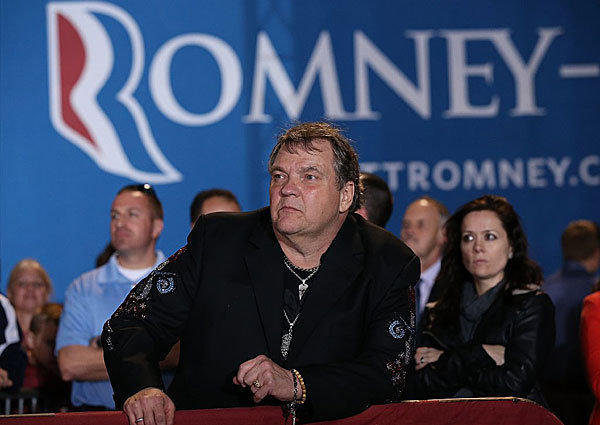 After a tenure in the off-Broadway production Rainbow (In New York), Meat Loaf earned a slot in More Than You Deserve, a musical written by classically trained pianist Jim Steinman. An appearance in the cult film The Rocky Horror Picture Show followed, and in 1976 Meat Loaf also handled vocal duties on one side of Nugent’s LP Free-for-All. Soon, Meat Loaf reteamed with Steinman for a tour with the National Lampoon road show, after which Steinman began composing a musical update of the Peter Pan story titled Never Land. Ultimately, much of what Steinman composed for Never Land became absorbed into 1977’s Bat Out of Hell, the album that made Meat Loaf a star. Produced by Todd Rundgren, the record was pure melodrama, a teen rock opera that spawned three Top 40 singles — “Two Out of Three Ain’t Bad,” “Paradise by the Dashboard Light,” and “You Took the Words Right Out of My Mouth” — on its way to becoming one of the best-selling albums of the decade.

Alex: I respect a man who will tell me what he will and will not do for love. But Meat Loaf never said what “that” was, and I can’t live with that sort of uncertainty.

Jim: He wasn’t terrible in Rocky Horror. Sadly, in everything else, he was…

Me: Meat Loaf gets credit for Rocky Horror. But that’s cancelled out by his appearance with Mitt Romney. So that leaves us with Fight Club versus…everything else he ever did?

Bonesparkle: “I’d Do Anything for Love” would make more sense if it were being sung to Meat Loaf instead of by him. If a woman sang that song, I think we’d understand that by “I Won’t Do That,” she means take her clothes off while he’s in the same county.

Many point to Billy Squier as early-’80s rock personified — an era when he and many of his peers tempered hard rock with pop melodicism — and by adding just the right amount of posing and posturing for the newly constructed MTV set, he scored a string of arena rock anthems and power ballads. … Squier’s hit parade continued with 1982’s Emotions in Motion, another big release that spawned an additional monster radio/MTV hit with “Everybody Wants You,” as Squier supported the album with a tour of U.S. arenas (with an up-and-coming Def Leppard opening). But on his next release, the 1984 Jim Steinman-produced Signs of Life, Squier hit a snag in his career. Although the album was another sizeable U.S. hit, the video for the album’s single, “Rock Me Tonite,” alienated some of Squier’s hardcore rock following, as the singer was filmed flamboyantly prancing around his apartment in time to the music (and in a moment of great delight, ripping off his shirt) — resulting in the clip often being considered one of the most inadvertently hilarious videos of all time.

Jim: Attempted to make The Stroke the word, but succeeded only in sounding as if he spent too much time applying The Stroke to himself…

Me: I loved Billy Squier. Still do – tracking his greatest hits as I type. It’s true that I mistyped “type” as “trype” just then and had to fix it, but that’s not the point here. The point is that Billy did some seriously great tunes, corporate or not.

Me: I’ve seen the video. Now, can we talk about something else?

Bonesparkle: I don’t know. I think we should watch it again.

Me: That isn’t necessary.

Bonesparkle: I think it is.

Me: Do NOT play that video!

Bonesparkle: You mean this one?

Me: You suck, you know that?

With five number one singles, fourteen Top 40 hits, and four number one albums, the Eagles were among the most successful recording artists of the 1970s. At the end of the 20th century, two of those albums — Their Greatest Hits (1971-1975) and Hotel California — ranked among the ten best-selling albums ever, and the popularity of 2007’s Long Road Out of Eden proved the Eagles’ staying power in the new millenium. Though most of its members came from outside California, the group was closely identified with a country- and folk-tinged sound that initially found favor in Los Angeles during the late ’60s, as championed by such bands as the Flying Burrito Brothers and Poco (both of which contributed members to the Eagles). But the band also drew upon traditional rock & roll styles and, in their later work, helped define the broadly popular rock sound that became known as classic rock. As a result, the Eagles achieved a perennial appeal among generations of music fans who continued to buy their records many years after they had split up, which helped inspire the Eagles’ reunion in the mid-’90s.

fikshun: For most bands, if their principal members are no longer enchanted with their sound they’re making, they break up the band and start over.  The Eagles, on the other hand, replaced one member with another until they got their corporate formula just right. (Out of curiosity, I wonder if Don Henley is into eugenics.) It was a heck of a formula though. How many other bands got heavy airplay on the hard rock FM stations at the same time they were getting heavy airplay on the AM country stations? One point in their favor: like KISS, they’ve been on their farewell tour for what seems like 15 years now. Like KISS, they booted out a lead guitarist. Unlike KISS, they didn’t send out another clown wearing a mask with his likeness, trying to pretend nothing had changed.

Jim: Once a great band, then became everything they thought they were slyly making fun of…and didn’t realize it. To quote their best composer, “Don’t look back/You can never look back….” Had they heeded….

Me: It’s hard to imagine that adding Joe Walsh to any band would make things worse, isn’t it?

After Korn played the Jacksonville area in 1995, bassist Fieldy got several tattoos from Durst (a tattoo artist) and the two became friends. The next time Korn were in the area, they picked up Limp Bizkit’s demo tape and were so impressed that they passed it on to their producer, Ross Robinson. Thanks mostly to word-of-mouth publicity, the band was chosen to tour with House of Pain and the Deftones. The label contracts came pouring in, and after signing with Flip/Interscope, Limp Bizkit released their debut album, Three Dollar Bill Y’All. By mid-1998, Limp Bizkit had become one of the more hyped bands in the burgeoning rap-metal scene, helped as well by more touring action — this time with Faith No More and later, Primus — as well as an appearance on MTV’s Spring Break ’98 fashion show. The biggest break, however, was a spot on that summer’s Family Values Tour, which greatly raised the group’s profile.

Jim: First, learn to spell. Second, spelling will not change the fact that you suck. One is reminded of the words of Dr. Samuel Johnson: “It is better…” Oh, nevermind. The words of that philosopher Ron White fit better: “You can’t fix stupid …”

Alex: I know LB did it all for the nookie, but I shudder to think that they got any.

While best known as the longtime frontman for Chicago, singer Peter Cetera also enjoyed success as a solo performer. Born September 13, 1944 in the Windy City, Cetera was in a band called the Exceptions when in late 1967 he was recruited by another aspiring group, then called Chicago Transit Authority, to play bass. By the early ’70s, Chicago was among the most popular acts in America, their brand of muscular jazz-rock spawning such major hits as “Does Anybody Really Know What Time It Is?” and “Saturday in the Park,” many of them featuring Cetera on vocals. In 1976 he penned the gossamer ballad “If You Leave Me Now,” and when it hit number one, most of Chicago’s subsequent work followed in the same soft rock style. Although the band’s fortunes dwindled over the remainder of the decade, in 1982 Chicago returned to the top of the charts with “Hard to Say I’m Sorry”; several more smashes, including “Hard Habit to Break” and “You’re the Inspiration,” were to follow. Although Cetera recorded his eponymously titled solo debut in 1981, he remained with Chicago full-time until 1985. Upon quitting the band, he soon returned to the top of the charts with “The Glory of Love,” the first single from his album Solitude/Solitaire as well as the theme to the film The Karate Kid, Part II; that same year he scored another number one smash, “The Next Time I Fall,” a duet with Amy Grant.

fikshun: The first Chicago record, back when they were going by the monicker Chicago Transit Authority, was really hot. But as with the Doobie Brothers and Jefferson Airplane, an evil changeling stepped in and it all went to crap. When the hydra descends to terrorize the city, the three heads of Peter Cetera, Mickey Thomas and Michael McDonald will be a formidable beast indeed.

Bonesparkle: Sam, you hateful son of a bitch. Didn’t we already deal with this in the Chicago pod?

Me: I felt that Cetera’s solo career deserved to considered on its own merits.

Bonesparkle: Fuck you. You call Meat Loaf vs. a second helping of Cetera vs. Kid Bizkit vs. Linda Ronstadt’s goddamned backing band vs. the Prince of Prance a choice? That’s like having a choice between getting your balls shot off or hacked off with a machete.