Telling History vs. Making Art: "a tension between Art and Science" 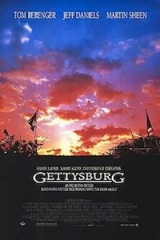 Part one in a series

As a battlefield guide at Fredericksburg & Spotsylvania National Military Park (FSNMP), I frequently speak with folks who’ve come to the battlefields because they’ve read The Killer Angels, which in turn inspired them to come see a Civil War battlefield. Michael Shaara’s novel is about the battle of Gettysburg and has nothing to do with any of the battlefields at FSNMP (Fredericksburg, Chancellorsville, Wilderness, and Spotsylvania), but I am typically grateful that the novel—or perhaps its film version, Gettysburg—has stimulated someone’s interest enough to bring them through the front door.

Gods and Generals by Shaara’s son, Jeff, features Fredericksburg and Chancellorsville prominently. It also chronicles the death of Confederate General “Stonewall” Jackson. Visitors will come to the Jackson Shrine, the building where Jackson died, and say, “Hey, this isn’t what it looked like in the movie,” or “This isn’t the way I pictured it from the book,” and sometimes feel disappointed that sublime reality doesn’t live up to Hollywood slick.

For that reason, some colleagues roll their eyes at the mention of “Gods and Jacksons”—the book or the film. They grumble the word “novelist” as an epitaph, and they dismiss the cinematic splendor of, say, Gone with the Wind, because it’s too drenched in magnolias and moonlight—Oscars be damned. Likewise, The Killer Angels’ Pulitzer Prize has often carried little weight with them. “I am a historian,” wrote D. Scott Hartwig, widely acknowledged as the National Park Service’s authority on the battle of Gettysburg. “Consequently, I originally looked down upon Shaara’s work. After all, it was fiction.”

Even artists like Shelby Foote and Ken Burns—whose major Civil War works are ostensibly creative nonfiction—draw scorn for their research methods or their historical interpretation.

Others, like two-time Pulitzer-winner David McCullough, disagree: “No harm’s done to history by making it something someone would want to read.”

On one hand, art excites the public imagination; on the other, it can implant misconceptions or factual inaccuracies even as it tries to articulate larger truths. In fact, it may be within that balance between fact and truth—and the expectations that historians, artists, and readers/viewers have toward them—that the tension originates. That the public often bases its expectations on collective memories complicates matters further because such memories are often romanticized constructs at odds with what historians know to be true. The artist, meanwhile, must be guided by the conventions of his/her craft, such as pacing, narrative arc, etc.

“The telling of history is a tension between Art and Science,” says Burns:

The Science of History would enumerate the myriad details equally, without discrimination; the telephone book at its worst. The Art of History has produced Gone with the Wind, and worse, The Birth of a Nation, and…mini-series dramas which try to convince us that it was not brother against brother, but heaving bosom against heaving bosom.

Good history has always struck a balance between these two polarities, never allowing formal considerations to overwhelm and capsize the truth of events, nor allowing dry recitation of fact to render its meaning unintelligible or worse—boring.

Burns warns against “a kind of castor oil of dry dates and facts and events of little meaning, something we knew was good for us, but hardly good tasting.”

“Whatever else it is, history ought to be a good yarn,” said journalist-turned-historian Bruce Catton, whose narratives on the Civil War have reached vast audiences since the war’s Centennial. Catton’s critics have retorted that what he should have said was, Whatever else it is, history ought to be accurate. “Catton’s knack for knowing a good story when he saw one did not always extend to recognizing a story too good to be true,” one has said. I’ve heard Shelby Foote criticized for the same thing.