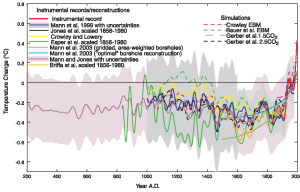 On October 22, climate scientist Michael Mann sued for defamation the Competitive Enterprise Institute (CEI), The National Review (TNR), and two writers associated with the two organizations. The lawsuit is regarding accusations made by Rand Simberg of the CEI and Mark Steyn of NRO that Mann had committed academic and scientific fraud and for comparing Mann to convicted child molester Jerry Sandusky. Mann announced the lawsuit on his Facebook page. Mann and his attorney, John B Williams of the law firm Cozen O’Connor, originally demanded that the CEI and TNR retract their original articles under threat of a lawsuit, but both organizations refused to do apologize for or retract the articles.

The first article, written by Rand Simberg of the CEI, originally claimed that

Mann could be said to be the Jerry Sandusky of climate science, except that instead of molesting children, he has molested and tortured data in the service of politicized science that could have dire economic consequences for the nation and planet.

To the CEI’s credit, the editors removed this sentence and another they identified as “inappropriate” shortly after the article was published. But other of Simberg’s claims were identified by Mann’s attorney, John B Willams as defamatory, specifically claims that Mann engaged in “data manipulation” and “academic and scientific misconduct” that was supposedly exposed by the illegally published “Climategate” emails.

Simberg and the CEI refused to retract the article, writing in their response that they “reject the claim that [Mann’s research] was closely examined, let alone exonerated, by any of the proceedings listed” in the retraction demand. Myron Ebell, in another part of the statement linked above, continued his criticism of the Penn State investigation even though the National Science Foundation (NSF) independently conducted a second investigation that interviewed Mann’s critics and yet reached the same conclusions as the Penn State investigation.

Simberg’s original article has more than just inappropriate comparisons and possibly defamatory rhetoric. It also has a number of errors in fact, including one regarding a quote taken from S&R’s own reporting. First, Simberg incorrectly claims that Penn State “didn’t bother to interview anyone except Mann himself.” The Penn State investigation was broken down into two phases, an inquiry and an investigation. It’s true that inquiry phase did not interview of Mann’s critics, but it did interview Gerald North, lead author of the 2006 National Research Council report that cleared Mann of any misconduct regarding his hockey stick papers, and Donald Kennedy, former editor of the journal Science. The investigation phase interviewed other subject matter experts but also included one of Mann’s critics, specifically Richard Lindzen of MIT – one of the people that Simberg himself contacted for comment on his article.

Second, Simberg quotes from an S&R report on the NSF investigation, NSF confirms results of Penn State investigation, exonerates Michael Mann of research misconduct. But Simberg mistakenly refers to the National Science Foundation Office of the Inspector General (OIG) as the National Academy of Science (NAS), a significant error. Furthermore, Simberg quote S&R’s report and neglects to mention that the very next paragraph contradicts his own point. Specifically, Simberg claims that “the NAS (sic) investigation relied on the integrity of the university to provide them with all relevant material, and was thus not truly independent (emphasis added).” The following section of the S&R report illustrates Simberg’s error – Simberg’s quote and emphasis is in italics/bold, the rest of the quote is original from the article linked above:

The OIG also independently reviewed Mann’s emails and PSU’s inquiry into whether or not Mann deleted emails as requested by Phil Jones in the “Climategate” emails (aka Allegation 2). The OIG concluded after reviewing the the published CRU emails and the additional information provided by PSU that “nothing in [the emails] evidenced research misconduct within the definition of the NSF Research Misconduct Regulation.” Furthermore, the OIG accepted the conclusions of the PSU inquiry regarding whether Mann deleted emails and agreed with PSU’s conclusion that Mann had not.

The OIG did conclude that PSU didn’t meet the NSF’s standard for investigating the charge of data falsification because PSU “didn’t interview any of the experts critical of [Mann’s] research to determine if they had any information that might support the allegation.” As a result, the OIG conducted their own independent investigation, reviewing both PSU’s documentation, publicly available documents written about Mann and his co-researchers, and “interviewed the subject, critics, and disciplinary experts” in reaching their conclusions. (emphasis in second paragraph added)

Finally, Simberg implied that Penn State was more interested in the grant money that Mann had brought into the university than it was in investigating Mann, going so far as to claim that “Michael Mann, like Joe Paterno, was a rock star in the context of Penn State University.” S&R reviewed this allegation in detail in 2010, finding that Mann was responsible for only $4.2 million in grants between 2006 and 2009. Over the same period, Penn State made over $2.8 billion in research grants, and the Penn State football program made $160 million in profits on revenues of $280 million. Compared to the aggregate research grants or the direct profits brought in by Paterno, Mann’s research grants are small potatoes.

While Penn State was apparently willing to trash its good reputation for the public face of the university – the Nittany Lions football team – it would not have any reason to risk embarrassment over a few million dollars brought in by a controversial scientist. Risking the academic reputation of the university would threaten that $2.8 billion in research grants, and no-one would risk that for any single researcher, even one with Mann’s reputation. Quite the opposite – Mann’s reputation could be a drag on research grants, so if anything, Penn State was biased against Mann during the course of the inquiry and investigation.

The second article was written by Mark Steyn of TNR. It referenced the CEI post (complete with the “molested data” sentence that the CEI removed as “inappropriate”) and described Mann’s work as “fraudulent.” As with the CEI, TNR refused to retract the blog post or apologize for comparing Mann to Jerry Sandusky.

Steyn’s own article, short as it was, made some of the same mistakes that Simberg’s did. As an example, Steyn wrote that the Penn State investigation was “a joke,” yet the NSF disagreed. However, Steyn also made a mistake that Simberg did not – Steyn claimed that former Penn State president Grahm Spanier investigated Mann, yet the documentary evidence demonstrates that Spanier was not involved in the Mann investigation – the inquiry committee was composed of William Easterling (Dean of the College of Earth and Mineral Sciences), Alan Scaroni (Ass. Dean for Graduate Education and Research in the College of Earth and Mineral Sciences), Candice Yekel (Director of the Office for Research Protections), William Brune (Head of the Department of Meteorology), Eva J. Pell (then Senior Vice President for Research), and Henry C. Foley (Vice President for Research and Dean of the Graduate School). The investigation committee was composed of Sarah M. Assmann (Professor in the Dept. of Biology), Welford Castleman (Evan Pugh Professor and Eberly Distinguished Chair in Science in the Depts. of Chemistry and Physics), Mary Jane Irwin (Evan Pugh Professor in the Dept. of Computer Science and Electrical Engineering), Nina G. Jablonski (Department Head of the Dept. of Anthropology), Fred W. Vondracek (Professor in the Dept of Human Development and Family Studies), and the aforementioned Candice Yekel as the Research Integrity Officer. None of these individuals has been compromised by the Sandusky scandal.

As the lawsuit announcement points out, Mann has been repeatedly cleared of charges of academic misconduct by multiple different organizations ranging from the National Science Foundation in 2011 to the Pennsylvania State University in 2010 to the National Research Council back in 2006. And while the multiple “Climategate” investigations may not have mentioned Mann directly, none of them found any evidence of scientific misconduct on behalf of any of the scientists whose private emails were illegally published, including Mann’s.

Simberg wrote in the comments to his article that he felt Mann would not sue because “the last thing that Mann wants to do is go under oath with a discovery process.” Rich Lowry, editor of TNR, wrote that a lawsuit would result in Mann going “to great trouble and expense to embark on a losing cause that will expose more of his methods and maneuverings to the world.” The discovery process is when lawyers go through the opposition’s emails and documents to discover what is and is not true, and both Simberg and Lowry clearly believe that Mann has more to lose in that process than either of them do.

Mann’s work and private correspondence has been investigated repeatedly and thoroughly over the last decade. As a result, Mann has little to lose in this kind of lawsuit – unless he truly is guilty of the very misconduct of which his critics accuse him. On the other hand, the National Review and especially the Competitive Enterprise Institute stand to lose much more in the discovery process – donor lists could be exposed, private communications among the climate disruption denial community could be published, and so on.

That Mann chose to move forward with his lawsuit even knowing that his emails and documents would become public should give the CEI, TNR, and their various ideological allies pause. For even if Mann fails to win his defamation claim, this lawsuit could result in the kind of exposure for climate disruption denying organizations and individuals that the tobacco litigation did for Philip Morris, the Tobacco Institute, et al.

NOTE: S&R has obtained a copy of the legal complaint and will publish its analysis of the document following a review. We’ll also continue to bring you updates and analysis of this story as it develops.