Our oldest daughter went to Kenyon College in Ohio, and we’ve always loved the place. Its campus is one of the most beautiful spots on the face of the earth, especially early on a summer morning with the morning mist burning off, which is what it was like the first time we visited. We’ve always had warm feelings about the place, and about the importance of the kind of liberal arts education it offers. So, apparently, does Kenyon alum Josh Radnor, whose movie, “Liberal Arts,” is a love letter to Kenyon, to this education, and, more broadly, to the arts themselves. Especially books. This is a movie about books, of all things, about the transformative power of literature, a love letter to books. How on earth did this move even get made?

I have to plead a bit of ignorance about Radnor, who apparently is a star because of a tv show I have never seen, but which has an awfully good title: “How I Met Your Mother.” But he’s clearly a triple threat—he has written a highly literate and clever screenplay that had me chuckling, indeed laughing out loud, throughout. He’s a more than competent director, shepherding a cast that includes himself, Elizabeth Olsen (who is very good indeed), Richard Jenkins, Alison Janney (also a Kenyon grad), and Zac Efron, as well as a number of others. And he’s an attractive star—since this is the only thing I’ve seen him in, I can’t comment too broadly, but he does a very good job as Jesse Fisher, who is facing a series of midlife crises at 35 when he receives an invitation from an old and favorite professor to come see the latter off at his retirement. 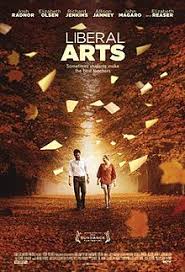 Complications ensue, of course, some predictable, some not, but all handled well. The most important of these surround his growing relationship with Zibby (Olsen), which, unsurprisingly, becomes complicated, since she’s 19 and he’s, um, not. It’s a film about coming of age, no matter what age you are, and what conflicts can emerge when you’re not your age. As Jesse’s prof says, “I’ve felt 19 my whole life,” even though he knows what he sees in the mirror. Boy, tell me about it. Jesse knows he’s not 19, but he’s not quite sure what else he knows in this regard. He’s left Kenyon behind, but not really. Has he really moved on? Radnor has put together a very intelligent screenplay here, and some of the bittersweet aspect that accompanies the movie as it progresses, especially what goes on between Zibby and Jesse, comes from the fact that, in fact, we do need to move on.

But it’s also a film about books, and music, and how these can be transformative—or, in some cases, limiting. The letters–real letters!–between Jesse and Zibby about music are some of the loveliest moments in recent cinema. Radnor makes good use of Infinite Jest (without once mentioning the title—in fact, Kenyon is never mentioned by name either). Everyone here loves books, even the wrong ones—Jesse and Libby have a very funny exchange over her reading crappy teenage vampire novels. He’s scandalized, she’s not. When he tries to take the argument further, she just stares at him with those big eyes as if he’s from another planet. Which, in a way, he is—but, as he recognizes, Kenyon, and places like Kenyon, represent the planet he wants to be on—one where books are the center, where books actually matter.

It’s a place he’s comfortable in, where he can devour books right and left. But it’s not the only place. As Walter Benjamin allegedly said, “Books are not life—but then, what is?” There are lots of book in-jokes, by the way, including at the end, and it’s all very satisfying. I can only think of two movies, and not even recent ones, that have treated literature, books and learning as highly as Radnor does here—The History Boys, and that was a while back, and Il Postino, which was even further back. This is a small company, admittedly, and it’s to Radnor’s credit that he has pulled this off. He makes you believe in the validity of the proposition. And the place just looks gorgeous—it was filmed on campus. Who would not want to go to school there? (Except maybe in February.) Highly recommended.

Tagged as: art, books, books and how to use them, Education, film