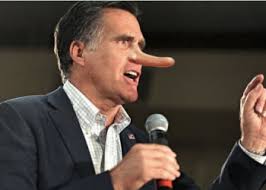 I didn’t watch the debate, so all I have is a bunch of second-hand information. Watching it would have required staying up until 3:00 in the morning here in London, and while the Patriots in the Super Bowl will get me to do that, and the actual election night returns, this didn’t seem worth it. And it wasn’t, although not for the reasons that many expected. So now we’re seeing lots of commentary from the blogosphere to the effect that—wait for it—Mitt Romney lied. A lot. This seems to be making a number of people feel better, especially people who were disappointed in Obama’s performance. That group probably includes me, although I’m with Booman in thinking this actually doesn’t change a whole lot about the dynamics of what the actual election returns will look like. Still, Mitt Romney lied.

Meanwhile, the unemployment number just came in much better than expected, which will probably bring a sigh of relief in the White House. And Jack Welch, former CEO of General Electric, is already accusing the Obama administration of manipulating the numbers. This somehow gets tons of media coverage. But, you know, Mitt Romney lied—where does that get covered?

Jeez. Mitt Romney has been lying for six years now, ever since he started running for President. He’s really been lying all over the place the past two. Even his opponents in the primaries called him on it. And lord knows every political and economic blogger that I read regularly, and there are a lot of them, have been gurgling on about Mitt Romney’s incessant, serial and almost pathological lying. This has become especially true since, and of, the debate.

But you know what? It doesn’t matter—we’re just telling this to ourselves because it makes us feel better. We’ve still got about 45% of the country prepared to vote for the guy, lies and all. Over at the excellent Washington Post Plum Line blog, Jonathan Bernstein’s post yesterday conveyed this. I reproduce it in full (although without the links—go to Bernstein’s post for those):

Happy Hour Roundup
By Jonathan Bernstein
I said earlier that the question was whether the press would focus Mitt Romney’s challenges to the truth, but I didn’t supply examples. Don’t worry; lots of them here in the Roundup:
1. Ed Kilgore on the audacity of mendacity.
2. While Steve Benen tracks possible signs of a conventional wisdom shift to talking about Romney and the truth.
3. Great takedown by Dylan Matthews of Romney’s phony numbers on small business taxes and jobs.
4. Romney’s green jobs numbers? Hooey, too. As Kevin Drum documents, “about half” works out to 9 percent.
5. The $5 trillion whopper on taxes, from Brian Beutler.
6. Yeah, the pre-existing conditions line was nonsense too, as Paul Krugman points out.
7. Working America has a long wrap-up of Mitt’s mendacity.
8. Chris Hayes recognized one of Romney’s lines about taxes and the rich and thought it sounded awfully familiar.
9. The Washington Post’s editorial board gets it: Romney’s tax plan would explode the deficit.
10. And I might as well toss in my own summary of all you need to know about Romney’s tax plan.
11. Oh, another on taxes: Andrew Kaczynski notes that Romney’s position on taxes and the rich last night is exactly the opposite of what he said during the GOP debates.
12. As for Obama…Irin Carmon on how he botched the story about his own grandmother.
13. And he forgot to talk about his jobs plan, as Matt Yglesias noticed.
14. Not to mention the point long-time Romney watcher David S. Bernstein makes: “Seriously, at this point if you’re surprised at Romney dishonesty, that reveals a very serious flaw in your judgment.”
15. Away from the debate, don’t miss an Alec MacGillis expose about one Mitt Romney donor and how he supported the campaign.
16. How did the fact-checkers do? Margaret Sullivan has a good item. Key question: will the fact-checkers find a way to stay in the story now, or will their push for immediate results wind up further taking them out of the main news coverage?
17. And stepping back to the horse race: John Sides works out how much the debate may move voters.

All worthy stories, all focusing on the fact that, you know, Romney lied, like a lot. I don’t mean to pick on Bernstein—he’s an excellent political blogger. But every link he provides, except for the Post editorial site, is another liberal blogger. Yes, we read them, or blogs like them. But so what?

This isn’t “the press.” I’m sorry, but it isn’t. It’s all preaching to the converted. We all know he lied. And we tell each other he lies all the time. “Wow, did you see Romney’s latest lie?” “Yeah, wasn’t that something?” This will sure hurt him when it gets out, I bet.” “Oh yeah, he doesn’t have a chance.” “Great.” Yada yada yada. But most of the print media, and the vast majority of the broadcast media (which we do get some of here in the UK), hasn’t been directly dealing with the story. And certainly the tribe in Washington hasn’t been touching it for years. Why would they start now? Out of sheer embarrassment? Was Jim Lehrer really going to call Romney out on Wednesday? Is the gormless David Gregory ever going to call Romney, or any Republican, out on their outright lying, ever? Chris Wallace, not known for his incisive interviews (the term softball comes to mind here), looked like he might be mean to Paul Ryan the other day, but let him off. That’s about as good as it’s going to get. We can complain all we want about Obama’s performance, and the fact that he clearly could have been more aggressive against Romney. But you know what? Romney’s been getting away with lying for years because the media has been letting him get away with lying for years. It’s as simple as that. Why should the rules change now?

So Romney lies. Big deal. Until the CBS evening news actually leads with a story that Romney is a serial liar, or the AP starts a feature titled “Mitt’s Lies of the Day,” why should we expect anything to change? In 2004 the American people, in their wisdom, re-elected someone they probably knew had lied them into a war, but they went ahead and did it anyway. Nothing anyone in the blogosphere has done over the past year has achieved much traction in the MSM; meanwhile, CNN has hired Eric fucking Erickson. CNN is suddenly going to start talking about Romney lying to everyone about everything? Paul Krugmann has been banging on about this for a year as well—and about Paul Ryan for even longer, I believe. So the paper of record, for whom he writes, and which also brings us Tom fucking Friedman and David fucking Brooks, hires Ross Douthat—after giving William Kristol some space. Searching for truth among this crew is like—well, words fail me here.

Look, start with the proposition that 27% of the American electorate is insane. Where does that number come from? That’s the percentage of the vote that Alan Keyes received when he ran for senator in Illinois in 2004 against Obama. They’re certainly not going to care that Romney lies. Those primary voters who voted for Romney—do you think they didn’t notice, and now they’ve cottoned on to Romney’s lying, they’re not going to vote for him now? Those useless and clueless independent voters that everyone is courting? Who turn out to be willfully uninformed? They’re going to give a shit?

Get a grip, people. If Romney’s lying hasn’t had an impact on the dynamics of this race so far, why would it have an impact now? Romney has tons of other baggage that people might, and should, actually care about. The Bain story should be a killer—this background alone should disqualify him, especially given the controversy over Sensata these days that Bain has gotten itself involved in. What he did with all that money he’s been collecting over the years, and just why is some of it in the Cayman Islands?—people should be banging on about that a lot more than they have. His foreign poicy is pretty identical to that of the people who bogged us down in Iraq and Afghanistan—that should count for something. These stories have worked over the past several months.

Ads saying the Romney lies just aren’t going to cut it. Let’s move on to something that might actually influence how people might vote. Mitt Romney lying isn’t going to matter one way or another.