Two steps that are guaranteed to eliminate diving in soccer

ESPN FC blogger Roger Bennett today asks an important question: Is diving ruining the game of football? It’s impossible to deny that flopping is rampant, in England and elsewhere, and it’s equally difficult to argue that it’s having no damaging impact on the game. Outcomes are routinely altered because a skilled diver hoodwinks a referee at a crucial moment, and worse, when the refs get cynical enough about all the “simulation” going on that they disregard an actual foul that should have been a penalty. 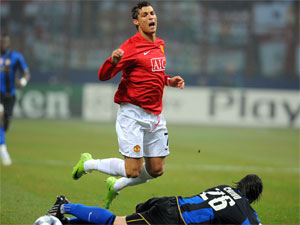 The subject is especially concerning here in the US, where diving has become a talking point for those who hate proper football. (I never understand these people, to be honest – diving isn’t the reason they don’t like soccer at all. They don’t like soccer because somehow they believe you have to choose between it and American football. If diving was that offensive to them, you’d hear them carping about the Houston Rockets a lot more, wouldn’t you?)

Bennett poses what seems to be the $64,000 question: what can be done to rid the game of all the play-acting? He offers one suggestion and hints at another, so let’s begin there.

First, to the idea that clubs and players can clean the game up themselves: nice fantasy, but let’s face it, players and clubs are the problem. Diving has been worsening for years and if there were any appetite on the part of those who play the game, this wouldn’t be the case. And clubs want to win, so they’ll adapt to the context however they have to. If diving were hurting them, it would be ended. Overnight. But it isn’t hurting them. It has become part of their game and they have learned how to make use of flopping. Basic Darwinism.

Bennett notes that once upon a time, English players would pull a dramatic newcomer aside and explain that this isn’t how it’s done here. Stay on your feet, lad. He uses the example of Cristiano Ronaldo’s arrival at Manchester United, where old boy Gary Neville ripped him a new one. Fine, but there are a couple reasons this won’t work today. 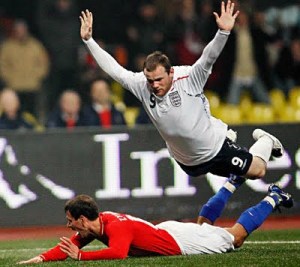 For starters, look at United (since we’re holding them up as the shining light of all that is proper in football). Their leader right now is Wayne Rooney. Who is he going to pull aside and chastise? Nobody, because over the past couple of seasons he has become perhaps the most accomplished English-born diver in the world.

Further, teaching the newcomer to stay upright is a function of having a culture of staying upright. A generation ago, England’s league was populated primarily by English players, but today, especially where the top clubs are concerned, the rosters are a veritable United Nations of cultures. In this environment, it would be nearly impossible to assert the “English way,” even if we assumed there still was such a thing, which would require us to overlook the chacanery of the likes of Rooney and teammate Danny Welbeck, who goes down like a five-dollar hooker when the fleet is in. No, where simulation is concerned, the rest of the world has influenced England, not the other way around.

Culture matters here. A lot. Recent discussion about diving in the Premiership has heard no less than Man U boss Sir Alex Ferguson, who is perhaps the greatest manager in football history, suggesting that foreign players go to ground more easily than the natives. (Yes, I know – his facility for ignoring the dramatic accolades of his own players is remarkable, but let’s set that aside for a moment.) The simple fact is that certain footballing cultures are more tolerant of (if not actively supportive of) diving. To generalize, cultures of Latin derivation are worse than their Germanic counterparts. Africans aren’t as bad as the Latin world by far, but are probably a bit worse than the Germanic. I have not watched enough Chinese, Japanese and Korean league matches to speak with authority, but what I have seen suggests that diving is not a meaningful part of the Asian game. It isn’t unheard of in North America (I vividly recall losing a tournament final when an opponent, near the end of the game, veered hard into me in the box then executed a Full Rooney with a Half Twist, completely bamboozling the ref), but it’s not a significant issue here.

Specifically, South Americans are terrible about flopping (although the Brazilians, in recent years, strike me as being better than the rest of the continent). In Europe, the Italians are a Verdi opera from the opening whistle. The Spaniards are atrocious (especially when Barcelona and Real Madrid square off). And the absolute worst on the planet are the Portuguese.

A few years back, Javier Macherano and Carlos Tevez arrived in the Premiership from Argentina. And quickly developed a rep for diving (Tevez in particular). In an interview I read a year or two later, Mascherano (now with Barca) talked about their struggles to adapt to the English game. He explained that they had been informed by teammates that diving was not acceptable in England. But this was a bit of culture shock, because in Argentina, diving is a part of the game, he said. It was considered a great thing if you could flop and fool the referee into awarding you a penalty. In short, cheating to win was an honored practice (my words, not his). You don’t have to spend much time watching world football to understand how thoroughly this ideology permeates large parts of the landscape.

Bennett, at the end of the article, points to MLS as a possible model for cleaning up the game.

[Peter] Walton now plies his trade in North America as general manager of the Professional Soccer Referees Association, and he believes the Premier League will only solve its diving dilemma if it takes a leaf out of the pioneering MLS’s book and sets up an independent disciplinary committee to review player simulation and hand out bans and fines retroactively, as in Serie A…

I had no idea Serie A was doing this, but kudos to them. The fact is that leagues have the replay technology to eradicate diving from the game in the span of a month and they largely have refused to use it. More on this solution in a few moments.

The piece that Bennett doesn’t discuss, and in fact I can find no one anywhere discussing it, concerns officiating. The sad truth is that one of the biggest reasons players dive is because of the referees, who often leave them little choice. Watch a full weekend of professional soccer. Watch several leagues. In all cases, you’ll see that in pretty much every game there is at least an instance or two where a defender commits a foul that isn’t called, and in doing so allows said defender to deprive the attacking side of a potential scoring opportunity. If you played soccer, you know that you can ruin an opponent’s run with the slightest nick. You don’t have to waste him with an obvious tackle. Clip his heels a bit as he steams toward the goal. Now, when this happens, he either stays up, although he stumbles, loses his control and allows the defense to collect the ball and clear it out of danger, or he goes to the ground. There’s an art to fouling a player just enough that he loses control for a second but not enough that he can plausibly fall down.

If he stays up, there will be no whistle. If he goes down, there probably will be. But in each case, the defender has committed an infraction. So, say you’re the attacking player. The honorable thing to do is to stay up as best you can, but if you succeed, you have hurt your team and rewarded a foul by the other team. Over time, you come to understand how the system works, and the instant you feel you have lost your advantage and your control of the ball, you fall down. It’s the only sensible thing to do.

Two Steps to a Real Solution

Back to Bennett’s question: how can we eliminate diving from the game of football? Here’s how I’d do it.

1: Referees should be instructed to blow the whistle when a foul tackle deprives a player of the ball or of a scoring opportunity, regardless of whether the fouled player goes to the ground or not. In other words, call the foul, not the final resting place of the body. This will make for some annoyance at first, no doubt, because it is so completely at odds with how the game is currently called. Over time – and I’d expect the adjustment to be a couple of games, not a couple of years, because players are quick to adapt to how things are being called – you’ll see far less diving because there will no longer be a need for it.

This will address what we might call “honest” diving – where there was actually a foul. Referees would be evaluated according to how effectively they made these calls, which admittedly are not always easy. I also acknowledge that the end result might be a less physical game than we see now, especially in leagues like the Premiership, but that’s the general direction the game is heading anyway, and anything that results in greater fluidity and perhaps more scoring opportunities should be easier to market.

2: League officials should institute an aggressive program of game video review to identify and punish diving. Here’s the fun part. You may fool the ref (and the linesman), but you’re very rarely going to fool the cameras. In cases where a player is suspected of diving, video would be used to determine if, in fact, there was a foul. If there was not:

That fourth bullet is how we rope club administrators and managers into the task of changing the league’s culture.

I assure you, enactment of these measures would eradicate diving from football in a matter of a few weeks. These steps would make clear that this behavior will not be tolerated, and we’re willing to penalize you and your club harshly if your cheating threatens the integrity of the game. Period.

Until these sorts of actions are taken, diving will continue to erode fan confidence in and enjoyment of the game, and in places like the US that has an expensive price tag.

Something to think about….