The young and the disenfranchised

This election cycle seems to be fraught with the idea of voter fraud. The idea that thousands of unregistered or wrongly registered voters would stuff the ballot box and sway the electoral college away from a “true” winner.

To be honest, I have heard only one story of voter fraud in my lifetime, and it was my grandmother.

In the 1960s, my grandfather went blind. He used to take my grandmother into the voting booth with him and asked her to push the buttons for his chosen candidates. I know for a fact she didn’t always pick the candidates he asked her to. 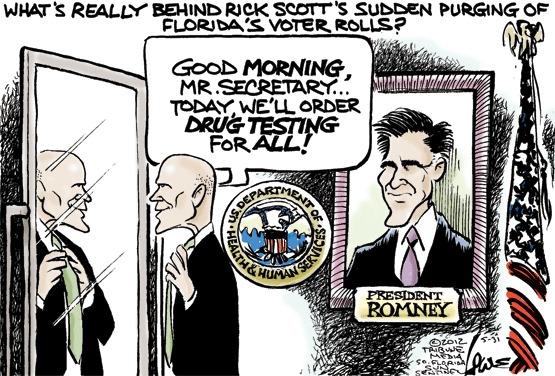 Outside of this isolated family incident, this Red Scare of voter fraud is disproportional to how much voter fraud actually happens. It’s rare and almost negligible compared to how many legitimate votes are cast each election cycle. The effort by over a dozen states to purge their voter rolls is an overblown response to an almost non-existent problem – and it affects minorities and lower income voters more than anyone else.

Now the news has been following this closely, and they should. It’s a big deal. Minorities in particular are hugely affected by the Voter ID laws and other disenfranchisement measures, and after years of fighting for civil rights, they’re suddenly being denied again. Lower income voters are being purged as well. And senior citizens who don’t drive or have ID, who have been voting for years, are suddenly being denied a right they’ve had most of their lifetimes.

But it’s also important to note that students are being shut out as well. And the ways that The Powers that Be – rather, The Powers that GOP – are doing this are not only devious, but pretty simple.

The first thing to go was Same Day Registration. As of this year, voters are allowed to register and vote that same day in eight states –Maine and Minnesota adopted the practice in the 1970s, but recently got rid of this option in an effort to quell students, minorities, and recently nationalized citizens from voting. Maine brought the policy back with a 2-to-1 “people’s veto” in 2011, but Minnesota has not. And while California recently passed laws allowing Same Day Registration, they conveniently don’t go into effect until January of 2013.

Once a student is registered, the easiest way to shut them out is by requiring identification. If a student is going to school out of state, as many do, they most likely have a license or state ID from their home state. And while voters can usually register without an ID so long as they have an address within that state, that registration is nothing unless they can actually vote. For example, if a student went to college in New York and registered with their college address, but retained their driver’s license from New Jersey with a different address, that student can be shut out from voting.

Leaving aside those college students lucky enough to have a passport – which doesn’t have an address listed and bypasses the problem that licenses have – the next most common form of photo ID is a college-issued student ID card. But as of this election cycle, departments of elections in Tennessee and “purple states” Wisconsin and Pennsylvania have disqualified student IDs as valid identification for voters.

Furthermore, if they do register at school, they better make sure they put the correct address. Just last week, Ohio tried to purge thousands of students off the voter rolls for failing to list their dorm room in their voter registration, making their addresses in dorms suspicious (this has since been thrown out by Ohio courts).

If students manage to jump through all of the registration hoops and actually get to the polls, boards of elections can still stop them from voting by waiting them out. Ohio is a great example of this. In 2004, smaller towns like Gambier, Ohio – home of Kenyon College – had voters, many of them students, waiting in line for 10 hours or more to cast a vote. With classes and other commitments, how many students would stay?

Turns out, a lot.

Like other groups currently being disenfranchised, students traditionally lean left and vote for Democrats and Independents. I don’t mean this as a blanket statement, obviously there are Young Republicans out there who also exercise their right to vote, as well they should. But generally speaking, young people vote blue. They have for years now, this is nothing new.

What is new is the number of students turning out for elections. In the 2008 election, over 23 million young people under 30 voted – more than Clinton’s record turnout of youth vote and the biggest increase since the Vietnam War. And they overwhelmingly voted for Obama.

Now obviously any voter disenfranchisement sends a dangerous message about civic engagement to those shut out of the polls. But throughout childhood, young people are told voting is a right, a civic duty and a privilege that other, less “civilized” nations don’t have (although after seeing some of the campaigning this cycle, I don’t know how “civilized” we actually are).

To see young people show interest in their country’s future, and what laws and policies they will have to live with for years to come, is not only admirable, but a sign of personal responsibility and pride in the United States – tenants of the Republican party. So for the GOP to shut the voting booth curtain in students’ faces is hypocritical, and to deny students a say in their own futures is foolish, wrong, and frankly, un-American.