Just why do nations fail, anyway?

Way back in 2002, when George W. Bush was trying to muster an international military force to take out the Taliban from Afghanistan—how’d that work out, by the way?—one of the arguments he used was that Afghanistan was a “failed state.” As I recall, he tried to use that argument for Iraq as well, although he used others that had a bit more persuasion at the time—WMD. We do know how that turned out. But he was was actually on more solid ground with his failed state argument—Afghanistan, by any number of measures, has not been a state worth emulating for some time. It was a classic failed state by any measure—economic, political, legal, educational.

What constitutes a failed state? There are any number of measures—low income levels, low degrees of educational attainment, corrupt legal systems, lousy economic growth (frequently, but not always), dominant political and economic elites–the list goes on. There are all sorts of measures adopted by international agencies, but it’s also a bit like pornography in Potter Stewart’s famous phrase—you may not know how to define it, but you know it when you see it. Zimbabwe is a failed state, cricket team or not; Botswana is not–and South Africa may be becoming one (there are some worrying signs here). Somalia is a failed state, Egypt is not. North Korea is; South Korea is not. Iraq may or may not have been a failed state under Saddam Hussein, although it was considerably better off than some of its neighbors; Iran was, and is, not.

Just why do states “fail?” That’s simple, really–almost invariably, because they are poor, and if there is any wealth, it’s held by the controlling elites. And why are states poor? Or, to ask the question more broadly, why are some states poor, and some rich? This is a much trickier question, one that has generated arguments for several centuries now. The first biggie here was Adam Smith’s The Wealth of Nations, which tended to dominate thinking here for some time. My own thinking, such as it is, on the subject has been strongly influenced by The Wealth and Poverty of Nations, by David Landes, which was published nearly 15 years ago. It’s still a book I recommend to friends, in spite of its recent newsworthiness, which I’ll get back to below.

But it’s not the only one I’m going to recommend these days, because Why Nations Fail, by Daron Acemoglu and James Robinson (A&R), has been generating a fair amount of interest and, indeed, controversy since its publication earlier this year. It’s a big fat book that covers a whole lot of ground, and comes at the question pretty directly. Why do nations fail? Because, according to A&R, they have not developed the right set of political and economic institutions. This may seem pretty commonsensical, but in fact most explanations of the success or failure of nations has involved a series of mixed explanations—cultural, environmental, economic, political, whatever. A&R state pretty flat out that the cultural and ecological ones don’t have sufficient explanatory value—citing examples such as Nogales, Texas, which is reasonably well off, versus sister city Nogales, Mexico, which is not. They also dismiss the ecological/environmental argument made most recently by Jared Diamond in several books (Guns, Germs and Steel and Collapse)—A&R refer to this as the Geography hypothesis. These, they suggest, do not explain the relative success of, say, South Korea versus North Korea.

According to A&R, it boils down to the interaction of political and economic systems. Some systems are inclusive—they are open to new members and new ideas, and have the ability to change over time. Some systems are extractive. And what has worked—what has actually generated a combination of economic progress and political stability—has been a combination of inclusive political and economic systems. The explanation is long, and the examples profuse and varied, but it’s an argument that makes sense. Inclusive economic systems are ones that share the wealth, encourage economic and technological innovation, establish secure property rights, and allow for “creative destruction”—economist Joseph Schumpeter’s wonderful formulation of why capitalism works. Inclusive political systems are ones that both spread power out—allowing everyone the vote, for example—but still have a sufficient concentration of centralized power to actually get things done.

Extractive systems, on the other hand, are designed to do just that—extract wealth from the economic system to enrich the few at the top at the expense of the many. History is full of these—any slaveholder society, for example. The feudal system before the Black Plague in Europe wiped out half the population. The Soviet Union. Communist China, up to the 1980s. And extractive political systems are ones where the elites remain in charge, even after revolutions, where one set of elites is replaced by another set. So what are the successful systems? England was the first, through a unique combination of circumstances. France after the revolution. America—North America, that is, not South America. North America was too sparsely populated to form slaveholder-type extractive economies such as developed in South America; ditto Australia. There are others—Japan, and more recently South Korea. Far fewer than the other kind.

A&R pack the book with plenty of historical examples, and, I have to say, they’re generally persuasive, at least from my point of view. I’m not an economic historian, but I don’t think I can fault their scholarship here. And I’ve oversimplified their arguments to a considerable extent—there’s a bit more nuance to their thesis than I’ve summarized. But not much, actually—A&R are shooting for a simple theory that will explain, well, nearly everything. That’s why they call it a theory. It’s a good read, too—the story they tell is told well, and they know how to make an argument. They have a Web site, too, which they update regularly—keeping the conversation going. The book itself has gotten mostly but not entirely positive reviews—see here, here and here for a fairly representative sample. For some more critical and expansive reviews, see here, particularly for some discussions of implications for development policy, and Clive Crook’s review at Bloomberg.

But not uniformly. A number of people remain only partially convinced—including Jared Diamond, who reviewed the book the The New York Review of Books, prompting an interesting exchange with A&R. Others, such as Jeffrey Sachs, are even less complimentary. But it has generated considerable debate, which can’t be a bad thing here—this is a hugely important subject, with real-life implications. Should we restructure foreign aid along the lines that A&R indicate? Is the World Bank model of aid inherently flawed? These are significant issues, and A&R offer pretty compelling arguments that our current models of aid, for example, could do with a re-think.

They also offer some interesting discussions of the implications of their approach for contemporary international relations. China, for example, provides an interesting current example of a country that has moved towards inclsive economic systems, but has preserved an extractive political system. A&R point out that, in the past, such combinations invariably have ended badly. Is there any reason to expect China to be an exception? A good question, since they also point out that Modernization Theory, the widely-held current view that market economies eventually move toward democracy—as articulated, if that’s the word, by dunderheads like Tom Friedman in The World is Flat—-has actually very little historical support. So expecting China to become more democratic may not be the sensible thing to do.

And yet, and yet…I’m prepared to accept what they offer. But still, I have the nagging feeling that it may not be the whole story. Or that the prism that they offer—a purely political and economic one, one that dispenses pretty much with culture or geography as a meaningful constraint—is necessary, but perhaps not sufficient. In fact, thanks to Mitt Romney, I now find that one of the books I have found most interesting to read in the past two decades is one that he calls one of his favorites—David Landes’s The Wealth and Poverty of Nations (TWAPON). (His other, needless to say, is Diamond’s Blood, Germs and Steel—but Diamond himself has indicated that Romney clearly doesn‘t understand his book, probably hasn’t read it, and has missed the point of Landes’s book as well. A&R have weighed in on Romney as well.) Landes, like A&R, undertook a very ambitious task—to explain why some nations are rich and some nations are poor. Again, like A&R, he posits an intriguing scenario—North and South America were roughly the same place five hundred years ago, yet went in entirely different directions. What accounts for this? 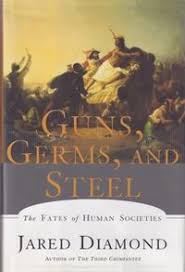 Unlike Diamond, who takes a largely ecological/environmental approach (largely, not completely, it should be noted), Landes looks at a number of different factors—too broad a range, in the opinion of some. Yet I found it to be extraordinarily stimulating, simply because the historical evidence presented in TWAPON suggests that, in fact, there often are multiple factors involved. Take A&R’s discussion of Latin America, where they cite the imported encomienda model as an example of the congruence of political extraction and economic extraction, resulting in a slave-based economy that has never really moved into a fully inclusive economic system—because, in fact, the political system remained in the hands of a few elites, rather than being broadened. Yet nowhere in the A&R discussion is there an examination of the particular culture of Spain and Portugal as influenced by the Catholic Church, which resulted in severe limits on immigration by anyone other than Catholics from Spain or Portugal. This seems relevant somehow—in fact, Landes discusses its relevance in some detail, and it’s an interesting discussion in and of itself. And a persuasive one as well.

And this is where you want to know more. A&R go through plenty of detail in their arguments in support of their theory. But it isn’t really a theory as I understand theory—a true theory can be falsified, and I can’t really think of a way to falsify A&R—all I can do is suggest alternate explanations, as Landes and Diamond have done, for the same phenomena. So, as in the South American example where Landes and A&R overlap, but don’t necessarily preclude each other, what then? Do I prefer A&R’s explanation because, pace Occam’s Razor, it’s simpler? This is history we’re talking about, where sometimes complexity is the way to go—because humans, and history, are often complex. And so I’m slightly dissatisfied, but mainly because I don’t know enough. Not with the book—it’s great fun to read, and to sift through their arguments. But with my own ability to fully analyze their arguments, because I clearly don’t know enough as they do. But that’s true for Landes and Diamond as well, so I’m not really in a position to say that any one of these approaches is superior to the others. Diamond said in his review that A&R’s approach probably explains 50% of what they want to explain. Aside from being a bit baffled about where he got that number, there’s also a part of me that thinks that 50% isn’t bad at all—it’s knowing which 50%.

For all that, A&R have written a hugely stimulating and, indeed, entertaining book that I enjoyed reading immensely. I like to think it made me smarter, and maybe it did. But if you read it, be prepared to move on to Landes and Diamond as well. It’s all interesting stuff, and lord knows it’s important enough.