High noon in the garden of polite and evil: the ugly truth about "Southern hospitality" (by a guy who grew up there) 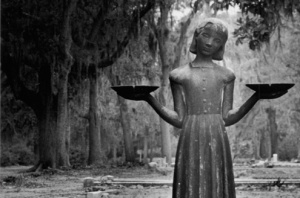 I grew up in the South. I have lived roughly 33 of my 51 years below the Mason-Dixon and past the occasional trip for business or to visit friends and relatives I shan’t be going back. The reasons are numerous, but the one I’m concerned with today involves that most sinister of myths. I’m referring, of course, to Southern hospitality. To the idea that Southerners are so damned nice. Polite. Friendly. Cordial. Welcoming.

This is great as marketing and ideology. The reality of things is somewhat more…complex.

Oh, sure, Southerners smile. They’re certainly well-mannered when it comes to their treatment of others. Outsiders, though, tend to take these behaviors at face value, and in doing so they routinely fail to understand what’s actually going on. To wit, Southerners are frequently insincere. Not always, of course, but the culture of the place is dominated by a cult of manners that makes the court of Louis XIV look like a hootenanny up at Ernest T. Bass’s place by comparison. While it’s important to be nice to those you like, it can be even more important to be nice to those you hate. Heck, the more you hate ’em, the harder you smile. For instance, growing up I learned the value of “killing them with kindness,” as perverse a concept as I have ever encountered. And we were mere working class, veritable hillbillies next to the moneyed classes that perfected this foolishness.

I’ve traveled all over the US on business and pleasure. I have lived in the Midwest, the West, New England and New York. I have friends, acquaintances and colleagues from every corner of the nation. My experience tells me that Southerners are, on the whole, no nicer than anybody else.

A friend and colleague, a man descended from the First Families of Virginia, once explained to me the “Rule of Three,” which I had somehow missed out on growing up. Let’s dramatize to illustrate how it works.

James: It certainly has been a pleasure visiting with you this fine afternoon. I appreciate you showing me around the grounds and the tea was simply splendid. But I’m due back at the house, and must leave.

James: Thank you, Robert. You’re too kind. But I must go, I fear.

Robert: I beg of you, James, stay for dinner. We’re having roast duck.

James: That sounds marvelous, Robert, and I know what a wonderful cook Molly is, but nonetheless, I must take my leave.

Robert: Well, I hate it, but if you must leave, then you must. Thanks so much for stopping by.

James: I look forward to seeing you again soon, Robert, and thanks again for your hospitality.

See what happened right there? Huh, huh? Appalling, wasn’t it?

Oh, wait, you missed it? Ah. Well, the Rule of Three dictates that when guests prepare to take their leave, you must entreat them not to go three times. If you do the math in the ritual above, you’ll notice that our host, Robert, only asked James to stay twice. In doing so, he either conveyed an insult to his guest or revealed his own lack of cultural grace and familiarity with the shared customs of the community.

Hell, I never knew this growing up. And for all the access I had to the inner workings of genteel, moneyed culture my friend could be pulling my leg and I’d never know it. But I doubt it. There are plenty of ways that class barriers are delineated and enforced in the South, and these sorts of subtleties can be important in the event that an enterprising gomer loses the backwoods accent and finds someone to teach him how to dress. There’s no telling how many times tactics like this one were used to verify my bona fides (or lack thereof). It always seemed to me that the well-heeled and properly connected could smell the thread count on my shirt before I even got into the room. I wasn’t one of them and they knew it.

I sometimes try to explain the cultural arcana of Dixie by reference to John Berendt’s famous best-seller, Midnight in the Garden of Good and Evil. If you’re familiar with the story, you’ll recall that Berendt was impressed with how he was received by the fine ladies of Savannah’s upper crust. It’s a wonderful examination of how people from diverse backgrounds can come together, be friends, find common cause, etc.

Except that I was laughing my ass off, as I’m sure so many Southern readers were. Being an outsider, he really had no way of grasping the nuances of what was actually happening, so he took their politeness as genuine. He never seemed to understand that the help they were so generously providing was mainly about aiming him at those they despised. For some reason, he never thought to question why folk steeped in that cultural milieu would be so cotton-pickin’ happy at the sudden, unannounced appearance on their doorstep of a Yankee intellectual queer Jew-boy from New York City.

In sum, if insincerity and pathologically exclusionary elitism don’t bother you, then yes, Southerners are nice. Very nice.