Scott of the Antarctic

2012 is actually a pretty busy year here in Britain. We’ve had the Queen’s Jubilee, and the Olympics. And some anniversaries. The 200th anniversary of the birth of Charles Dickens. The 200th anniversary of the Battle of Waterloo (although, to be frank, I haven’t actually heard of much in the way of celebration of this). [Hah! That’s because it’s the worng year!–Wuf] And, of course, the centenary of the death of that greatest of dead British heroes, Robert Falcon Scott. Scott of the Antarctic. Who almost was the first to the South Pole, and lost out to that duplicitous Norwegian, and died a hero’s death, with a nobility that has inspired generations of British schoolboys. And it’s true—Scott’s last journal entries, written when he knew he and his remaining companions were going to die (Oates had already wandered off into a blizzard, muttering ”I may be some time”), are heartbreaking.

Because ever since Scott perished on his return from the South Pole, a race he lost to the Norwegian explorer Roald Amundsen, he has been lionized as no other British here has been, perhaps except Nelson. The mythology was so strong, in fact, that when Roland Huntford wrote his debunking of the myth, Scott and Amundsen (published in the US as The Last Place on Earth), in 1979, the Scott family attempted to get an injunction to prevent publication of the book. Because Huntford’s book was damning, and a shocker—Scott was a bumbling amateur compared to Amundsen, who was a pro, from his thorough preparation to his masterful execution. Scott’s reputation has never completely recovered, although there has certainly been some mitigation. Susan Solomon, in The Coldest March, argues persuasively that Scott faced considerably worse weather than he expected—unusually frigid weather even for Antarctica, in fact. Still, it has been pointed out, by Huntford, in fact, that Amundsen faced the same weather, and mastered it.

So the myth perseveres. Which is good, because it allowed for two great museum shows devoted to the subject. The first, over at The Queen’s Gallery earlier this year, was The Heart of the Great Alone. This one mainly concerned the photography relating to the Scott expeditions—and those of Shackelton, Scott’s other great rival—and who, it is correctly pointed out, endured expeditions of extraordinary hardship and never lost a man, unlike Scott, who lost quite a few. This was a wonderful show, with photographs by the two great early polar photographers, Herbert Ponting, and Frank Hurley. Ponting accompanied Scott’s Terra Nova expedition, the one that doomed Scott, and took a boatload of photos, from 2,000 glass plate negatives. Here’s one of the most iconic: 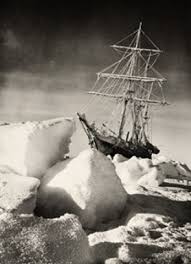 The stories of these photographs are nearly as legendary as the expeditions they portray. Fortunately, they’re all collected in a volume of the same title—The Heart of the Great Alone: Scott, Shackleton, and Antarctic Photography, by David Hempleman-Adams, Emma Stuart, and Sophie Gordon. No serious photographer, or lover of the Antarctic, should be without this book.

And this past weekend we headed over to the Natural History museum for their Scott show, Scott’s Last Expedition. This one had a different focus, and comprised a nice history of Scott’s entire journey, from the fundraising in England (Scott’s first expedition was sponsored by the government, but his second was not), to the journey to New Zealand, which, as Huntford has pointed out, never involved leaving the British empire, and to his two years on Antarctica, and his doomed exploit. There’s quite a lot on the science, because there was a lot of science, including the famous trip in the Antarctic winter (with temperatures regularly at 70 degrees below zero) for penguin eggs that resulted in Apsley Cherry-Garrard’s book The Worst Journey in the World, and it sounds like it was.) In fact, there was a really serious amount of science done, much of which established what is now the modern form of disciplines such as glaciology. But it also focused on the mechanics of the trip, and how everyone lived and worked. In fact, they did a very cool thing—they recreated the hut that all members of the expedition party lived in, laying out the bunks where people slept and the areas where the scientific work was done, as well as where other stuff took place—it’s pretty small. Of course, everyone must have smelled, and everyone smoked cigarettes or pipes like a chimney. So you can just imagine.

And while it was clear that Scott did a lot of bad management—or, at least, contra Amundsen, made a lot of bad judgments—he also had some bad luck. He and the remaining members of his party died pretty close to a depot of stores he had previously laid. But he hadn’t laid it far enough south, because the ponies broke down on that trip. And if the depot had been where he originally planned for it to be, he might have survived. And then there was the weather, which, as mentioned previously, resulted in much more severe weather than previous expeditions—Scott’s first voyage, or Shackelton’s—had experienced. But, still, the issues of British pluck and British arrogance intermingle here so much that it’s hard to determine where the boundaries are.

It’s a compelling story nonetheless, which is why it has survived as long as it has. It’s one of the great tragic narratives of modern times, in fact, and is so bound up with the British travail of watching their best and brightest be blown to smithereens in the first world war, and then watching the empire disappear following the second, that it’s easy to understand why the myth endured. And why, even now, it retains its hold on the British imagination, in spite of numerous revelations about Scott. And in another 100 years, the photographs will still stagger the audience, and the Scott story will still engender a mixture of sadness, irritation and a certain degree of admiration, not necessarily for the man, but for the apparent dignity and grace with which he left us.