Paul Ryan, doing his best for the Special Relationship 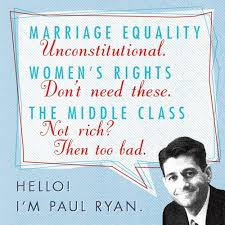 Larison provides us with the depressing but predictable analysis of why Paul Ryan would be a foreign policy disaster—he’s indistinguishable from the Bush people. In fact, it’s the exact same people advising him. Larison also goes into some detail as to why this matters, given two people with virtually no foreign policy experience heading up the Republican ticket. It’s not a surprise, of course. Ryan, like his running mate at the top of the ticket, knows nothing. Meanwhile, the British press has been busy ferreting out stupid and insulting things Ryan has said about the UK. Hmm, that didn’t take long. These weren’t even particularly hard to find. It was even the lead story in The Times Newspaper print edition this morning—and The Times, remember, is owned by Rupert Murdoch. The headline? “Romney Running Mate Savages the NHS.” It’s right there on the website, too, although there’s a paywall, but no matter—everyone else has got the story too.

The Daily Mail—which gave us Who Invited Him? in response to Mitt Romney’s pathetic visit—is not, so let’s go with them first. This is the paper that most resembles The Daily News or The New York Post in terms of its demographics. The Mail brings us a pretty full summary of Ryan’s comments attacking the NHS in a WSJ piece back in 2009: “We need only look to Great Britain and elsewhere to see the effects of socialized health care on the broader economy. Once a large number of citizens get their health care from the state, it dramatically alters their attachment to government.” The Mail also brings us this gem, a speech from January this year:

‘We need to chart a new course. Speaking candidly, as one citizen to another: We still have time – but not much time. If we continue down our current path, we know what our future will be,’ he said in response to Mr Obama’s State of the Union speech.

‘Just take a look at what’s happening to Greece, Ireland, the United Kingdom and other nations in Europe.

‘They didn’t act soon enough; and now their governments have been forced to impose painful austerity measures: large benefit cuts to seniors and huge tax increases on everybody.”

Yeah, well, the last time I checked, there have been no tax increases here in the UK. In fact, there’s been a cut of the top tax rate. And, you know, the UK’s bond ratings are still at triple-A levels—as opposed to those of Greece, which are now speculative grade, and Portugal, which isn’t there yet, but may end up there. The US, of course, lost its Triple-A rating at Standard & Poor’s precisely because of the obstructionism being shown by Paul Ryan and his fellow Republicans in relation to the debt ceiling fracas last year.

Let’s move on. The Telegraph has the same quote. And The Telegraph, being a conservative paper, likes Ryan—or at least the idea of him. Or is trying to like him, anyway. The Guardian is ignoring that issue entirely, instead going with Ryan’s having sold his bank shares after the private briefing from Ben Bernanke and Henry Paulson in September 2008, before the shares tanked. This may be a non-story—or it may not be—but it puts the little twerp in the headlines anyway—good. It’s hard to tell with The Independent, given the fact that they have the world’s crappiest website—they may have something, they may not. And what about the Murdoch-owned The Sun, Britain’s best-selling newspaper? They have yet to mention Ryan at all. If Romney and Ryan play their cards right, they may end up as popular in Britain as Bush was in France.

And for something completely different—anyone who really may think that Ryan knows arithmetic should let Paul Krugman and Brad deLong of the left, and Bruce Bartlett and Tyler Cowen of the right, demonstrate otherwise. The notion that Paul Ryan is the intellectual driver of the Republican Party these days is pretty terrifying. The man knows nothing, and can’t add.