(Part one of two)

When Abigail Adams died in late October, 1818, her husband, John, brokenhearted, said, “I wish I could lie down beside her and die, too.”

Today, the two are entombed side by side, along with their son John Quincy and his wife, Louisa Catherine, in a well-lit, whitewashed crypt beneath the United First Parish Church in Quincy, Mass. I’ve come here to pay my respects to the former presidents and first ladies, but mostly I’m here to say thanks to John, and to remember him because he worried he’d be forgotten.

Most of the Founders knew history would be watching them, so they posed. In paintings, in statues, in memorials, on our currency—they all look so noble, so resolute. They are our American mythology.

But according to historian Joseph Ellis, John Adams “was congenitally incapable of holding the pose.” As desperately as he wanted to be remembered by history, he knew all the posing and posturing was bullshit, so he just couldn’t hold the pose, couldn’t keep his mouth shut, couldn’t keep his pen still. Ellis describes it as “refreshing and often irreverent candor,” but the cost of candor was posterity.

“Monuments will never be erected to me,” Adams predicted in 1819, “romances will never be written, nor flattering orations spoken, to transmit me to posterity in brilliant colors….”

Ellis’ Pulitzer Prize-winning Founding Brothers, published in 2000, first brought Adams to my attention. Among that cast of notables, I quickly developed a fondness for John and Abigail. From there, I turned to David McCullough’s Pulitzer-winning bestseller, John Adams, published in 2001.

a great-hearted, persevering man of uncommon ability and force. He had a brilliant mind. He was honest and everyone knew it. Emphatically independent by nature, hardwroking and frugal—all traits in the New England tradition—he was anything but cold or laconic as supposedly New Englanders were. He could be high-spirited and affectionate, vain, cranky, impetuous, self-absorbed, and fiercely stubborn, passionate, quick to anger, and all-forgiving; generous and entertaining. He was blessed with great courage and good humor, yet subject to spells of despair, and especially when separated from his family or during periods of prolonger inactivity.

In other words, he was human.

Much of this resonated with me, too, because Adams reminded me of myself, albeit it on a far humbler scale. By appreciating Adams’ passion and self-contradiction, I began to better understand those things in myself. Of America’s mythological Marble Men, here was one I could relate to rather than idolize.

That relatability proved to be a great gift because it opened doors that helped me appreciate what the Founders really did. The Fourth of July isn’t fireworks and picnics (pleasant as they are). When they signed the Declaration of Independence, they were literally putting their lives on the line for an idea; had they been caught by the British, they would have been hanged for treason to the crown.

I haven’t been the only person to develop a John Adams man-crush. When McCullough’s biography appeared, visitation at Adams NHP spiked to 167,500—up from 87,300 the year before. By 2009, visitation peaked at 253,600, forcing the park to close the Adams home for part of 2010 in order to make structural improvements to handle the dramatically increased visitation.

The HBO series in 2008, which won thirteen Emmy Awards—more than any other miniseries in history—marked another highwater event. There’ve been other books (Ellis’ Passionate Sage, about Adams’ post-presidential years in retirement, is a favorite), and even the musical 1776, with Adams as the lead character, saw a revival.

The resuscitation of Adams’ popularity has been gratifying to see (and be a part of). Despite his long tenure on the bestseller list, his apparent cache with the Pulitzer committee, and his transformation into cable TV entertainment, though, the slow-moving progress of the Adams National Memorial discourages me. An Adams memorial should sit opposite Jefferson across the tidal pool in D.C.: the yin and yang, the north and south, the voice and pen, of American independence. Even physically, the two complemented each other: the short, stout, older energetic Adams and the tall, lean, younger reserved Jefferson.

His biggest black mark was the infamous Alien and Sedition Acts, which threw political opponents in jail and threatened freedom of press. It was, in its day, a form of McCarthyism, a late-eighteenth century Patriot Act. Even Abigail, who typically had a pitch-perfect sense for politics, thought it was a good idea, although John signed it only “reluctantly.” The acts are hard to excuse, but given the fragility of the new Republic, I can at least understand where Adams’ good intentions were coming from. 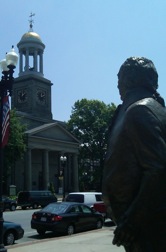 But he kept America out of a war with France at a time when such a war would’ve wrecked the fledgling country. Losing the election was, in effect, proof that he’d done the right thing by resisting the hot passions of public opinion in favor of the country’s long-term survival. “To his dying day he would be proudest of all of having achieved peace,” McCullough wrote.

The presidency was really Adams’ reward for a Revolutionary career that spanned the better part of twenty-three years. His service in the Continental Congress was legendary, where he served on some thirty committees and functioned as the leading voice for independence. He orchestrated Washington’s position as head of the Continental army and Jefferson’s position as author of Declaration. He served as minister to France, the Netherlands, and then Great Britain, and he helped negotiate the Treaty of Paris, which ended the war. (Not to mention his subsequent eights years of service as vice-president, which he called “the most insignificant office that ever the invention of man contrived or his imagination conceived”).

There would be no United States of America if it wasn’t for John Adams—yet America seems to love him and love to forget him all at the same time.

I pay my respects at Adams’ tomb because of these things: certainly, in the largest sense of all, he helped give me the freedoms I now enjoy, and he helped me appreciate the awesome responsibilities of self-governance (often abused or neglected, which would frustrate him apoplectically, I’m sure). Just as importantly, though, Adams helped me better understand myself.

The staff member who greets me has all the Yankee warmth of February, but he knows his stuff and he’s ready to spin yarn. He says “chuhch” instead of “church” and “pahk suhvice” instead of “park service.”

Known as “the Church of the Presidents,” he says—which he pronounces “Chuhch of the Presuhdents”—the United First Parish Church is Unitarian. The parish dates back as far as 1639, but the meeting hall itself was built in 1828 from granite from the Adams family quarry on land set aside by John. There’s a high-domed ceiling inside, and at the far end of the room, I can see the pulpit backdropped by a red velvet drape. There are marble busts of John and John Quincy flanking the dais. Rows of pews face dutifully forward.

After a long, ribbony orientation, he leads me and three other visitors down to the crypt. It’s cool down here. The air feels a little damp. It smells old without stinking of age. The whitewashed walls whitewash away any gloom.

Our guide has to duck to step into the crypt itself, and we follow him in. Four granite slabs nearly fill the space: John, Abigail, John Quincy, and Louisa Catherine. On John’s grave, there’s a flag with fifteen stars; on John Quincy’s, a flag with twenty-four. Flowers have been left on all four; the roses on John’s have dried to a dark maroon.

I expect some sort of stirring interpretation from the staffer or perhaps an inscription somewhere of an inspiring quote from one of the presidents.

No words could be more poignant, though, than the sublime story of Adams’ death. If anything about the American pantheon qualifies as the stuff of myth, it is this: Adams and Jefferson, the two patriots whose intertwining careers best typified the experiment of American independence and governance, who both played seminal roles in the drafting and adoption of the Declaration of Independence, both died on July 4, 1826—the fiftieth birthday of the country they worked together to found.

“Is it the fourth yet?” Jefferson asked from his deathbed before expiring. Adams, from his, said, “Jefferson survives.”

So, too, does Adams, forgotten as he often is compared to his contemporaries. His survival is the less glorious, the less marbleized, the less mythic—and, thankfully, more human. 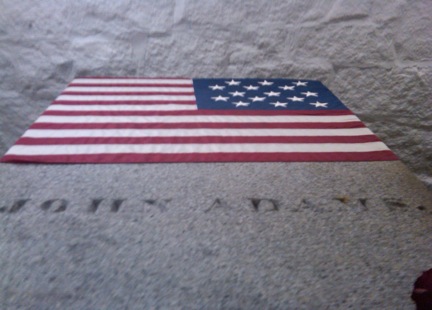