Tell pols to step up: Time to invest in fixing infrastructure woes

That phrase should haunt elected and appointed officials in state and federal governments — especially those who made decisions based on political ideology rather than common sense and the needs of the electorate.

The latest utterance of this phrase came from James E. Hall, a former chairman of the National Transportation Safety Board. As Colorado fights an extraordinary wildfire west of Fort Collins, the national census of airtankers available to drop fire retardant stands at nine aircraft, down from 44 planes a decade ago. These nine tankers, report Jack Healy and Matt Wald of The New York Times, are “ancient planes … hobbled by accidents and mechanical problems, leading to growing safety concerns and calls for a major overhaul.”

Replacement of task-specific aircraft would run to at least $30 million each — a fleet of 100 firefighting aircraft would cost $3 billion. And they are surely and sorely needed.

We have failed to invest.
So many of America’s problems stem from deferred maintenance. Governments have allowed more than a half century to lapse to deal with replacing aging aircraft needed to fight fires and protect lives and property. But the people we elect and appoint to make decisions on using taxpayer dollars to promote the general welfare have failed miserably in other arenas. 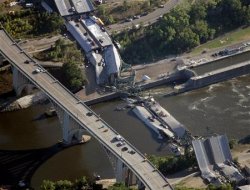 Of the nation’s more than 600,000 bridges, more than 150,000 — 25 percent of them — are obsolete or unsafe due to age and lack of appropriate, timely maintenance. As the American Society of Civil Engineers posted: “The cost of eliminating all existing bridge deficiencies as they arise over the next 50 years is estimated at $850 billion in 2006 dollars, equating to an average annual investment of $17 billion.” [emphasis added] That’s assuming, of course, that some of these deficient bridges will still stand after another half century of deferred maintenance. Who wants to take that bet?

Of the nation’s approximately 85,000 dams, more than 26,000 have the potential for high or significant hazard. If they fail, catastrophic property damage and loss of life would occur.

The number of such dams with emergency action plans has almost doubled in the past dozen years. That’s good. States have also performed well in inspecting these dams. Also good.

States have identified dams needing remediation. That’s good, too. But the number of dams remediated (fancy word for fixin’ em up good) is paltry compared with the number that need it. To be fair: 69 percent of the nation’s dams are privately owned (dams for irrigation, hydroelectric generation, stock ponds, etc.). So private owners as well as state and federal governments have failed to address maintenance and safety issues.

The American Society of Civil Engineers’ 2009 report card on the nation’s infrastructure deficits is chilling. The society hands the national circulatory system a D as a grade. The cost of fixing all U.S. infrastructure needs: $2.2 trillion.

Here are the individual grades:

As Barack Obama and Mitt Romney duel for the presidency, as 435 House seats and a third of the Senate are contested, why aren’t more questions being posed to candidates and incumbents about fixing what structurally ails us?

Remind candidates about bad roads, shaky bridges, and sick dams in your district. Ask: When will they be fixed? How will that be paid for? Ask incumbents: Why have you failed to address infrastructure needs?

Remind them that infrastructure spending by governments is a wise investment.

Also: “On June 13, the agency awarded exclusive use contracts for seven ‘Next Generation’ airtankers. Three will be operational in 2012 and four in 2013. This is the first step in implementing the Large Airtanker Modernization Strategy, which was submitted to Congress in February and recommends 18 to 28 large airtankers.”

How many years will it take to get to 18 to 28 airtankers?