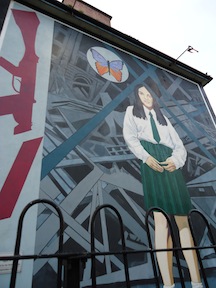 She’s staring at me, her blue eyes wide awake, but I have nothing to say. From outside the bus window, I stare back, entranced. The man a few seats ahead of me is telling me all about her – personal moments that are now engrained as tidbits of fact and history. She’s 14, just come home from school. Her ivory face captured in a complex mix of surprise and serenity – probably nothing like how she looked the moment before she died.

Her name is Annette, and though she’s painted stories high on the side of a building, she’s speaking to me. She died accidentally in a crossfire. A war she had no ammunition for crept into the boundaries of her backyard and took her life. She never had a say.

Painted beside her flowing black tresses is a butterfly. It supposedly portrays peace. But as I look into her painted eyes, I feel everything but peace. I think of her parents finding her slain body. I wonder what she thought seconds before a British bullet permanently closed the doors on her childhood.

The bus begins to lurch away onto the next painted memorial, but my eyes stare into Annette’s until she’s eclipsed by buildings and trees. I sit back in my seat, haunted by what she’s told me.

My friend sitting next to me on the bus feels the same way about Annette. After staring into those painted blue eyes, Erika feels the chills, too.

“Seeing that huge painting of her and the gun in the shot just really struck me,” she said. “It was a real person painted on that wall.”

She was realer still to Tom Kelly, one of the three Bogside Artists who painted her. The three artists paint murals on buildings in the Bogside, in Derry, Northern Ireland, each one depicting a different message relating to The Troubles – a turbulent time in Ireland and Northern Ireland where neighbors were pitted against each other for the sakes of land, nationality and religion. Talking to him, I would discover Annette’s true meaning.

A month after I left Derry, Kelly was on my campus, talking about his murals. I found him outside smoking a cigarette and decided to chat about Annette. I needed to know more.

He said he lived on the same street as Annette and would sometimes play with her when they were kids.  To another member of the Bogside Artists, Annette was a cousin. Painting her, he said, was a way of honoring her and all the other innocent victims of The Troubles.

“We were looking for an image that would remember or pay homage to all the innocent victims, non-combatants, people who were murdered or shot or died in very difficult circumstances,” Kelly said. “I think the image of her in her school uniform, exactly the way she was shot, sort of showed that innocence more graphically than anything else we could see or think of, so that was the right image to represent all the kids that died.”

Kelly said that besides Annette, approximately 14 other children died due to plastic bullets. The Bogside of Derry was the spot of Bloody Sunday – a standout massacre in 1972 between the British Army and civil-rights protestors. Protestants and Catholics alike were killed, but Kelly said this mural doesn’t hold a distinction.

“That painting represents all the kids – Protestant, Catholic, Irish and English,” Kelly said. “It’s not about super realism. It’s not about showing off. It’s about what it’s saying and what it means. That’s what’s important.”

For Kelly, what the mural is saying is a message of hope. Painted in 1995, the mural originally depicted a gun, a simply sketched butterfly and a faint cross alongside Annette. However, once the Good Friday Agreement was signed in 1997, the trio came back to the mural and made good on a promise they made when they first painted Annette.

“We told the media that when true and lasting peace comes to Ireland, and kids like Annette are no longer being shot or murdered, then we would come back. We would repaint the gun (and) break it in half. We would put all the color and vitality into the butterfly, and we would also highlight the cross because that speaks of the innocent dying for the guilty,” Kelly said. After the Good Friday Agreement was signed, just two years after they first painted her, the artists came back to Annette.

“That was our cue to go back up the street,” he said. “It was a great day because a lot of the community came out and spent all day watching us.”

Thousands of miles and a month later, I’m away from Annette. Her once-vivid image has faded slightly from my mind, and Tom Kelly’s parting words have warmed the chill her image cast onto me. Looking into his blue eyes, he told me he wished I got a sense of hope from Annette like he and the community have. It was in that moment I realized Annette’s battle was not mine to fight. I shouldn’t have a side on the battle that surrounded her other than the side of peace. The people of Derry have made peace. Annette’s mural has made peace. It was my turn to make peace, too.

If ever I should stare back into her blue eyes, I think I’ll smile, knowing that her battle is won. Hope resides with the people of Derry. It resides within me, too.