The Walking Dead, part three: The Rise of the Governor

How does a bad guy become a bad guy? And how does an author make him a good guy while it’s happening?

That’s the task Robert Kirkman and Jay Bonansinga set for themselves in The Walking Dead: The Rise of the Governor. The two men take one of the most notorious villains from Kirkman’s graphic novel series and cast him as the protagonist of their prose novel. Rise shows the governor’s descent into villainy and plants the seeds for his rise to power.

Yeah, there are zombies all over the place, but this is a novel about people—good people gone bad.

Brothers Brian and Philip Blake find themselves inadvertently cast together in the wake of the zombie apocalypse. Younger brother Philip is alpha male, and he disdains his brother, but he also believes “kin is kin” and so exhibits impatient loyalty toward his simpering sibling. Also part of their band of survivors is Phillip’s daughter, Penny, and Phillip’s best friends, Bobby and Nick.

There’s a lot of moving from place to place as the survivors try to find a safe haven, although very little actually seems to ever happen. There’s lots of zombie-destroying mayhem, which the pair write about with glee. Sure, graphic novels offer a chance to show grisly, grimy gore, but sometimes a picture is not worth a thousand words. For example, Philip barrels an oversized SUV through a city street choked with zombies:

The strangest part is the continual repetitive flashes of similar tissues and organs—some of them recognizable, some of them not so recognizable. Entrails fly in all directions, splashing the windshield and sliding across the hood. Little kernels of teeth periodically gather in the wiper blades, and something else, something pink, like little pearls of fish roe, keeps collecting in the seems of the hood.

Philip carries a lot of anger with him, and while it always simmers just under the surface, it takes less and less to make it start hissing and frothing and roiling. “Philip is the baddest monster of them all, and he’s going to make it through this ocean of shit if he has to tear down the entire universe,” the authors write.

As a strong character, though, Philip is compelling. His desire to protect Penny and even Brian make him laudable because his actions show that he’s trying to do the right thing–even when there is no apparent “right thing” in an apocalyptic world full of bad choices and walking dead–and that’s how the authors keep him sympathetic. Brian, as wimpy as he often comes across, is also sympathetic because he provides the moral counterbalance to Philip’s man-of-action attitude. 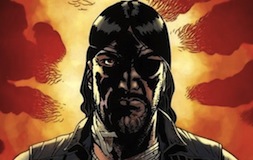 Readers of the graphic novels recognize the Governor as an outwardly charismatic man who is deeply, deeply twisted—so much so that he keeps his zombified daughter tied up at home on a leash and feeds her fresh scraps. The backstory behind all that gets fully explored in the novel, but Kirkman and Bonansinga throw in a surprise twist that would make Rod Serling and M. Night Shyamalan swap heads.

As far as literature goes, The Rise of the Governor is closer to the gutter than the stars, but as thrillers go, it’s well written and avoids cliché and melodrama (oh, if only the Dawn of the Dead novel had been this well written!)

Apparently, a sequel to the prequel, The Road to Woodbury, is slated for release in the fall. By then, Season Three will be in full swing on AMC, which will finally feature the Governor’s first appearance (as portrayed by David Morrissey).

By that point, I hope that I’ll finally have Season Two under my belt. I’ve not yet watched anything past the second episode, saving it as my reward for surviving this semester.

In the meantime, the zombie apocalypse continues…..