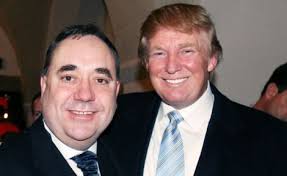 You know The Donald™. He likes to be, well, public. So when he wanted to build a fancy new golf course and super-duper resort in Scotland a couple of years ago, he went public. And after his proposal was turned down by the local planning authorities, he went nuclear and got his good buddy Alex Salmond, leader of the Scottish National Party, to override the local council’s objections, which Salmond, or more specifically his Finance Secretary, duly did. So it looked as if The Donald™ would bring to Scotland something it sorely needed—another golf course.

But then Salmond decided that in order to bolster the case for further Scottish separation from Great Britain, if not outright independence, it needed to become a trailblazer in renewable energy, particularly wind farms, where Scotland claims to have one quarter of Europe’s wind resource capacity. Salmond’s ambitions are high, indeed—the government is currently targeting 100% of Scotland’s energy need be filled by renewable sources by 2020, and there are a number of programs in place to move this along. It’s already at 35% or so, as of year end 2011. So Scotland is intent on becoming a global leader in offshore wind farm development—it has an awful lot of wind, and lots of offshore, so this seemed like a pretty neat idea. The UK plans on installing about 7,000 offshore wind turbines between 2010-2020, and Scotland is targeting about 40% of this, or even more if it can get it.

The Donald™, however, thinks this is a really bad idea, as it turns out. Because it would spoil the view from his new golf course, So he’s prepared to take action. Or at least talk about taking action, which more generally appears to be the rule with The Donald™. So tomorrow he’s going straight to the Scottish Parliament to tell them a thing or two, according to Bloomberg:

The New York real-estate entrepreneur will tomorrow tell lawmakers at the Scottish Parliament in Edinburgh about his opposition to a proposed 230 million-pound ($371 million) experimental offshore wind farm in sight of the golf course he is opening in July. Trump’s warnings about the effect of the wind energy industry on tourism aren’t borne out by the facts, according to the government.

“I am very disappointed with him, these wind turbines will destroy Scotland,” Trump said in a telephone interview on April 19. “Other countries are stopping building them. Alex is 20 years behind the curve.”

“I’m afraid Donald Trump and I are destined to disagree on this matter,” Salmond, 57, said in an April 18 interview in his official residence in Edinburgh. “It would probably be best to allow energy policy of the country to be determined by the people who are democratically elected to determine it.”

I don’t imagine The Donald™ will let a little thing like the fact that he doesn’t actually vote in Scotland to get in the way of trying to determine its energy policy. He feels “betrayed and lied to,” according to Bloomberg, the poor guy. He has even gone so far as to call Salmond Mad Alex, which I guess is pretty mild for The Donald™. The Bloomberg article notes several times that, in all likelihood, The Donald™ actually has no idea what he’s talking about, but neglects to note that this has never stopped The Donald™ before. Still, his testimony before the Economy, Energy and tourism committee, should if nothing else be entertaining. You can actually read it here, and I’m sure The Donald™ did all the relevant research himself. He’s that awesome.

And of course, since life is just full of little ironies, we learn today, also from Bloomberg, that our friends at ALEC are now supporting moves to remove renewable energy subsidies in the US at the state level. Astonishingly, The Donald™ has no relationship with ALEC as far as I can tell. I think he’s missing a bet here.