Is Cheney's heart the product of organ trafficking? 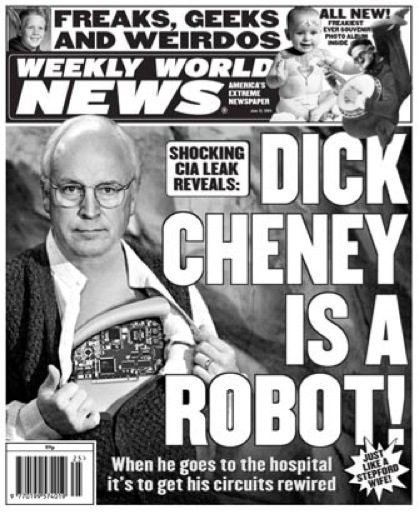 “As he leaves the hospital, the former vice president and his family want to again express their deep gratitude to the donor and the donor’s family for this remarkable gift,” his spokeswoman said in a statement.

Cheney, 71, who has a history of heart problems having suffered the first of five heart attacks at age 37, was released from Inova Fairfax Hospital Heart and Vascular Institute.

He received the heart from an anonymous donor after being on the waiting list for more than 20 months.

The mind reels. Was it a human heart, and if so, why, when a gorilla or shark heart or even a piece of brimstone would have done just fine? If it was human, was the contribution voluntary? Was Blackwater involved?

Isn’t it pretty clear that anyone who has had five heart attacks starting at 37 is someone God wants dead?

I know, I know, don’t wish ill and all that, but this is a genuinely bad guy. Even W reportedly got sick of him by the time it was over. That’s not a very high bar.