The Economist: When is it appropriate to smack my bitch up? Jordanian women: now; Ukrainians: later; Americans: don't know

Douglas Adams was perhaps more right than he knew when he quipped that coming down from the trees was a big mistake.

I like to visualize data with “people in a room” to put things in perspective. Jordan’s numbers are just ghastly, but if the Ukraine is the basis for any optimism we’ve got a long way to go. (See graphic below.)  If, irrespective of wealth, we put 20 Ukrainian women and their spouses in a room, we could be fairly certain that one of the proud hubbies we could look in the eye hits his wife and that she’s okay with that because it’s justified.  A room full of Jordanians would, statistically, seem more like a domestic violence enthusiasts’ club.  Pot luck. Door prizes. Bring your spouse. 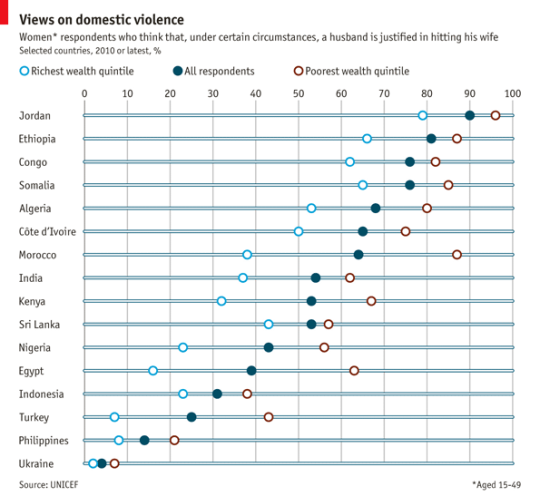 I know it’s not necessarily indicated by the data that the women surveyed are actually hit, just that they think it’s justifiable in some situations, but I have a hard time believing that those women see it in an entirely abstract sense. “Well, my husband doesn’t strike me but some women might just have it coming to them.”

I dread to think what those numbers would look like here in the US compared to other industrialized nations.  We do such a good job of coming in last, after all, e.g., health care, preventable deaths, mandated paid vacation, broadband improvement, overall social spending, and current account balance to name but a few ways. It would be a shame if women’s perceptions of justifiable domestic violence and military spending represent some of the few ways in which we currently excel.

Image credit: Public domain, with appreciation to Colin Henderson for his fine work.