Climate Science for Everyone: Carbon dioxide increases in the air are mostly from burning coal, oil, and natural gas

Update: To read other articles in this series, click here.

Over the last few decades, scientists have learned a lot about how life interacts with the air, land, and sea. And in the process, they’ve made observations that have demonstrated beyond any reasonable doubt that the increasing carbon dioxide in the air is from people burning coal, petroleum, and natural gas.

So how did the scientists put together all the pieces to make a complete conclusion? They started with an understanding of how plants use carbon during photosynthesis. That knowledge showed that the increased carbon dioxide in the air was from plants. Then they formulated some guesses as to where that much plant-based carbon dioxide could come from and, by process of elimination and careful accounting, determined that the source was human consumption of fossil fuels.

But it all starts with the concept of isotopes.

What is an isotope?

If you’ve heard of uranium 235, depleted uranium, light or heavy water, deuterium, or carbon dating, you’ve already been exposed to the concept of an “isotope.”

Every element on the periodic table is made up of a number protons, electrons, and neutrons. The number of protons determine what the element is – hydrogen (1) has one proton, helium has 2, lithium has 3, and so on. The number of electrons determine the electric charge of the atom, and whether it will conduct electricity or react chemically with another atom. And the number of neutrons an given atom has determines the isotope of that element.

Naturally-occurring uranium has two main isotopes, uranium-235 and uranium-238, also notated as 238U. 235U is less stable than 238U, and so it’s used as the fuel for nuclear power plants and the explosive material in fission bombs. The more stable 238U that’s left over from the uranium enrichment process is also known as “depleted uranium”. Light water has two hydrogen atoms bonded to one oxygen atom, while heavy water has deuterium atoms (hydrogen with an extra neutron) instead of standard hydrogen.

Carbon has three isotopes, carbon-12, -13, and -14. Carbon dating uses the rate at which carbon-14 decays to estimate how long ago a plant or animal died. Because all life we know of is based on carbon, the three main isotopes of carbon let scientists understand a lot about how life interacts with the physical world.

Carbon isotopes let us track how life changes the air, land, and sea

Plants use carbon and sunlight to make carbohydrates, the chemical fuel that enables plants, and the animals that eat plants, to live. And when plants make carbohydrates, they use any of the carbon isotopes that happen to be available. But carbon-13 and -14, being slightly heavier than carbon-12, need just a little more energy to turn into a carbohydrate. Since plants are all about getting the most energy they can out of the sun, they convert more carbon-12 into carbohydrates than they do carbon-13, or carbon-14.

Scientists have measured the physical ratio of carbon-13 to carbon-12, often written as 13C/12C, and it’s approximately 1 atom of carbon-13 to every 99 atoms of carbon-12. Because plants use slightly more carbon-12 than carbon-13 as they make carbohydrates, scientists can track how plant life affects changes the ratio 13C/12C. In the course of photosynthesis, plants deplete the amount of carbon-12 in the atmosphere, increasing the 13C/12C ratio. 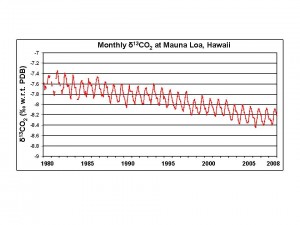 But when living things die and decay or are burned, all that extra carbon-12 is emitted back into the atmosphere, lowering the 13C/12C ratio by increasing the amount of carbon-12.

Scientists have measured a noticeable drop in 13C/12C, as shown in the top figure, since the early 1990s. Scientists have measured drops in the ratio since at least the early 1800s by analyzing the amount of carbon-12 and carbon-13 in corals*. This drop in the 13C/12C ratio can only be a result of one thing – living things decaying or being burned. However, while we know what the source is in general, the change in the ratio itself isn’t enough to say for certain what the specific source is.

The extra carbon isn’t coming from the ocean

The extra carbon isn’t coming from land plants either

So long as plants are alive and growing, they absorb carbon dioxide from the atmosphere and store it away. But when a plant dies, it slowly releases that stored carbon back into the air as rots away The process isn’t fast, but it is largely in balance. This means that the carbon emitted by a rotting tree will be almost identical to the carbon absorbed by the tree while it was alive. After all, it’s not like a tree that stores 5 tons of carbon can emit more carbon that it has stored in its limbs, leaves, and roots.

It is, however, possible that not all the carbon will be released, resulting in some amount of storage of carbon in the land. Decaying leaves, plant roots, and tree limbs are incorporated into the soil or turned into peat or permafrost, where the carbon remains stored until something triggers a release. And just as the deep ocean stores a significant amount of carbon, so too do soils.

So it’s hypothetically possible for all the increase in life-sourced carbon dioxide to be coming from soils. But scientists have tested this hypothesis specifically, setting up parcels of land and very carefully tracking how much carbon dioxide was absorbed or emitted over the course of several years. Scientists then used those observations to estimate how much carbon dioxide is being added to, or subtracted from, the air by plants.

They found that plants are absorbing more carbon dioxide than they’re emitting, completely contradicting the hypothesis that increases in atmospheric carbon dioxide are due to land emissions. 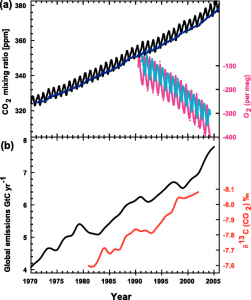 The carbon is coming from the burning of fossil fuels

The first way to test the hypothesis to measure the amount of oxygen in the air and see if it’s decreasing. If it is, then the decrease is likely due to combustion.

If you’ve ever done the candle in a jar experiment, then you know how combustion works. The experiment goes like this:

The reason the candle goes out is because the flame eventually uses up all the oxygen, and without oxygen combustion isn’t possible. If you measured the air in the jar before and after the candle had gone out, you’d find that it had almost no oxygen after the candle went out and there was a great deal of extra carbon dioxide.

The second way to test the combustion hypothesis is to count all the fossil fuels combusted in a year, convert those barrels of petroleum, tons of coal, and cubic feet of natural gas into carbon emitted into the air, and then compare that to the increase in carbon dioxide.

Scientists have done just this, and they’ve learned that fossil fuels add more carbon dioxide to the air every year than the increase that is measured. This means that the extra carbon dioxide has to be going somewhere, and there are only two places where it could be going – into the ocean and into plants. And if you recall, scientists have measured that the amount of carbon dioxide in the ocean is increasing globally, and that land plants are absorbing carbon too.

Putting it all together

Combined, these observations prove beyond any reasonable doubt that the increase in atmospheric carbon dioxide is due to fossil fuel combustion.

* Corals are used because they live so close to the ocean surface that the amount and isotopes of carbon in the water closely match what’s in the air.