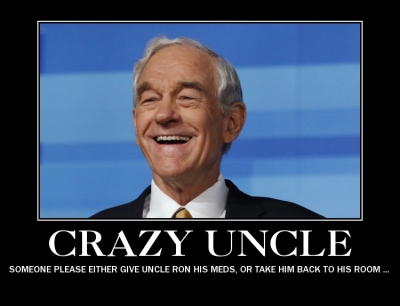 I’ve realized that politics is really about family relationships. We don’t vote on ideology or issues but on retyping the politician as a family member. Some people want a Big Father (Reagan), Dumbass Brother

The current race for the GOP presidential nomination has been dispiriting, the way our families often are.

We have ROMNEY, the Hardass Dad who made you mow the lawn every week and only paid you $2 an hour to teach you the value of hard work. Ramrod straight from rectum to top of his skull. Punched you hard in the shoulder, just like his dad did to him, and told you, “Get back to work, you bum, the lawn’s already growing back!” The kind of dad who could end an argument by saying, “You are FIRED from this conversation!”

GINGRICH, the obnoxious brother-in-law who knows everything about everything, is big on theory but not details. The History Channel nut. Always hanging around the snack table at a party, holding forth on something like the Napoleonic Wars or the invention of the Gatling gun with a mouth full of combos. Crumbs all over his shirt. Probably hitting on your wife while her sister (his wife) is in the other room.

SANTORUM is the weird second cousin who grew up in a fundamentalist cult of some kind and never doubted. Some Santorums become tax protesters or survivalists, others become ideologue-driven politicians. If you invite Santorum over to for Thanksgiving Dinner, for God’s sake, don’t let him give the prayer. You will regret it. And whatever you do, don’t ask him why he wears that sleeveless sweater. The answer will scar you.

RON PAUL, as the media has already dubbed him, is the crazy uncle. The Federal Reserve is the problem. The Rothchilds are the problem. A silver dime will buy a gallon gas. The banking monopolies control the money supply and drive the endless cycles of boom-and-bust, wars-and-reparations. The scary thing is that if your crazy uncle is only right about 1% of what he says, we’re all screwed.

That’s just the candidates still in the race.

RICK PERRY was the lazy frat brother who skated through college on his good looks and his D+ average. He likes to hunt but wears starched and ironed fatigues. He’s not a very good shot and is easily distracted. (“Hey, look, a baby armadillo!”) Maybe he doesn’t remember but he has already dropped out of the race.

HERMAN CAIN was the entrepreneurial granddad who is great at concepts, doesn’t mind breaking into song in public and really wanted a career as a soul singer. He is a bundle of energy who can con you into staking out CAIN 2012 signs in some crappy neighborhood at five in the morning. He too has dropped out of the race, but like family will never completely drop out of our lives.

And let’s not forget OBAMA, the smart older brother who’d rather read the law than practice it, rather read history than make it. He can summon the energy to perform when necessary, but seems to suffer from tired blood much of the time. He’s not any more narcissistic than his Republican counterparts, but he has an existential awareness of his narcissism that doesn’t sit well with him. He thinks, God, why didn’t I settle for a spot on the Supreme Court? Let Hillary have this shit–she actually likes it.