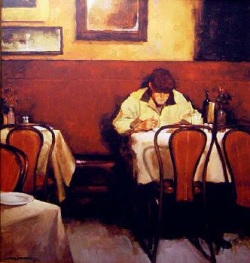 Hi. I just left your restaurant after waiting in line for maybe 45 minutes or so, and unfortunately I left extremely frustrated.

I’m a regular. I’ve probably been in ____’s an average of once a week since I moved to the Highlands last May. I bring friends there, and a couple of weeks ago I even scheduled a business lunch there with a potential colleague. Most of the time I’m alone, though, as I was this morning.

It was busy, as always for Sunday brunch, and I expected to wait. No problem – it’s worth it. I got my name on the list and kept my eye on the bar, which is where I’ll wind up, being a single. As my name neared the top of the list a booth opened up. The hostess calls my name and says she can seat me there now, but she asks if I’d be willing to wait for the counter since the couple on the end looks like they’re getting ready to leave. I’m starving, but the place is packed, and I wouldn’t feel right taking up a four-top in that situation, so I tell her sure, I’ll wait. I used to work in restaurants, so I get the challenge she faces, and she handled this the right way.

Maybe three minutes later the couple at the counter leaves and she … skips over me and gives the spots to another couple. Now I’m annoyed. I approach her and ask what just happened. She points to the list and says “they were on the list ahead of you.” Great. So – why did I give up a chance to be seated? I look at the bar and you have two couples who have just been seated and two more who have been camping and are nowhere close to leaving. Here’s the worst part – there seemed no recognition on her part as to what she’d just done, which felt a lot like a bait-and-switch to me. She didn’t even apologize.

I told her to take me off the list and I left. I tried not to make a scene of things – that would have served no purpose at all – but I’m sure I looked pretty unhappy.

Now, thinking about it, I don’t know if I’ll be back.

Look, I don’t expect every business in the world to kow-tow to me. I’ve had jackass customers myself and the truth is that some people are simply more trouble than they’re worth. So I do my best to be the kind of customer I used to want when I was waiting and bartending. Courteous. Understanding. Appreciative. Low-maintenance. Aware of how the place operates and what the employees are up against in trying to provide a pleasurable experience for their clientele. Etc.

And I also know that nobody is gearing their operation to accommodate the single customer. Had I come in with a date or a group of friends none of this would have happened. Two or three of us you’d have seated at a booth, a table or the counter. But the single guy (who is already, in this case, accustomed to feeling like a leper when he goes out to a restaurant) either has to sit at the counter or take up a lot of real estate while other groups wait (and stare at him disapprovingly for hogging an entire table while he tries to ignore the stares and enjoy his brunch).

What you do with this is up to you. But this morning it was made clear to a regular that he just isn’t as valued as other customers. I know that every restaurant owner in the world would respond by saying that isn’t true, we value all our customers, etc. But there’s a walk/talk problem with that. Say what you will, you showed me that I’m a second-class concern in your establishment. The businessman in me, aware of the 80/20 Rule (20% of the customers create 80% of the revenue), fully understands the fate of being one guy by himself. But that doesn’t mean that I should accept second-class treatment in return for first-class dollars.

I wish you the best, and as I’ve told more people than I can count, your food is tremendous (your green chile may be the best I have had in Denver). Just not sure I should come back anymore…..