Steve Milloy is still a fact fighter for hire 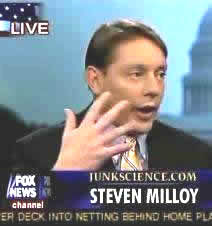 In an article titled “Syngenta’s Paid Third Party Pundits Spin the “News” on Atrazine,” the Center for Media and Democracy’s (CMD) PR Watch revealed that Steve Milloy, editor of JunkScience.com, had been hired to PR outreach through both his “National Center for Public Policy Research” and his “Free Enterprise Education Institute.” CMD acquired sealed court documents from a lawsuit against herbicide manufacturer Syngenta that show Milloy asking for a $15,000 grant in 2004 and invoicing Syngenta for $25,000 in 2008.

Another sequence of emails shows two Syngenta employees talking about how Milloy was going to do his “weekly column” on the book “Poisoned Profits” and getting Milloy some talking points:

From Sherry Duval Ford to Beth Carroll
Sent: August 6, 2008 2:03 PM [Ed note: the email on page 2 of the pdf shows clearly that this email follows the previous one]
Subject: RE: Poisoned Profits
“Thanks for the info. Does he need talking points on atrazine?”

From Sherry Ford to Steve Milloy
Sent: August 7, 2008 9:13 AM
Subject: RE: Atrazine talking points…
“Hi Steve–Thanks for your message. When do you need? I’ve been buried this morning but can get you something later this a.m.”

Milloy has a long and degenerate history of denying scientific facts in the service of anyone willing to pay his price that dates back to when he was paid by Philip Morris to deny the dangers of second hand smoke. More recently, Milloy has turned his jaundiced eye toward human-driven climate disruption, organic milk, and apparently, Syngenta’s herbicide atrazine. Beyond this, Milloy’s own public statements on climate disruption reveal him to be either incompetent or a liar-for-hire. Given how much money he commands in “grants” to his supposedly non-profit and/or tax-exempt foundations, I suspect that Milloy is actually quite competent.

Milloy represents a political underbelly that needs strongly enforced regulations and a great deal of sunlight. But he’s just one of the more visible tips of this particular iceberg. After all, CMD identified four other supposedly disinterested third parties that Syngenta paid to cast doubt upon the science that found atrazine was environmentally toxic. How many other people have been paid through foundations, think tanks, and PR companies to do the same?