The road to Hell is paved with good travel writing 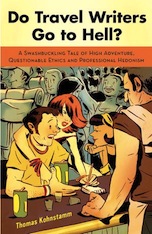 #26: Do Travel Writers Go To Hell?: A Swashbuckling Tale of High Adventures, Questionable Ethics, and Professional Hedonism by Thomas B. Kohnstamm (2008)

So when I stumbled across Kohnstamm’s book about being a travel writer in Brazil, I thought it would be a good chance to learn something about the country. The book looked interesting, too, because it implied a good ethics lesson: Do Travel Writers Go To Hell?

Well, I didn’t learn much about Brazil, and I didn’t get to ponder writerly ethics so much as a get a pretty explicit lesson on what not to do, but Kohnstamm kept me entertained with his Thompsonesque antics. This was “travel hedonism” at its gonzoest.

Paul Theroux once said that travel writing is really about the person who’s traveling. If applied literally to Do Travel Writers Go To Hell?, then this is a book about Hunter S. Thompson. Kohnstamm’s life seems to be an unending stream of sex, drugs, and rocky roads. In fact, he has a self-declared black-belt in long-distance bus travel, “hauling ass at double capacity on potholed highways full of oxcarts, rickshaws, and other buses laying head-on games of chicken in our lane; [peering] out the window at the burnt wreckage of other buses…in mountain valleys below….”

He doesn’t mention Thompson by name, although he does invoke Kerouac, Hemingway and Bruce Chatwin. “They were true writers coming to terms with the struggle of the people, the living history, the challenges of their generation—all while reflecting on the universal human condition with nothing but a journal, a drink, and pen in hand,” Kohnstamm says.

He starts the book trying to come to terms with his own existential crisis. He’s in his mid-twenties and restless. Is it him? Is it his generation? Is it Americans? “Escape is our action of choice,” he says: “escape through pharmaceuticals, escape through technology, and plain old running away in search of something else, anything else.”

He chooses escape of his own, ditching a cubicle-bound life at a Wall Street law firm to answer the siren song of the travel bug. The trip, right from the start, swells with the Thompsonesque quest of Fear and Loathing: the so-called search for the “American Dream.” “It could also be called the New American Dream,” Kohnstamm says. “Fuck the simple pursuit of financial stability. Here’s to finding fulfillment in novelty, excitement, adventure, and autonomy.”

Long story made short: He careens across eastern Brazil, city to city, town to town, hostel to hostel, restaurant to restaurant in a mad dash to cram in as much information as he can for a guidebook for Lonely Planet, eventually resorting to just making shit up because he can’t cover enough ground. His hijinks lead to hedonistic misadventure after misadventure, and in the end, he’s left with just over a week to try and produce a manuscript.

“I must be some kind of masochist,” he admits. “But in the end, I really loved all of it, every triumph and every setback—at least in retrospect. Experiences were had. Repertoires were expanded. Boundaries were pushed. Beverages were consumed. Ladies were bedded. And several hundred pages were written, all of which potentially affected some local economies and several thousand travelers’ itineraries.”

By that definition, chok-full-o good intentions as it is, then Kohnstamm is going to hell, indeed. After all those same good intentions make for great pavement. But damn if it wasn’t a gonzo trip.

If I want background on Brazil, I guess I should get his travel guide—or maybe not, knowing now just how much of it is made up of bullshit. “There is a huge gap between what is required of the author and what the author can realistically do with the alloted time and budget,” Kohnstamm writes. “Is this due to weak editorial direction, or willful ignorance on the part of the travel publishers, who choose to disregard how underpaid and overstretched the writers are in order to keep production costs down? I cannot say. A little of both, I guess.” Do Travel Writers Go to Hell? offers the behind-the-scenes results of that disconnect. It’s not a book about Brazil, it’s a book about writing a book about Brazil.

As a memoir, its veracity is also highly suspect, but Kohnstamm lays out the groundrules right up front. “In order to distill the chaos of life down to a clear narrative, it was necessary to omit certain events, rearrange and compress chronology, and combine a few of the characters,” he says in the author’s note. “I have changed most of the names and identifying details of the characters in this book to protect their privacy. Much of the dialogue and many e-mails have been recreated, but all are based on real conversations and correspondence.”

However, if I want to look at how writers write about place, Kohnstamm certainly provides a useful, entertaining lesson.

“The majority of travel books fall into three basic groups,” he says:

Kohnstamm’s falls into a category of its own. It’s a triumph of human…something. Perhaps the New American Dream, discovered by whirling like a dervish across the globe, living life to its top. Thompson, I suspect, would approve of the comparison.