Once more, I feel late to the party. I had no idea who Edward Abbey was, yet nearly every nonfiction writer I’ve read so far has referenced him. The only one who hasn’t was Thoreau, and that’s because Abbey hadn’t been born yet—and wouldn’t be for another sixty years after Thoreau’s death.

Abbey and Thoreau still share a connection, though: Novelist Larry McMurtry has apparently referred to Abbey as “the Thoreau of the American West.” Even the dead guy has a link to Abbey. Damn.

I stumbled on Abbey completely by accident. A blurb on his book Desert Solitaire described it as “an account of Abbey’s seasons as a ranger at Arches National Park.” Having just spent this past summer as a National Park ranger, and contemplating a similar writing project, I thought Abbey might be of use.

Published in 1968, Desert Solitaire recounts Abbey’s experiences as seasonal park ranger in 1956 and 1957. The Park Service gave him a trailer to live in, smack-dab in the wide-open desert of Utah. Abbey considered in paradise: “What better sinecure could a man with small needs, infinite desires, and philosophic pretensions ask for?”

Much of the book recounts his adventures—and misadventures—in the rugged landscape. “The desert is a land of surprises, some of them terrible surprises,” he concedes. “Terrible as derived from terror.”

Abbey proves himself up to the challenge of capturing the desert’s beauty and wonder. “And the desert—” Abbey later asks as he considers his surroundings, “what does the desert say? The desert says nothing. Completely passive, acted upon but never acting, the desert lies there like the bare skeleton of Being, spare, sparse, austere, utterly worthless, inviting not love but contemplation.”

Abbey takes full advantage of the opportunity. “Taking my meal outside by the burning juniper in the fireplace with more desert and mountains than I could explore in a lifetime open to view, I was invited to contemplate a far larger world, one which extends into a past and into a future without any limits known to the human kind,” he writes.

Things prove to be far from idyllic in the shadow of the Arches, though. “[T]here is a cloud on my horizon,” Abbey forecasts. “A small dark cloud bigger than my hand. Its name is progress.”

Even as Abbey revels in his job, the NPS is trying to open up Arches to wider audiences by making “improvements” to visitor services. Abbey finds himself at odds with his employer.

Lee’s Ferry has now fallen under the protection of the Park Service. And who can protect it against the Park Service? Powerlines now bisect the scene; a 100-foot pink water tower looms against the red cliffs; tract-style houses are built to house the “protectors”; natural campsites along the river are closed off while all campers are now herded into an artificial steel-and-asphalt “campground” in the hottest, windiest spot in the area; historic buildings are razed by bulldozers to save the expense of maintaining them while at the same time hundreds of thousands of dollars are spent on an unneeded paved entrance road. And the administrators complain of vandalism.

“Progress has come at last to the Arches, after a million years of neglect,” Abbey says. “Industrial Tourism has arrived.”

To this day, the Park Service wrestles with the twin engines that drive its mission: it’s supposed to preserve and protect our natural, cultural, and historical resources, but it’s also supposed to make those resources available for public enjoyment and education. I know from experience that it is a hard, hard mandate to balance.

Abbey will have none of it. He falls squarely on the side of “preservation and protection,” believing that wild places should be left wild for their own intrinsic value and not because they’re of “entertainment value” to the public. “We need wilderness whether or not we ever set foot in it,” he argues. “We need a refuge even though we may never need to go there.”

He has scorpion venom for interests that seek to exploit the wild—including oil companies, mining companies, and even the NPS. “There are some who frankly and boldly advocate the eradication of the last remnants of wilderness and the complete subjugation of nature the requirements of—not man—but industry,” Abbey says. “Original sin, the true original sin, is the bland destruction for the sake of greed of this natural paradise which lies all around us—if only we were worthy of it.”

Hell, Abbey even hates the fact that more people want to visit the park, which in itself would make the wilderness less wild.

Parks today place a huge emphasis on the economic impact they create for local communities. In an age when landowners and businesses speak in dollar signs, it’s sometimes the only way a park can make itself a priority. This is especially true in instances where development and preservation opportunities butt heads. Abbey, writing fifty years ago, experienced a different reality. He saw the tourism industry as a soul-sucker:

industrial tourism exacts a spiritual price from those dependent on it for their livelihood. The natives must learn to accustom themselves to the spectacle of hordes of wealthy, outlandishly dressed strangers invading their land and their homes. They must learn the automatic smile. They must expect to be gaped at and photographed. They must learn to be quaint, picturesque and photogenic. They must learn that courtesy and hospitality are not simply the customs of any decent society but are rather a special kind of commodity which can be peddled for money. 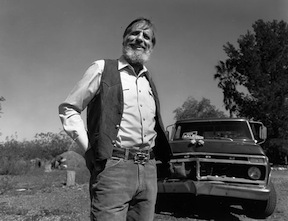 Throughout the book, Abbey comes across as someone who likes people but hates People. He’s paradoxically social with individuals but antisocial—and quite cynical—about groups. “I discovered that I was not opposed to mankind but only to man-centeredness, antropocentricity, the opinion that the world exists solely for the sake of man….” His realization, late in the book, was an important articulation for me.

Abbey’s uncompromising view made him a folk hero for the nascent environmentalist movement. It’s that influence that has sent Abbey rippling through the work of Terry Tempest Williams, David Gessner, Bernd Heinrich, John McPhee, and others. And now me.

“Thank God for Edward Abbey,” a friend wrote on my Facebook page when I mentioned that I’d finished the book.

Abbey’s story, considered one of the first modern works of creative nonfiction, has the definite tone of a curmudgeonly idealist. “The romantic view, while not the whole truth, is a necessary part of the whole truth,” he contends. After all, it’s the romanticized view of something that will best make people fall in love with it.

We have agreed not to drive our automobiles into cathedrals, concert halls, art museums, legislative assemblies, private bedrooms and other sanctums of our culture; we should treat our national larks with the same deference, for they, too, are holy places. An increasingly pagan and hedonistic people…we are learning finally that the forests and mountains and desert canyons are holier than our churches. Therefore, let us behave accordingly.

Abbey’s struggles reflect many of my own, not only as a park ranger but also as someone keenly concerned about the natural world and humankind’s (and my own) place in it. I’ll look for ways to follow Abbey’s example, finding opportunities for contemplation, for finding my story, for exercising my voice—and for enjoying the wonder of the world around me.