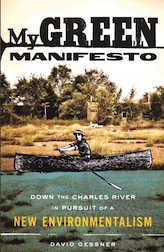 #2: My Green Manifesto: Down the Charles River in Pursuit of a New Environmentalism by David Gessner (2011)

David Gessner’s journey down Massachusetts’ Charles River may not be Marlowesque in its scope or scale, but it’s nonetheless a trip into his own heart. He undertakes his canoe trip as a way better understand his own connection to the natural world, which he hopes will help him clarify his own conflicting ideas about being environmentally conscious.

The result: My Green Manifesto: Down the Charles River in Pursuit of a New Environmentalism. He writes:

most issuers of manifestos begin with their conclusions concluded, their concrete hardened, and their intentions, motives, and views firmly in mind, or in hand, fit to bash you over the head with. I began, on the other hand, with nothing more than questions—questions as numerous as the sources of the Charles River, and as meandering as the river itself. But trust, dear reader, that though these questions do wander, they also reach the sea, moving toward answers if not the answer. 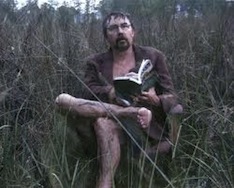 “What continues to bug me, when it comes right down to it, is the sheer earnestness of environmentalism, the conviction that the world is doomed and the compulsive need to share this cheery news,” he says. Such gloomy talk tends to have a single result. “Human beings, most of whom are really not very good at dwelling in hopelessness, turn away…. We are not very good at fighting apocalypses. We are better for fighting for our neighborhoods or for sections of river we’ve grown up on.”

Therein lies the seeds for Gessner’s new vision. “[B]eing environmental isn’t about education or politics. It’s about what Thoreau called ‘contact.’ Falling in love with something—a place, an animal—and then fighting for it,” he says. “I am interested in what makes someone, particularly a young someone, begin to fight for the environment.”

“Find something that you love that they’re fucking with and fight for it,” he says. “If everyone did that—imagine the difference.”

He holds up as his model Dan Driscoll, an urban planner for the Commonwealth of Massachusetts, who accompanies Gessner on much of the trip. “There is something of the true believer to Dan, as there has to be in anyone who will take on the sort of fight he has,” Gessner says; “but that intensity is leavened by a certain regular guy-ness and sense of humor.”

Driscoll has almost single-handedly built a coalition that helped rehabilitate major sections of the Charles since 1990. “Let’s have these green paths that run through urban areas,” Driscoll explains. “Let’s re-plant native plants to bring animals back. Let’s reconnect people to nature.”

Driscoll fights blight and bureaucracy in his rehabilitation efforts. Gessner’s canoe trip down the Charles becomes a literal show-and-tell of Driscoll’s successes. Gessner also uses it to illustrate the failures of the environmental movement. “Actually getting something done in the world always trumps theory,” Gessner says, eager to share the story of Driscoll’s work. “We don’t need more theory, disembodied from the world. We need stories, told outside, told in a way that links activism to beauty, wild beauty.”

The environmental movement Gessner rails against becomes embodied in the book Break Through by Ted Nordhaus and Michael Shellenberger. He has a running conversation with the book, which serves as a foil for his own ideas in Green Manifesto. He finds, by the end of his trip, that he has more in common with Nordhaus and Shellenberger than he originally wanted to admit, but Gessner still believes in a practicality that the other authors don’t seem to demonstrate. They talk the talk but Gessner, telling success stories, seems to be walking the walk (or paddling the canoe and writing about it, as the case may be). They are Emerson; Gessner is Thoreau.

Gessner comes back to Thoreau time and again along the journey. He does so because—“other than his great sentences”—the allegory of Thoreau’s life “provides the template for almost all who either write about, fight for, or simply love being in nature.”

He looks at the legacy of other great environmental storytellers, too:

Rachel Carson: “who, by retreating to the Maine coast to closely observe her tidal pools and eel grass, gave us a book that led to some of the most significant environmental changes of the last century. Carson reminds us again of the necessity of retreat…that, by continuing to return to our most private places, we can deeply engage the world.”

Edward Abbey: “until you figured him out, if you ever did, surprise was on his side: What would this hairy, bearded, cigar-smoking, beer-swilling barbarian do next?”

Wendell Berry: “one of the most influential environmental thinkers of our time” who writes about “the need to return for caring for our local places; the need, in fact, to marry those laces instead of having strip-mining flings with them.”

Berry’s notions of localization or, at the least, regionalization, resonate strongly with Gessner. Maybe environmental apocalypse is too big for anyone to do anything about, but rehabilitating a stretch of river through your hometown, or establishing a green space, or starting a recycling program or a farmer’s market—those are all things people can do to make a difference in their own little patch of the environment.

“Don’t forget hope,” Gessner says. “Of course there is every reason to be hopeless but what fun is that?”

For more on My Green Manifesto, check out Gessner’s book trailer: