Design Fail at the London Olympics

Well, whoever it is who gave us this as our logo, and these guys as our mascots, is still around, because the new batch of official London 2012 Olympics posters was released a little while ago, and they’re pretty dreadful. Uninspired is probably a better word, since they’re among the most boring posters you will ever see. It clearly follows from the fact that whatever committee this was decided to go for name artists, rather than run some sort of competition. So we’ve got the gaggle of usual suspects. Here’s probably the best of the bunch, from Adrian Hamilton: 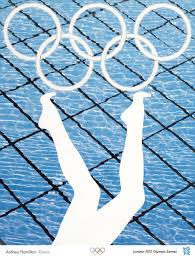 And here’s the lot.

Honestly, this is getting embarrassing. What sort of posters would they have gotten if they’d avoided hiring their buddies and actually opened it up to a competition? How about these? Or, even better, these? A sample of which is here:

Any of which would have been an improvement.