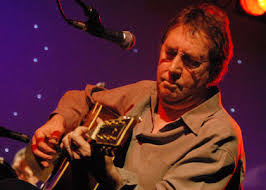 Bert Jansch, guitarist extraordinaire, died two days ago, the same day as Steve Jobs. While both changed my life in positive ways, I’d have to say that Jansch’s influence was better. And I say that even as I sit here tappping away on my MacBook, charging up my iPod. Jobs gave me more interesting tools to live my life. Jansch gave it a bit more meaning than it would otherwise have had.

Jansch was in the forefront of the great British folk revival of the 1960s. This has been admirably described in Colin Harper’s excellent biography of Jansch, Dazzling Stranger. This was the same time the Beatles were rewriting musical history–or writing new history–and Jansch was first among equals of a whole slew of great singer-songwriters, many of whom are still whinnying among us, some of whom, like Jansch, have departed. This was an incredibly interesting time, when everyone was not only rediscovering bits and pieces of the British musical heriage–of which there is a lot–but the place was full of Americans like Paul Simon stealing everything in sight. And the songwriting! Jansch, Sandy Denny, Robin Williamson and Mike Heron of The Incredible String Band, Richard Thompson, Nick Drake… Jansch hooked up with John Renbourn, another great, great guitarist of the time who is still going strong, and formed Pentangle, around the time Thompson and Simon Nicol were forming Fairport Convention. Meanwhile, the older folkies like Ewan MacColl were simultaneously fascinated and appalled at what was happening to their music. What a time. What great music! And Jansch has been a constant presence in the British folk consciousness ever since, touring regularly, teaching, being modest about his accomplishments, and singing with that husky voice, and playing with those incredible fingers. He was probably stolen from more than any other guitarist of the last fifty years. He made a whole raft of records, many of them uneven–his voice didn’t always match his song selection. But this output over he decades has been consistently stimulating, and I often find Toy Balloon or Carnival or The January Man or When I Get Home popping into my head at the oddest times.

Jansch kept touring up until earlier this year. We saw him quite a few times, most recently three years ago when the original Pentangle regrouped. We went up to Oxford to see them, and it was worth the trip. They had a another reunion tour this year. There won’t be more, I suspect, although if there’s a memorial concert, I’m there.

The Guardian has a collection of tributes, the usual excellent obituary, and a nice appreciation from Peter Paphides.

But the best bet, if you haven’t already done so, is to listen to the music. There are a couple of compilations, the best of which is called, appropriately enough, Dazzling Stranger. The guitar albums he did with Renbourn are still striking displays of technique. Or pick up Toy Balloon, a later album, or the fairly early Moonshine, or a couple of old Pentangle albums (Sweet Child especially), lean back with a glass of Laphroaig, neat, and enjoy. He will leave a mark on you.