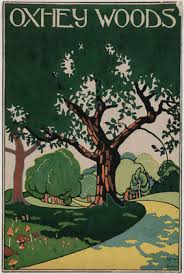 The wonderful little Estorick Collection, which was established to display modern Italian art, and normally does just that, has a wonderful show designed to present the poster art of Edward McKnight Kauffer. Kauffer revolutionized poster design in Britain after WWI, and was one of Britain’s most important artists during the 1920s and 1930s, before his forced departure back to America following the entry of Britain into the European War in 1939. Kauffer was an American who went to Paris to study art (funded by a philanthropist named McKnight, whose name Kauffer adopted in acknowledgement), and, as an American, could find no work in Britain after the war began, and had to return to the US, which he bitterly regretted doing. This would have been before dual citizenship was possible, of course, and Kauffer had not undertaken UK citizenship.

Anyway, the art. Why should we care? And why now? Well, there has been something of a Kauffer revival going on over the past decade, and visiting the Estorick exhibit tells us why. Kauffer was a brilliant artist, and probably suffers from the fact that his ouvre–advertising posters and billboards–is, well, commercial art. Well, so it was. But it’s still, you know, art. His friends, who included TS Eliot and most of the visual artists of the period, certainly thought so. Kauffer believed in the power of good, strong art, which is what he produced. And the show at the Estorick does an excellent job of conveying this.

His earliest posters, like the Oxhey woods one above, show him still under the influence of Latrec (his model), Cezanne, Derain, and the Japanese artists and print-makers whose work transformed European art in the late 19th century. The poster for Godstone, below, conveys this even more strongly:

This has Japonsime written all over it–the bold sky, the small details at the bottom (in this case, trains) where human activity occurs. in a similar vein is his poster for Surrey, below:

Again, it’s the large Cezanney blocks of color that stand out, and the contrasting colours that grab out attention–and then the little details of human activity. These were both produced in the 1920s for either the London Underground or for some of the UK train companies, for whom Kauffer did sterling work. It was the Underground that gave him his start, in fact. Over his career in London, Kauffer produced something like 170 posters, and the majority were for the Underground or the train companies (of which there were many).

Kauffer also did a lot of work for Shell in the 1930s, and it’s some of his strongest, showing some of the impact of some of his travels in Germany. Some of his images became much more industrial–both Germany and Italy had been through periods of Futurist art, which thought that industrial art was the way to go. Kauffer, who had earlier in his career allied himself with Wyndham Lewis and the Vorticists, weren’t convinced. In fact, Lewis (along with Pound and some others) founded Vorticism in direct response to the Futurusts and their mechanized visions of an artistic future. And although Kauffer drifted away from the Vorticists, a strong natural feeling for nature pervades most of his work. His most vorticist work is probably his legendary set of birds, initially used in an advertizing campaign by The Daily Herald: 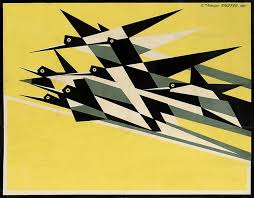 And some of his 1930s posters for Shell show some of the same industrial cubism:

But much of his work was eclectic, and he would take images from anywhere, and still produce something recognizably Kaufferistic. His Stonehenge poster conveys this wonderfully, with its willowy lines, not a straight line anywhere–it’s very reminiscent of what Grant Wood and Wanda Gag were also doing with prints and paintings at around the same time in the US: 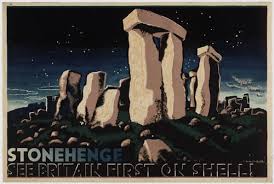 When Kauffer returned to the US, his art changed somewhat–it got less dynamic, for any number of reasons, the main one being that his natural subject–the advertising poster–was a completely different animal in the US than it had been in Britain. He still found work, of course, but not anything that had anything like the impact his work in Britain had enjoyed in the 1920s and 1930s. He had an established career as an illustrator and book cover designer as well, and these paid the bills more often than not. But it’s the posters that continue to startle and delight.

It’s a great little show–just two large rooms of posters–and it manages to convey the strength and joy of Kauffer’s art very well. And there are a series of lectures on Saturday afternoons, the first of which was yesterday, and it was great fun. We’ll just close with a little something for Eno’s Fruit Salt, which, sadly, is not in the show: 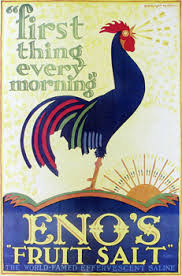 And the Museum of Natural History, which is:

The exhibit runs through 18 December, and has a handsomely produced booklet with all the posters in the show. Enjoy!