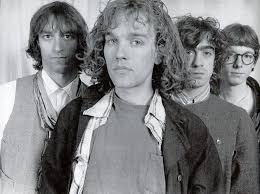 You’ve probably heard by now: REM, one of the progenitors of alt.rock has called it quits after 30 years and 15 albums.

The first five REM records (Murmur, Reckoning, Fables of the Reconstruction, Life’s Rich Pageant and Document) deserve at least 18 stars out of a possible 20 and 1992’s Automatic for the People earned five more. By any standard, they depart the stage as one of the greatest bands in rock history, and there’s probably a very good argument to be made that they’re the greatest American band ever. That would no doubt be a lively debate, of course (and one where the band wouldn’t be terribly well-served by the last 15 years or so of its history). Still, their music was groundbreaking and relentlessly original, and along with fellow mid-’80s college radio darlings U2 and INXS they forged the alt.rock landscape in ways that paved the way for thousands of artists who would follow.

A couple of quick memories. I first saw the band live on the Fables tour on December 21, 1985. Winter Solstice, as it turns out. I had recently started working at Z-93 in Winston-Salem and they were playing Reynolds Auditorium on the campus of RJ Reynolds High School. The aud seats just under 1,900, and is one of those venues that can seem quite large, open and spacious. But at that point in their careers REM could have made Wembley Stadium feel like a small club.

They opened with the album’s lead track, “Feeling Gravity’s Pull,” and could hardly have done a better job establishing a tone. The stage and lighting, like the album they were touring behind, was dark and murky, providing a perfect context for the band’s sound, a soup of neo-Byrdsian jangle, monochromatic Southern gothic atmosphere and Michael Stipe’s trademark vocal obscurity. I still have no idea what the hell Stipe was saying, but at one point he wandered around behind the backdrop during a song, and I remember marveling that a performer could be so compelling, so commanding while mumbling incoherently from behind the damned stage. It was one of the best shows I have ever seen and I’m grateful to the people I worked with at Z-93 (most notably Program Director Gray Smith) for giving me the opportunity.

Side note: The opening band that night was The Minutemen, and they remain the worst concert experience of my life. I know they have their fans, but I found them godawful in every way. The following night, after the show in Charlotte, lead singer D. Boon was killed in a car wreck.

I saw the band again in the winter of 1989 when the Green tour stopped in Iowa City. I was in the final semester of my MA program at Iowa State and one of the profs, whose name I can’t recall, and I drove over for the show. I remember three things about that night.

First, REM knew they weren’t an arena band, but found themselves very famous and playing arenas nonetheless. So their whole approach to the show was a spoof of arena rock. Stipe greeted the audience as text was projected on the screen behind him. It read something like this:

Stipe played it to the hilt. He didn’t say “We’re glad to be in Iowa City,” he said “We’re glad to be in your city here.” Very funny, and very important in the way it reached out to the band’s established fans, saying yeah, we know most people are here because of “Orange Crush” and “Pop Song 89,” but we’re still your band. We’re all in on the joke here.

Second, Stipe’s voice was in trouble early on in the show and it got worse throughout. But he never pulled back. Instead, he attacked every song as though it was the last he’d ever get to sing. If there was a show the next night, he didn’t care. They closed the final encore with “So. Central Rain” (my favorite REM song, by the way) and I’ll always recall his voice, shredded and broken by then, screaming “I’m Sorry” over and over. On the whole, this show couldn’t hold a candle to the Reynolds Auditorium show, but at the end it was clear how ultimately committed the band remained to their music and their fans. I still get chills thinking about it.

Finally, I remember the conversation with the prof. I was in the final stages of my thesis, a book of poetry called The Rainwater Chronicles. He had read it, liked it, and began talking about how I had dedicated so much energy to a underlying theme of death. Where did my preoccupation with death come from, he wondered. I was baffled. The book had nothing at all to do with death, and I told him so. But, he said, and then he started rattling off examples. There were a lot of them, as it turned out. I was stunned. There was no arguing the fact – death permeated the book: my grandfather, several friends from childhood and high school, the imminent death of my grandmother, even preconceptions of my own death. How had I possibly not realized what I was doing.

These are the things I will always remember about REM. Like their music when they were at their best, my  memories are personal, intimate, even obscure. But they endure, as will the band’s legacy.

Michael, Peter, Mike and Bill – thanks. And best of luck in whatever you do from here on out.