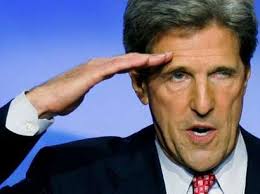 Sen. John Kerry’s decision to not meet with “a whole bunch of lobbyists right now” and not fundraise while serving on Congress’ deficit-reduction “supercommittee” fails to impress. And the story by his hometown cheerleader, The Boston Globe,” equally fails to impress.

The Massachusetts Democrat may have scored a few points with voters. But his decision is really only inexpensive grandstanding. He said in August he’ll seek a sixth term in 2014. And he’s a shoo-in to win. He won his fifth term in 2008 with 66 percent of the vote and faced a primary opponent for only the first time in decades.

And who would want to face a sitting senator who has, thanks to his leadership PAC and campaign committee, $3 million in the bank and zero debt? And whose personal wealth, tops in the U.S. Senate, hit nearly $190 million entering 2010?

So Kerry enacts his no-lobbyist rule:

I’m not meeting with a lot of lobbyists; I’m meeting with people I choose to meet with, who can inform me, assist in the process of crunching numbers and dealing with consequences, and so forth.

Kerry doesn’t need to deal with lobbyists or fundraise to be re-elected. So his pledge is specious. This is not a harsh criticism of Kerry; it’s merely political reality. And it’s the context The Globe left out of its online story. It would have taken only five minutes and a few quick Web searches to do.