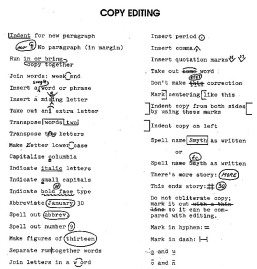 In 1976, I was a general-assignment reporter of limited experience and minimal accomplishment. So my editor kindly fired me, then said: “Now get your ass up on the copy desk where you belong.”

I knew little about copy editing. So I asked my newsroom godfather: “Neil, what do copy editors do?”

He looked over the rims of those 1950s spectacles he favored and said, “Defend your reader.”

“Against what?” I asked.

The memory of, or, perhaps, even the desire to exercise that dictum may remain in today’s newsrooms. But the ability of copy editors today to defend readers against error has inexorably been eroded. That decimation of editing capacity has been fueled by computerization beginning in the late ’70s and continued in this past decade by the sacking of newsroom staffs and the insatiable demand of management to get stories online or winging to mobile devices right now.

I read The New York Times, The Washington Post, and The Boston Globe on my BlackBerry in the evening. Occasionally, I’ll look at The Times‘ website in my office during the day.

I see errors each day. This post, however, is not about the big errors — such as “there are, irrefutably, WMDs in Iraq” — but rather the small.

Each night I see errors in language use — and more than I used to find in years past in print. A comma splice. Spelling errors, usually homonyms run amok. A serial comma error. An appositive or non-essential phrase or clause missing the back-end comma. A run-on sentence (mostly in The Post). Lengthy sentences easily cracked in half or thirds. Unnecessary passive constructions. A typo in a headline that lingers for a day. I see similar errors at online news sites, but not as many as I see on my BlackBerry.

A newsroom’s tolerance for small errors provides fertile ground for overt or covert misrepresentation of events, context and background. As Charles Seife wrote in his book “Proofiness,” “Error obscures reality.”

These errors are no surprise, given the recent revenue history of newspapers. They have cast off older, more experienced reporters and editors. Younger, less expensive, less experienced staffs remain. A desire to drive down costs has thinned the wall between reader and error. Then there’s speed kills: Online and mobile journalism can be likened to the mortal combat between the AP and UPI of generations ago to be first on the wire. If speed is the premium, error and inaccuracies are the costs.

Admittedly, newspapers need to shed costs. And it must be frustrating for them to spend what they do on reporting, writing, editing — all those infrastructure costs — only to have news aggregation sites with no overhead costs rip off their work and profit from it.

Earlier this year, Alan Mutter reflected on the costs of copy editing at his Newsosaur site. He articulated those costs in detail and compared them to that of aggregators. The imbalance is remarkable, an imbalance attended by consequences. Writes Mutter:

With the fat (if ever there were) long since trimmed from most newsrooms, the choice for many metros now may be coming down to whether to rein in news coverage or relax their traditional standards by editing out some of the editors. In some ways, this already has begun.

While it would be heretical at most major news organizations to “railroad” stories from a reporter’s keyboard directly into print, several publications, including a few surprisingly large ones, are allowing reporters to point, click and post words and images directly to the newspaper’s website. If the work is good enough to slap on the web without further human intervention, why isn’t it good enough to go directly on a web press?

On the other hand, a compelling case can be made that newspapers would debase themselves journalistically, commercially and, perhaps, even fatally by abandoning the disciplined reporting and professional editing that makes their content uniquely valuable in an age of frequently impulsive, often repulsive and usually unverified Twittering. [emphasis added]

There’s general agreement, methinks, that mobile and Web work suffers more from editing lapses than print work. That may be because of changes in traditional newsroom routines. As Brian Cubbison wrote nearly four years ago before the massive move to mobile:

In some newsrooms, there might be six people between the reporter and the reader. That’s just in the editorial process. When a reporter posts directly to a blog, there are zero. … A reporter who posts directly to a blog is taking care of layout, paginating and even the headline writing. Form is supposed to follow function, but each of those tasks has been determined by the technology of putting ink on paper. As the technology changed, some tasks moved from composing rooms to copy desks. Now they’re moving again. Copy editors need to ask themselves: Where do they really need to be, and where do they add the most value?

“Throw it up on the Web” is a phrase commonly heard in newsrooms. “Throw it up” implies imprecision. Perhaps that’s why Cubbison titled his post “Web first, edit later.”

I know editors who have told me, bluntly, that they don’t mind reporter-direct-to-mobile-or-online because errors in those media can be fixed easily. But, as many in Mutter’s comment thread noted, fixing an error on a news organization’s website or mobile stream is no guarantee that all iterations of that story veining through the Web via aggregation will be fixed as well.

Further, that fix-it-later attitude about mobile and online news privileges the ability to correct error over the public-service mission of getting it right the first time.

Revenue considerations in news organizations surely complicate addressing the issue of preventing error in online and mobile news. But, frankly, if the word “news” exists in front of “corporation,” an obligation to defend your reader remains.

Keep in mind your readers’ wishes:

Show us something we don’t know.
Explain why we want to know it.
Let us see it. Show it to us.
Get it right. Don’t shortchange us.
Never, ever forget us.