One of the hypotheses proposed by climate disruption deniers for Venus’ hot surface temperature is that Venus has an unusually hot core. The logic goes like this – if the core is hot enough, then the surface temperature would be from heat bleeding through the crust instead of from the greenhouse effect of a 97% carbon dioxide (CO2) atmosphere. This hypothesis can be quickly disproved by running three simple calculations.

Scientists estimate that Venus’ solid crust is about 50 km thick, and data from robotic probes indicates that it’s of similar composition to the Earth’s crust. The Earth’s crust is largely silicates, and so I’ve simplified the following calculations by assuming that the entire surface of Venus is composed of silica (silicon dioxide, SiO2, aka quartz), which makes up about 60% of the Earth’s crust. The physical property that we care about at the moment is thermal conductivity, or how easily a material conducts heat through it. Silica’s thermal conductivity is 1.38 W·m-1·K-1 (source).

Yesterday I calculated how much power the surface of a black body Venus has to radiate in order for the surface temperature to be at the observed 735 K: 1.655 W·m-2 x 104. Therefore, this much power has to pass through every square meter of the crust. Furthermore, that much power must also pass through the entire 50 km thick block of the crust, and that 50 km thick block of crust resists the flow of heat according to its thermal resistance. Thermal resistance is calculated as follows

We know the power

through this block of crust, so we know that the temperature of Venus’ core (really the mantle, but it won’t really matter) is 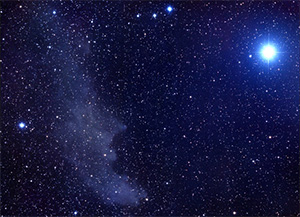 This gives us a core temperature of Venus of about 600 million K. For comparison, the core of the Sun is estimated to be only about 14 million K. And given that Venus is not a measurable source of X-rays or gamma radiation (the types of electromagnetic radiation generated by extremely high temperatures), we can safely rule out the possibility that Venus houses a star burning 40+ times hotter than the sun (a blue supergiant maybe?) within the planet’s crust.

Maybe the data on Venus’ composition and estimates of the crust’s thickness are wrong. In order to be thorough, we should rule out both of those possibilities as well, starting with the thickness of Venus’ crust.

Solving Equation 3.3 for l, we get

where lcrust is the thickness of Venus’ crust and TVcore is estimated to be roughly equal to that of the Earth’s core, or between 4000 and 7000 K (Source). For simplicity’s sake I’ll assume the higher value and ignore the fact that the Earth’s mantle is quite a bit cooler than the core. From Eqn 3.4, we get that the crust would be a grand total of 0.49 meters thick. Yes, you read that right – approximately a half-meter (18.5 inches) thick. Using the lower temperature of 4000 degrees produces a crust thickness that’s still less than a meter.

Radar mapping of Venus’ topology doesn’t support this conclusion. Radar altimetry has detected volcanic mountains, impact craters, and other features that simply would not exist if the crust was only 0.5 m thick. In addition, a crust this thin would support massive amounts of active volcanism (in fact, one could argue that the entire surface would essentially qualify as a lava lake) and show tidal deformation due to the effects of the Sun’s gravity. The presence of volcanoes has been verified on Venus’ surface, but actual eruptions have not been observed, never mind confirmed. Similarly, Venus is too round to have the kinds of tidal variations that would occur with such a thin crust.

So Venus isn’t harboring a star in its core and its crust is thicker than 0.5 meters. But maybe the crust isn’t mostly silica. We can solve Equation 3.3 for ρ instead and calculate what the thermal resistance (conductivity) of the crust would have to be for a 50 km thick crust and a reasonable core temperature.

From Equation 3.5, we calculate that the thermal conductivity of Venus’ crust would have to be about 139,000 W/m·K. Only one thing comes close to having a thermal conductivity this high – heated diamond. It would be difficult for a probe analyzing the composition of the crust to mistake silica rock for diamond.