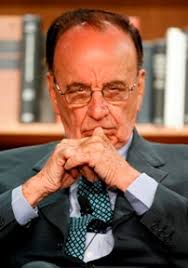 Rupert Murdoch probably thought that, at 80, he could ride off into the sunset and leave News Corporation in good hands—those of his trusty assistant, Robert Thompson, and his son James, who is being moved to the US from the UK to become the firm’s number three. Murdoch has built one of the most remarkable media empires around through a combination of brashness and acumen rarely encountered in the past couple of decades. (Unfortunately, he’s also created Fox News, a true force for evil and that bane of American politics, but that’s another discussion.)

But things are not going so smoothly here in the UK, and it may have ramifications for how the organization develops going forward, and indeed whether it will survive in its current form. Because the long-simmering scandal over phone-tapping by reporters for one of the Murdoch stable of newspapers here, News of the World, now looks set to explode, and it’s not clear the damage can be contained.

The background is this. Back in 2006, police were asked to investigate mobile phone hacking of some members of the Royal Family. There was an investigation, which culminated in the royal reporter for NOTW, Clive Goodman, being carted off to prison, along with private investigator Glenn Mulcaire. NOTW has since, up until very recently, maintained the posture that this was the effort of a lone rogue reporter, did not have the sanction of anyone in the organization, and should be treated as such. And the police have, up until recently, taken a similar line, indicating that everyone who was targeted by NOTW had been alerted, and really, this was all making a mountain out of a molehill.

But the story kept getting more complicated. The Guardian kept investigating, and eventually determined that it was more like several thousand people whose voicemails had been hacked, and that there were likely more NOTW staff involved as well. And it turns out that a number of people indeed were targeted—certainly in the hundreds. We don’t actually know how many yet. And many of them were Labour politicians, and many of them were just celebrities.

Why they were targeted seems pretty obvious—if you can hack someone’s voicemail messages, especially in a culture where people are leaving messages all the time, you can pick up something good for a story—or even better, for leverage for a story in the future. So Parliament hauled some people in, and they testified, and denied everything. Or, if they were John Yates, who headed the police inquiry, they said everything had been done that could be done. Or, if they were Rebekah Brooks, former editor of NOTW and The Sun before becoming head of Chief Executive of News International in the UK, and who is very close to Rupert Murdoch, they just ignored the Parliamentary invitation in the first place. Given how events are unfolding, she may not be able to ignore another one.

More recently, this past week police arrested two more people, one an editor at NOTW. There’s also in an interest in a second private investigator, recently acquitted of murder (don’t ask—apparently unconnected, but at this point who knows?) The police have decided—after being thoroughly embarrassed by the half-ass job they did in the first place, and by the fact that it turned out they had received hundreds of inquiries from people who thought their phones had been hacked—to re-open the investigation a bit more aggressively than the last run-through. Police also raided NOTW’s offices, although it’s not yet clear what they may or may not have found.

Then there were all the other, added, dimensions to the story, which meant it not only had legs, it had implications. For one thing, the editor of NOTW at the time, Andrew Coulson, who resigned following the initial scandal, was hired by incoming Prime Minister David Cameron as his principal media advisor. He has since resigned that position too, although for reasons of not embarrassing the government, allegedly, and this may be true. This is a tricky one, because it isn’t clear at this point whether Coulson actually did know what was going on. Moreover, it appears that Labour at the time wasn’t enthusiastic about pushing this either, although it was revealed recently that Gordon Brown wanted an investigation prior to the election, but was over-ruled by the Cabinet Secretary over concerns that it would appear “political.” For another, David Cameron himself is friends with Rebekah Brooks, former editor of both NOTW and The Sun, and currently head of News International’s operations in the UK. Then, just to add a wrinkle of confusion to the whole tapestry, there’s the real possibility that the police may have underplayed, if not bugled outright, the original investigation. There’s enough high dudgeon going around to fill a book, and there will certainly be one at some point.

Then there’s News Corporation’s attempt to buy up the stock of phenomenally successful satellite broadcaster BSkyB so it could fully consolidate its very strong financial results, and not have to wait until BSkyB’s share price became prohibitively high. This decision by Culture Secretary Jeremy Hunt has proved extremely controversial, and it may be more difficult to justify going forward, although Hunt has said he will give a final decision when Parliament returns on 26 April. Because of the weirdness of the laws governing media combinations, it’s not clear whether any of this potentially criminal activity can be a rationale for blocking the transaction. Get this (also from the above-linked article in The Guardian):

But advisers to the culture secretary, Jeremy Hunt, say he is prevented by law from taking the scandal into account when he considers whether it is appropriate for News Corporation to be allowed to buy all of BSkyB. The £8bn merger, which the minister has already said he is minded to approve, is being examined on its impact on “media plurality.” However, Hunt’s lawyers say that phone hacking cannot be considered in an inquiry as regards plurality. They say it could only form part of a “suitability of persons” test into whether Murdoch and the bosses of News Corporation were appropriate individuals to own BSkyB. That test was designed to prevent pornographers, for example, becoming media owners – but it cannot now be invoked in the case of the Murdoch merger. The Enterprise Act that covers the UK’s merger rules only allows one referral on one set of grounds, which means £8bn deal could only ever have been referred for political approval on either media plurality or suitability of persons grounds, but not both.

Confused? So is everyone here. Mayor Boris Johnson, who probably wouldn’t mind if Cameron’s star was a bit tarnished from all of this, has called for a newspaper Truth and Reconciliation Commission, which seems to degrade the notion a bit, but I think I know what he has in mind. Because it’s clear that one of the reasons the police didn’t pursue this as aggressively as they might have earlier on was because of the cozy relationship that was built up between the police and the Murdoch newspapers.

Recently there have been some further developments. Since there’s a whole celebrity circus surrounding this, as some many celebrities were apparently targets (or victims, if you will), some have had the bright idea of doing a little digging on their own. So we have the delectable spectacle of Hugh Grant, of all people, doing a nice turn as a reporter and actually learning something interesting, something that could prove problematic for Rebekah Brooks if it’s true. Possibly David Cameron, too. Of course this has once again become front page news every day, and it’s great sport for media freaks. Scary, too, though. How many of us want reporters—or anyone?—rooting around in the voicemails on our mobile phones?

So this past Friday News International attempted a bit of closure, fessing up that there was indeed cause for concern, since, yes, there was more than one reporter involved in this “unprofessional” practice, and offering compensation to a number of the victims of the phone hackery. Eight, apparently. This can probably be interpreted as a recognition by News International that they have not been able to contain the problem, even though Rupert Murdoch himself said last year that there was nothing there. So Rupert himself is looking a bit dodgy here, although I will say in his defence—probably the only time in my life I will defend Murdoch—that he may very well have been misled. The question now is by whom. It it’s Brooks, whom NOTW and News International have thus far been fairly successful at protecting, then she’s out, friendship with Cameron or no friendship. But it’s still unfolding, so she may be safe.

Where does this leave everything? A bit unsettled, which is certainly not where Rupert Murdoch, who probably thought whether he had an Internet strategy was his biggest problem, wants things. Or James Murdoch, for that matter. The House of Lords, which needs to approve the sale of the remaining shares of BSkyB to NewsCorp, has at least two members—including Lord Prescott, former Labour Deputy Prime Minister, and Lord Oakshott, who was the person who blew the whistle on Tony Blair’s Cash for Honors scandal, and therefore should not be messed with—willing to say at this point that perhaps there should be no rush for approval pending the results of determining who actually knew what when. Then there are the calls in the House of Commons for a complete vetting of the somewhat sorry police investigation back then, and where things stand now. It already appears that some of what the chief investigator told Commons in his previous testimony may not be completely accurate. And what happens with the current News International offer to settle with some, but not others, of the potential litigants will bear watching.

At the moment, there’s no indication that any of them are prepared to end their litigation and take the offer, which News International would dearly love to see happen, since it would apparently establish a limit for damages for future claimants. James Murdoch, in an interview after the announcement, said of the offer that “It shows what we were able to do is really put this problem into a box.” Well, maybe not quite yet. Murdoch, who was off running BSkyB when all of this was taking place at NOTW, may well be the only figure in the clear of any involvement in this. But that’s probably of little comfort at the moment. And Rupert’s thoughts of easing off into the sunset, if he had any? Probably on hold for now. This story still has legs, as they say in the news business.