Do Svidaniya, Yuri and Vladimir 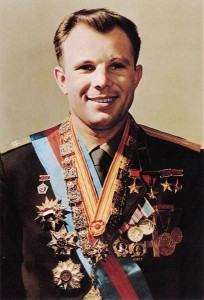 If you’re a Boomer, particularly a Boomer male, the “space race” resonates with you as much, maybe more than JFK,  Beatlemania, or Vietnam. You spent a lot of Saturdays wishing the most recent Mercury/Gemini/Apollo mission would release its hold and that all systems would be go so the spectacle of the launch itself could flicker on your TV – and you could get back to watching cartoons.

But the astronauts themselves were rock stars – before there were rock stars. They were real, live American heroes – and while I and many of my generation found ourselves torn between widely varying (although not so different, we now know) heroic types, no one doubted the courage – sometimes tragically expressed – of our space explorers. We lost  some of our guys (including my personal favorite, Gus Grissom) – but we had to beat the Russians. If they took over space, life as we knew it would be over. Over….

And they had the first space hero – Yuri Gagarin.

Now, NPR blogger Robert Krulwich offers a fascinating look into the madness that drove the Russians in their competition to conquer space ahead of us – and of the high price some Russian heroes paid. Krulwich relates this tragedy from the new book Starman: The Untold Story of Yuri Gagarin which recounts the story of Vladimir Komarov, a Russian astronaut assigned to fly a mission doomed to failure – and of his friend, the aforementioned hero of the Soviet space program Gagarin, who tried to save him – and perhaps paid with his own life for the anger he felt and expressed to Leonid Brezhnev after his friend was needlessly sacrificed for “Realpolitik.”

Perhaps most painful to read is the description of Komarov’s final moments – his own recounting of the failure of system after system in his shoddily constructed space craft – and his railing against the Soviet engineers, space program, and government that sent him to his death.

While Krulwich doesn’t draw a line between the dots, once you read about what Gagarin did to Soviet leader Brezhnev when he met with him to discuss Komarov’s death, you’ll wonder yourself if Gagarin’s subsequent death in a plane crash was the tragic accident the Soviet media reported – or more Realpolitik.

Provocative stuff…and a look at how the Cold War played out on one of its more spectacular fronts.