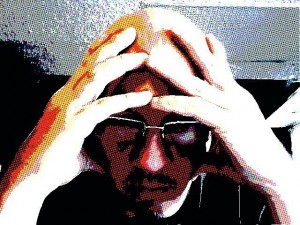 In Outliers, Malcolm Gladwell posits what we might call the 10,000-Hour Theory – that is, to become exceptional at something, you have to dedicate 10,000 hours to it. Whether you’re an aspiring concert violinist, a hockey player, a business analyst, whatever, it takes the equivalent of three hours a day, every day, for more than nine years to separate yourself from the pack.

10,000 hours is a lot of hours, especially if your area of specialty, your passion, the hateful beast that you can’t live without no matter how hard you try, is mine: writing.

A small team of us (myself, Mike Sheehan, Brian Angliss, Jim Booth, Denny Wilkins, and Gavin Chait, plus Edmundo Rocha, Rori Black, Robert Silvey and the late Martin Bosworth) launched Scholars & Rogues in April of 2007, and this marks my 1,000th post to the site (932 under my own name and 68 writing as my alter-ego, Dr. Sidicious Bonesparkle). That’s better than 250 posts a year, and this is just what I have done explicitly at S&R. That doesn’t count posts for other sites. It doesn’t count the hours I’ve spent working on my creative writing. It doesn’t count work (I do a lot of writing to pay the bills). And it certainly doesn’t count my personal correspondence, which can be daunting. For instance, I’ve sent in excess of 1,000 e-mails in past month alone. Not all of them were War and Peace-length, but some were fairly involved. If each sent mail took a couple of minutes on average, that’s over an hour a day. Heck, that means that doing e-mail alone since the turn of the century would have gotten me about 40% of the way to my 10K hours.

There’s honestly no telling how many hours I’ve spent trying to make words behave the way I want them to in my life, but we blew through the Gladwell Mark a long, long time ago.

My contributions to Scholars & Rogues have been tremendously varied. My first post was political: I went to see Joe Wilson (you know, Valerie Plame’s husband) at the Conference on World Affairs and passed along some of his thoughts (such as his assertion that Fred Thompson is “a member of the treason faction of the Republican Party”). A good many of my subsequent posts have been political, too, although I’m doing a lot less of that these days than I used to. I’ve also written about music, the arts, literature (especially poetry), media, business, sports, education and American life and culture (both popular and otherwise). I’ve addressed the ridiculous and the sublime. I’ve offered up lengthy analyses and brief drive-bys. I’ve done serious and mad and light and funny. I’ve been shamelessly self-promotional and I’ve devoted a lot of energy to promoting the talent of others. I’ve been brutally critical at times and insufficiently critical at others. I have written about subjects where I know a great deal but I’ve never let the fact that I wasn’t an expert get in the way of an emphatically worded opinion, either.

I hope, along the way, that I have informed and entertained, enlightened and challenged, and I accept that I have done my share of antagonizing, as well. So be it. If you never upset anyone, you’re wasting people’s time. We live in a society where some people aren’t nearly as angry as they should be and a lot of other people are consumed by a level of anger that’s surpassed only by the level of their own ignorance. For my part, I rarely bother reading people who are predictable. If I know what you’re going to say on a particular topic, then really, why read it? I try and apply that same filter to my own thinking and writing as much as I can – the choir doesn’t need a lot of preaching to these days, so I feel like I should either be taking the choir someplace they weren’t expecting to go or I need to be talking to a different audience.

When you write a thousand posts in four years, it’s inevitable that you’re going to reveal a lot about yourself. I haven’t done much in the way of personal essay and I haven’t made my personal life the center of my mission at S&R. In fact, there’s a lot that you can’t learn from 250 posts a year, although you might infer some things. For instance, I didn’t really write about the growing unhappiness in my personal life. I didn’t write about the collapse of my marriage. I haven’t written directly about career frustrations. But a reader paying close attention couldn’t have helped noticing, especially in the period between Barack Obama’s inauguration and early last year, when my wife and I separated, a corrosiveness, a consumptive bitterness at the heart of the words. My political writing, for instance, grew more and more vehement as it became clearer that we had not, in fact, elected what we thought we had in 2008. I even developed an alter-ego (the aforementioned Dr. Sid, who has since been reassigned to happier challenges) as the mouthpiece for my meannest assaults on corruption and ignorance.

Looking back, I can’t argue that the public figures I was stomping didn’t deserve it, but the problem was that I was investing hours, hundreds and thousands of hours, to negativity, to an inner toxicity that was eating me alive. Personal misery found subversive release in political writing, and the rage of that process energized a self-destructive feedback loop that kept on spiraling downward.

It was a dark time. A dark time in which I was taking way too much empty satisfaction for my own good.

Early last year, I realized that Evil Dr. Slammy had to die. So I stopped writing about politics so much. The realities of our political mess angered me to the point where, as I say above, I was damaging myself. When I did write about it, I worked very hard to approach things from the most positive angle possible. And I wrote about things that genuinely matter to me, like poetry. (I also started spending a lot more time writing poetry, and the results have been gratifying.) Sam 2.0 was very good for me, in just about every way possible. It didn’t solve the objective issues in my personal and professional life, but it gave me a stronger platform from which to confront these issues.

Then, last month, I turned 50. I marked the day by posting a poem I had written to mark the milestone, although I didn’t explain either the poem or its motivation.

The point of all this isn’t to be confessional. I’ve never been much of a confessionalist, to be honest. Instead, it’s about 1,000 posts and four years and the 10K-Hour Theory. As I was explaining to someone recently, 10,000 hours isn’t something you do. When you invest that much of yourself into something, it’s because that’s the thing you can’t help doing. After 10,000 hours – or 20,000, or 30,000 – it becomes what you are.

Nothing – no job, no person, no hobby – has claimed more of my life since April 2007 than Scholars & Rogues. For better or worse, S&R’s mission and the staff driving it have been my greatest commitments and I’m insanely proud of what the S&R team has accomplished. My partners in this venture have contributed several thousand posts of their own, articles of tremendous intelligence and wit and insight and diversity, and if ever a writer needed inspiration here it is: if you don’t bring your A-game, you’re going to look very bad in comparison with what this team is producing.

So, what about the next 1,000 posts? In 2010 I had to admit that, as much as I wanted to change the world, I wasn’t going to do it by yelling at idiots and trying to reason with those clothed in fact-resistant armor. My only hope for being part of the change I so desperately want to see in our society is to show people what a better life looks like. Instead of trying to lead by berating, I have to try leading by being the sort of person others want to emulate. I’m not sure what kind of success I’m going to have, but I can’t go back to Toxic Slammy 1.0.

This probably means more posts aimed at introducing you to music I think you’ll like. I’ll try and help pave the way toward more ethical, pro-human business practices by American companies so that my fellow citizens, when they wake up on Monday morning, think “yes!” instead of “oh, no, not again.” I’ll occasionally try to make some sense out of the our sports-crazed culture. I’ll continue to care a great deal about the state of education in the US, although I’m probably going to be depressed about it.

And while I don’t expect anybody to care as much as I do, I’m going to periodically make racket over literature. A society that has a proper relationship with poetry rarely has to worry about its politics, I’ve always felt.

Besides, this is a writer’s journey. I can’t be true to the audience unless I’m true to myself, can I?

Tagged as: blogging, my memoir