Two and a half cheers for World Book Night 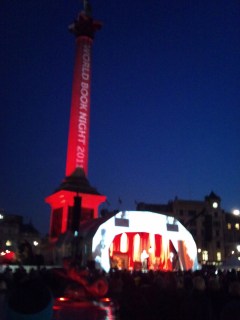 So Saturday was World Book Night. It was actually an all day thing for most of us, and really started Friday night at Trafalgar Square. This was a big deal—giving a million books away free. What a great concept. I stumbled across this a couple of months ago, I can’t even remember where—probably on one of the SF writer blogs that I hit regularly. So I went and signed up to give away books, free, to anyone I felt like—friends, neighbors, complete strangers. There was a list of 25 books, selected by a panel, and I picked one of my favorites—Love in the Time of Cholera, by Gabriel Garcia Marquez.

I love the idea of this. Yes, it’s probably at root some marketing thing from the publishing industry, but, at the same time, I don’t care. Just the idea of giving one of your favorite books to someone you know or don’t know, and not knowing what the reaction will be. But I hope, of course, that it’s that same that mine was when I first read it two decades ago—the incredible lushness of the language, the story that sweeps you away, and not a hint of magic realism in sight. It’s one of Garcia Marquez’s masterpieces, right up there with One Hundred Years of Solitude. I picked up my 48 copies on Thursday night.

So Friday night I met Mrs W at the National Gallery, and off we went, wristbands in hand, into the Square, where there was a stage set up for the readings. And it was great. Really cold, but great. Alan Bennett, Edna O’Brien, Philip Pullman, Sarah Waters, Margaret Atwood, John Le Carre, all hosted by Graham Norton in unusually subdued form. And then Saturday, with 48 books to give away. Actually, I already had a bunch lined up—the good old Orlando Chamber Choir (getting ready for our next concert in two weeks) was having an all-day rehearsal. So on the way down to the rehearsal I stopped off at my local bread place and got a croissant, and started asking around among the people eating their croissants and drinking their coffee if they wanted a free book.

Well, practically everyone there took one, so that was six or seven right there. The Polish guy behind the counter asked me to sign it, but I showed him the signature in the back. Right next to my number, the one I put in every book so it can be tracked, since the whole idea is to pass the book on once you’re read it. So let’s say everyone of my 48 recipients passes it on, and then it gets read again and passed on, and so on. How to change the world in six easy steps. Then on to the tube, where I bumped into someone I knew who didn’t need a copy, but the woman sitting on the bench overheard and was curious, so she got one too. Then about 25 at the rehearsal. And another eight or so at the pub during lunch. And one or two outside the church where we were rehearsing.

So I ended up back at home with another half dozen or so left, so some went to friends in the building, and one to some friends at lunch on Sunday, and I’m holding one for someone who couldn’t make rehearsal. And I’m down to my last copy to give away. I’m thinking, well, it’s been two decades since I read it, I’ll read it again, and then pass it on. I’ve got a copy (first edition) somewhere, but Lord knows where it is, so this will do. And I like the idea of passing on a copy that I’ve read.

I imagine readers everywhere in London and around Britain and Ireland are doing the same thing. Cataloging who the books have gone to, and since everyone picked their own boo, and it’s presumably a favorite, they’re all hoping that all those books will have the same impact as when you or I or they first read it. Because books do that sometimes. I can’t remember who said it, but someone has suggested that of all of humanity’s inventions, fiction tops the list—because that’s the thing that really lets us see inside other people. I can’t imagine that the people on the receiving end of the million books that are being passed out really need that lesson—but every new book just transforms us all a bit more, and hopefully for the better.

But I have to agree with Stephen Hunt on the book selection. This is a pretty mainstream selection. It could have used a little oomph. Not that there’s anything wrong with any the 25 books chosen—some are classics, and all are worth reading. But they’re all sort of mainstream, modern fiction. Philip Pullman got on there because they needed a Young Adult selection, for heaven sake. There’s a distinct lack of any strong genre fiction–science fiction, fantasy, mysteries, even whatever genre those Stephanie Meyer books fall into. Hunt goes a little overboard, as Steampunkers tend to do, but he does have a point. LeCarre, but no Tolkien or CS Lewis. Garcia Marquez, but no magical realism. Sarah Waters, but no Susannah Clarke or Michael Moorcock. No JG Ballard, or Iain Sinclair, or Ian MacDonald, for that matter. Seamus Heaney, but no Flann O’Brien. Nothing outside of the mainstream Guardian readership. And while what’s there is fine, much of indeed great, we could use a little boundary stretching here. This is a comfortable list.

So two and half cheers—great concept, great involvement, a great thing to do, and I enjoyed every minute of it. But if we do it again, let’s expand our horizons a bit. Still, a great event.

Note to self: the next time you’re offering a free book to strangers on the street, don’t be standing in front of a church.