Skepticism vs. Denialism and how to tell the difference 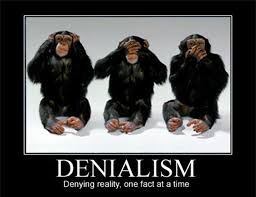 I suppose, as a general rule, the human animal is built to prefer knowing to not knowing, but I have been struck over the course of the past decade or so at how much worse our society has gotten at tolerating uncertainty. It’s as if having to say “I don’t know” triggers some kind of DNA-level existential crisis that the contemporary mind simply cannot abide.

Perhaps this is to expected in a culture that’s more concerned with “faith” than knowledge, reason, education and science, but even our extremely religious history fails to explain the pathological need for certainty that has come to define too much of American life. Perhaps it’s due to fear. America is currently being slapped about by one hell of a perfect storm, after all:

Of course, nobody wants to be perceived as fearful or ignorant or overwhelmed or reactionary. Humans seek legitimacy for themselves and their beliefs, and in such a complex age it’s probably to be expected that we would see a rush to cloak fundamentalist impulses in the language of education and progress. Some are fine retreating into ever more regressive religious community, but more and more we’re seeing an appropriation of words like skepticism and debate, terms that attempt (often with some success) to situate pretenders in the midst of the scientific process.

The truth is that a great many people who call themselves skeptics these days are nothing of the sort. “Skeptic” is a word with a long tradition in the context of good faith inquiry into the workings of our universe. While it’s impractical to ask that everyone familiarize themselves with that entire philosophical heritage, it is time we paused to consider the term in light of how it is used and abused in the controversies of the present moment and to assert a productive operational definition that helps us better distinguish who’s working to understand vs. who’s working to obfuscate. The more we allow the term to be bastardized and deployed in ways that are antithetical to its actual meaning, the more we undermine the scientific process itself. We must therefore insist on the appropriate use of “skeptic” and we have to be determined in calling out those who distort the word either out of ignorance or in the service of cynical political pursuits.

So let’s take a stab. In essence, a genuine skeptic is someone who approaches claims to knowledge with a stance that insists on rigorous standards of evidence and demonstration.

When presented with a proposition, he or she asks “what evidence do we have to support this claim?” Evidence is scrutinized with a critical eye, and he or she thinks about things like possible alternate hypotheses. Is the condition or phenomenon real? If so, what else would it explain it? Is the evidence credible? Are those arguing for or against the hypothesis credible? Can findings be replicated? And so on.

Skeptics holds themselves accountable to a high set of intellectual standards and act according to the good faith assumptions of the community of research and inquiry of which they are nominally a part. They understand that intellectual pursuits are ultimately communal, in that all involved operate according to a shared set of rules and ethical codes. This doesn’t mean the process isn’t occasionally confrontational and even antagonistic – it certainly is, and a rigorous process demands it – but it understands that the laws of the universe don’t conform to “us vs. them” partisanship.

The genuine skeptic has a mind that’s large enough to accommodate states between “proven” and “false.”* That is, the skeptic understands that sometimes we just don’t know yet and he or she is comfortable saying we don’t know. The skeptic often encounters cases where it seems possible, perhaps even likely, that a proposition is true, although the evidence to demonstrate it conclusively hasn’t been presented yet. When asked about such a case, that’s exactly the answer he or she gives – the evidence we have suggests X is plausible, although we need  more study. A really informed skeptic can then tell you, in some detail, what kinds of study are needed and precisely what standards of proof need to be met in order to move the needle forward (or backward).

In other words, skeptics are at ease with uncertainty. They know that it’s impossible to know everything. And they feel no compulsion to arrive at a conclusion before its time, whether that conclusion is an acceptance of a hypothesis or its rejection.

What the skeptic does not do is reject a proposition out of hand. With respect to hypothesis X, there is always a deliberative phase between proposal and conclusion, where there is a certain amount of evidence and discussion and debate, but well before there is enough to either demonstrate truth or falsity. The person who asserts that the lack of definitive proof means the proposition is false is, by definition, not a skeptic. That person is a denier (and there are other, less charitable words, as well). With this crowd, the rejection of anything that can’t be proven conclusively tends to go hand in hand with a set of criteria that is unreasonable and migratory – that is, they tend to move around, and especially skitter in the opposite direction as evidence approaches.

Find the Skeptic: A Hypothetical Case

A study conducted by researchers at Upper Midwestern University in 1995 asserted that the air is getting thicker. Several hundred subsequent studies by researchers around the world over the past 15 years generally confirmed that the air is, in fact, getting thicker. There is some debate over the cause, although a strong consensus of atmospheric scientists are convinced that it’s a result of microwaves interacting with certain common airborne pollutants. There are, to date, no independent, peer-reviewed studies that demonstrate no thickening effect.

If the trend continues, some scientists believe the Earth’s population could choke to death on the thicker air within a century.

Who among the following is a skeptic?

A: Ray Rogers, publisher of ThickeningThugs.com, a blog dedicated to debunking global thickening claims. Bill meticulously collects and refutes all the stories he can find that point to the conclusion that the air is getting thicker. He regularly publishes articles from others who oppose thickening theory.

B: Bob Bird is a professional chemist who devotes significant amounts of his free time to researching the subject of global thickening. While not positioned to conduct his own primary research, he has performed a good bit of mathematical analysis on the data that’s publicly available. His conclusions support many of the UMU team’s findings, but he believes there is potential merit to findings by scientists in Australia dismissing the microwave link and pointing instead to increases in chamomile cultivation.

C: Sen. Mike Morris chairs the subcommittee on atmospheric research. He has been vehement in asserting that there is no credible evidence pointing to atmospheric thickening.

D: Sen. Diana Deane, who also serves on the subcommittee on atmospheric research, says that there are many studies that contradict on the question of thickening and calls for more research.

E: GADZO1979 spends several hours a day on news sites and blogs arguing thickening with any proponents he/she can find. GADZO is remarkably well-armed with data and is often successful at overwhelming bloggers and commenters with evidence that debunks the theory.

F: Janet Johnson, who heads the Atmospheric Research Centre at London’s famous Prestigious University of England, concurs with the basic finding that the air is getting thicker. However, she argues that the thickness of Earth’s atmosphere has historically been cyclical. Furthermore, she argues that the UMU sample only looked at a five-year slice of data from the late 1980s and early 1990s and says that microwave technology has changed since then, with no noticeable effect on the UMU team’s thickening curve.

G: Albert is a frequent commenter on a wide variety of blogs. He makes liberal use of scripture asserting God’s dominion over the Earth and concludes that when the Lord next destroys the world it will be by fire, not air.

H: Americans United for Responsible Science is a well-funded grassroots organization that promotes a variety of research demonstrating that microwave technology doesn’t interact with airborne pollutants. They also distribute a series of white papers indicting the findings of thickening researchers.

I: Harry Harrison is a popular syndicated political talk radio host. He talks about the thickening debate regularly and points to all the conflicting research. He’s worried about the environment for his children and grandchildren, but doesn’t see how we can arbitrarily act against businesses without proof.

The answer? F. And perhaps B. Dr. Johnson acknowledges the overwhelming body of research pointing to the existence of thickening, but raises legitimate questions about the sufficiency of the data pointing to the microwave link. She doesn’t, at this stage, see enough evidence to either confirm or dismiss the hypothesis. Bob has devoted a lot of energy to understanding the question as a lay researcher, has used his own professional skills to examine the data, and continues to explore research that both supports and denies the microwave theory.

The others? Ray isn’t a skeptic – his mind is made up, a priori, and his purpose isn’t to seek knowledge, it’s to debunk and derail. Sen. Mike isn’t a skeptic, he’s an uninformed idiot, a species that isn’t hard to find in Congress. Sen. Diana is an enabler – the mass of evidence tilts toward thickening and the studies that dispute the theory are neither independent nor peer-reviewed. Take a close look at who her campaign contributors are – she’s getting significant money from microwave manufacturers, as are the perpetrators of the conflicting “research” she cites.

GADZO1979 has a lot of spare time and lots of “evidence.” Those of us working regular jobs don’t have this much in the way of time or resources. Odds are pretty good that GADZO is a paid sock puppet who operates under a number of false identities.

Albert is your basic nut. And Americans United for Responsible Science – a “well-funded grassroots” group? That isn’t grass, that’s astroturf. They’re a front for one or more microwave manufacturers and their “research” has been authored by the industry’s version of the Tobacco Institute.

And for Harry, the term you’re looking for is “concern troll.” His audience likes to think of themselves as informed and skeptical, when in fact they’re neither. Whatever Harry himself may believe, he knows which side of the bread is buttered.

The case here is hypothetical, but the dynamics are all too real. Each one of the people above would probably self-identify as a skeptic, but most are actually deniers with agendas – some paid, some motivated by other factors.

We have too many legitimate issues facing our society to allow noisemongers masquerading as skeptics to gum up the works using strategies like concern trolling, faux-debating, and Barking Lord Monckton’s favorite, the “’proof by verbosity,’ aka the ‘Gish Gallop’.”

Real skepticism is an essential part of the search for knowledge. But it only works if we call out those who would use our intellect and good faith as a weapon against us.

* NOTE: I use terms like “truth” and “proof” in this piece advisedly. The scientific process steers well clear of such terms in most cases, and I use them here in a vernacular sense only.