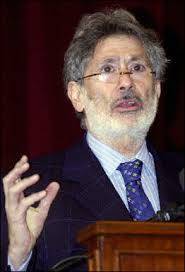 The recent popular democratic movements in Egypt and elsewhere in the Middle East and North Africa would have delighted the late Edward Said, although he would also be properly appalled by the most recent events in Bahrain and Libya. Long a critic of Western paternalism towards the Mideast, he would have been charmed by the fact that the Egyptian people basically overthrew a dictatorship without outside help, and largely non-violently to boot. Of course it’s not over yet, the army is still in charge, and who knows how this will play out. But it’s a vindication of one of the major preoccupations of Said’s intellectual and cultural career—the relationship between Western imperialism and its cultural legacy of hostility to non-Western cultures. That he was able combine this career as a political and cultural activist, particularly on behalf of Palestinian statehood, along with a distinguished teaching career at Columbia (one of his students was Barack Obama), and along with a distinguished career as a music critic, and the creation of one of the most remarkable symphony orchestras in history, is a testament to a remarkable intellect and a remarkable man. Said’s death from leukemia eight years ago (after a 14-year battle) has deprived us of one of the most interesting minds of recent memory. Said was interested in so many things, and has so many impacts on so many fields, that a simple homage can‘t do him justice.

I first came across Said, as many did, through his seminal work Orientalism sometime in the 1980s. First published in 1978, Orientalism laid out Said’s thesis, which continues to prove controversial, that the West continues to portray non-Western cultures—in this case Arabian and other middle-eastern vultures—through the prism of Western imperialism with a Eurocentric frame of reference. Said went further, actually—he argued that the false assumptions underlying American and European views toward the Mideast were used as an ongoing justification for neo-imperialist occupations. As Said phrased it, Middle Easterners were viewed as being either oil suppliers or terrorists. This thesis has been provoking endless arguments over Said’s scholarship since Orientalism first appeared.

But as Said argued convincingly and compellingly through his life, it’s still the case. One of his more remarkable books is Covering Islam, in which he looks at how the middle-east is portrayed in the Western media. It’s a good thing he’s not around to see how many of the popular movements of the past two months have been discussed on CNN and in The New York Times. The former seems to bring every story down to whether or not the Muslim Brotherhood will benefit. The latter seems solely concerned with whether any of this will affect Israel. In both cases, we’re seeing Said’s thesis constantly and disappointingly affirmed.

As described in Out of Place, his autobiography (and one of the most interesting autobiographies I’ve ever read), Said is a product of multiple cultures. Coming from a family of Palestinian Christian heritage who ended up in New York City teaching comparative literature at Columbia, Said is well-equipped to deal with the tensions of carrying multiple cultures and their contradictions. Said describes his early childhood in Palestine, and then we’re off to Egypt, where his family, successful businessmen, moved among other families displaced by the formation of Israel. Said’s tales of growing up in the two cultures of Jerusalem and Cairo is a deeply moving one, as any tale of disrupted childhood invariably is. But it also explains how and why he came to literature, a lifelong passion and career, and political activism, and music.

Said was active in the cause for Palestinian statehood for decades, and took a lot of grief for it in America, where he would receive death threats periodically, and Israel, of course. A firm believer in the two- state solution, he was equally appalled at Israeli intransigence and Arafat’s grandstanding. He was a member of the Palestinian National Council for a number of years before breaking with Arafat, but maintained a lifelong commitment to the Palestinian cause.

For a tribute to Said, see here; for an alternative view, and a particularly negative view of Said’s scholarship, see here; for a response, see here; for a more balanced view of Said’s scholarship, see here; and for a larger set of reactions to Said’s influence across a number of domains, see here. I’m not a trained historian, especially of a region of the world where the main languages are ones I don’t understand, but it does seem that there are some valid criticisms to be made of some of Said’s scholarship—but as Terry Eagleton points out in his commentary, Said got the general overall story correct. It’s difficult to disentangle the criticism of Said from the larger political context in which the Palestinian statehood issue regularly takes place, especially in the US. For example, a documentary narrated by Said about Palestine for the BBC called In Search of Palestine was broadcast in the UK in 1998. The BBC has been unable to get it onto US television. This is not unexpected, of course, and there’s little reason to expect any change in the near future, sadly.

Said was also a prodigious musician, as an amateur pianist, and also as a critic. He was the music critic for The Nation for a number of years, and his reviews for that period are collected in Music at the Limits, which reveals the breadth of his interests. A bit too much opera for my taste, but his observations on pianists are astonishing, especially his observations on the deteriorating genius of Glenn Gould. How could someone with such a rare musical intelligence be so accomplished at everything else as well?

But for all these intellectual influence, perhaps his finest achievement was the result of this friendship with Daniel Barenboim, one of the world’s greatest pianists and most distinguished conductors. The two had become friendly during the 1990s, almost by accident. Both had backgrounds as peace activists in the Middle East. Barenboim has had his own share of controversies in Israel, of which he is a citizen, a fact that did not prevent him from becoming embroiled in a huge political controversy when he attempted to perform Wagner. In 1999 Said and Barenboim acted on an inspired idea—that music really could be used a tool for peace. Together they founded the West-Eastern Divan Orchestra, named after writings by Goethe, who himself had a fascination with middle eastern cultures. The idea was elegantly simple—create a youth orchestra of musicians from Israel and all its neighbors. And they did, and its impact has been profound. The orchestra, originally founded in Weimar (Goethe’s home) but now based in Seville, has been enthralling and enchanting audiences for years.

We are fortunate enough to be at one of the first London performances back in 2004, a concert that was actually a memorial concert to Said himself conducted by Barenboim. It was one of those special lump-in-the-throat moments. We were lucky to get tickets, in fact, and it was classical music groupie’s heaven. I can’t tell you whom we were sitting next to, but there were dozens of conductors and singers and whatnot in the audience—it was pretty edifying to be sitting among all that talent. But what was on the stage was extraordinary, both visually and musically. Visually, because it was an amazing cross-section of middle eastern nations, many in somewhat traditional garb and headgear, many in concert performance gowns and dinner jackets, all playing Western music. And musically, it was a remarkable performance. I still have the program. Beethoven’s Third Piano Concerto, with Bareboim conducting from the piano, has never sounded so spirited, and Tchaikovsky’s Fifth Symphony, played by Israeli, Palestinian, Syrian, Lebanese, Jordanian and Egyptian musicians, none over the age of 26, was sublime.

If Said left no other legacy than this, it alone should ensure our gratitude. As Daniel Barenboim commented on the West-Eastern Divan Orchestra, its purpose was not so much to promote peace as to fight ignorance. Which seems to be a good summing up of Edward Said’s life’s work.