How to save the world 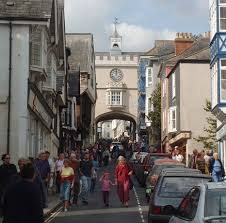 A couple of years ago we were on holiday out in Devon and Cornwall for a week or so, and on the way back stopped off in Totnes. Totnes is a small town—well, not that small. It has a population of 7,000 or so, a good size for a town. That’s an important point, size, as we’ll see. But it’s a lovely spot, with a fine long High Street that hasn’t been completely taken over by chains, a fine bookstore (always a defining criterion), and, well, just a nice feel to the place, lots of tea shops, and several interesting looking pubs, another good sign. I’ve got an informal barometer for the well-being of a place that depends on some complicated calculus that I couldn’t possibly explain involving bakeries, bookstores, libraries, concert venues, tea shops, pubs, being near the water, and walking. It’s an old hippie town too, which makes it even better. Undoubtedly there’s a vinyl store somewhere too. It turns out my instincts were sound in this case. Because Totnes is one of the leaders of the Transition Towns movement here in the UK, and idea that seems to be spreading like wildfire around the world. In fact, they more or less invented the concept.

Well, more specifically, a fellow named Rob Hopkins invented it, tried it out in Ireland with mixed success, and moved to Totnes several years ago to try it again. Hopkins had this notion that the only really effective response to two apocalyptic trends—global warming and peak oil—would be at the local level. But this would only work in certain kinds of communities. It has to be a community where you can involve people at the local level. It’s really that old “Think globally, act locally” concept updated for he 21st century, when oil is $100 a barrel, solar cells and panels are cheap and getting cheaper, and people are actually willing to try now concepts if they work—planting nut trees around the town to provide free nuts to anyone who wants them.

The Guardian had an article not too long ago that lays out what Totnes has done, and is doing now, and is planning on doing in the future. Hopkins arrived in 2005, and started talking with people. It helped that he had a pretty clear idea of what he wanted to see happen, an idea—or set of ideas—that he had developed while living as a teacher in Ireland. Lucy Siegle lays it out for us:

The Transition movement works on the basis that if we wait for government to act on issues such as climate change we’ll be waiting until hell freezes over; and if we only act as individuals, that’s too little. So it’s working together as communities where the real change will happen. In offices on that steep high street, squeezed between the pet shop and a travel agency, Transition Town Totnes was formed, swiftly followed by the Transition Network, to support the growth of the movement outside Totnes.

There are now more than 350 Transition movements, 200 of them in the UK. Last month the first Australian region, Sunshine Coast, became an official Transition Town. Hundreds more communities are mulling over the idea of embracing Transition (they are known as mullers). While there has been some debate among greens as to whether Transitioners are right to put so much emphasis on peak oil, and whether climate change should really be the main driver for change, it is clear that the strategy laid out in the latest Energy Descent Action Plan is one that will protect communities in the event of both oil shocks and climate change (and possibly economic shocks, too). It certainly beats stockpiling tinned food and buying a firearm.

As I leaf through the neat action plan, it brings order to apocalyptic scenarios and creates a vision of how Transition Town Totnes could be in 2030. Some strategies are niche, but some strategies are the stuff of market-town revolution. George Heath ran a flourishing market garden in the 1920s; his son inherited the business, opening a shop on the high street to sell the local, fresh produce. Today David Heath, his grandson, shows me the site of the market garden and large urban greenhouse in the centre of town. Since 1981 it’s functioned as one of the town’s main car parks. The Transition plan is to convert it back to a market garden by 2030. How close is the town to realising its alternative narrative?

Of course, there’s always someone who is unhappy:

“We did have a German visitor who was very disappointed,” says Brangwyn, “because there were still cars in the town and there were no goats on the roof.” Totnes hosts an increasing number of Transition pilgrims who want to see what’s going on, and, says Brangwyn, “People have different expectations. We’re not going to make big visual changes overnight. Transition is ground up, it’s about people doing the work for themselves. So the culture has to change first.’

The Transition Town movement is something to behold. It seems to have galvanized action in a way that other green activist movements have not, mainly because it brings everyone in on the action and the planning. And it’s really taken off. They’re all over Britain, and spreading like crazy. Ed Miliband has got the Labour party looking at it as well. Well, Labour needs something, so it might as well go with something sensible instead of their usual claptrap.

You’re not gong to be doing it alone, and that’s the point. It will help, of course, if you live in a place that lends itself to this sort of thing. Here in Britain, there are lots—villages and small towns are pretty much to be found everywhere—it’s one of the things I love about the place. There are always some local farms nearby and these are places where you can usually walk to where you need to go. The scale is right for this. In the US, it’s a bit different of course, but somehow university and college towns come to mind here—there’s a ready stock of people who will want to lend themselves to his sort of thing. The US might be harder in general, though, simply because it’s so big, and it’s moved the production of food so far from where most people live. But you start where you can.

It’s starting to spread, too. There are Transition Town networks all over the place now—the US, New Zealand, Australia, Europe, and there’s even some interest in Japan. The wonders of the internet. I’ve never been to Australia, but I think it’s big, so it might have some of he same issues that places in the US will face. We’ll see.

And there’s even an attempt to develop a Transition Town in the Borough of Brixton right here in London, which I find intriguing. One in Tooting, too. London is a huge city, so doing something like this on a city-wide basis is probably impractical, at least at first. But the whole point of Transition Towns is that they’re small—and what is a city, a proper city, but an aggregation of neighborhoods.

I like this. I’m going to see if anyone is doing this in Camden. This has a lot of promise, I think. And if I ever get tired of London, Totnes looks like a pretty good place to end up.