The grace, courage and humanity of Terry Pratchett

Terry took Death’s arm and followed him through the doors and on to the black desert under the endless night. 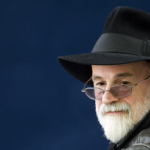 The words are Pratchett’s coming at the end of his Richard Dimbleby lecture, Shaking Hands With Death, and spoken, with tremendous compassion and composure, by his good friend Tony Robinson.

We arrive and leave life on our own.

Along the way we make friends and find ways of expressing ourselves, our goals and our vision. If we are very fortunate, we find others whose ideals resonate strongly with our own. If we are tremendously fortunate, some of those others are great writers whose words we can borrow to explore the ideals we lack the language to express.

25 years ago I read Strata. I was 12 years old. Exactly that cusp between the ignorance of childhood and the idealism of being a teenager where influences can have a lingering effect. Strata wasn’t a good book. I was a sufficiently voracious reader to know this, but it held tremendous promise. It also featured one of Josh Kirby’s insanely engaging covers.

I hoovered up everything he’d written to that date: The Colour of Magic, The Light Fantastic, Equal Rites and Mort.

Speaking in 1985, after the success of Equal Rites, Pratchett set the tone for the future:

“But I must accept that people called witches have existed. In a sense they have been created by folklore, by what I call the Flying Saucer process — you know, someone sees something they can’t or won’t explain in the sky, is aware that there is a popular history of sightings of flying saucers, so decides that what he has seen is a flying saucer, and pretty soon that “sighting” adds another few flakes to the great snowball of saucerology. In the same way, the peasant knows that witches are ugly old women who live by themselves because the folklore says so, so the local crone must be a witch. Soon everyone locally KNOWS that there is a witch in the next valley, various tricks of fate are laid at her door, and so the great myth chugs on.”

“Now you can take the view that of course this is the case, because if there is a dirty end of the stick then women will get it. Anything done by women is automatically downgraded. This is the view widely held — well, widely held by my wife ever since she started going to consciousness-raising group meetings — who tells me it’s ridiculous to speculate on the topic because the answer is so obvious. Magic, according to this theory, is something that only men can be really good at, and therefore any attempt by women to trespass on the sacred turf must be rigorously stamped out. Women are regarded by men as the second sex, and their magic is therefore automatically inferior. There’s also a lot of stuff about man’s natural fear of a woman with power; witches were poor women seeking one of the few routes to power open to them, and men fought back with torture, fire and ridicule.”

“I’d like to know that this is all it really is. But the fact is that the consensus fantasy universe has picked up the idea and maintains it. I incline to a different view, if only to keep the argument going, that the whole thing is a lot more metaphorical than that. The sex of the magic practitioner doesn’t really enter into it. The classical wizard, I suggest, represents the ideal of magic — everything that we hope we would be, if we had the power. The classical witch, on the other hand, with her often malevolent interest in the small beer of human affairs, is everything we fear only too well that we would in fact become.”

In Equal Rites, a story where a young girl wants to study at the wizard’s university but isn’t permitted because of her gender, Pratchett had started flirting with some of the bigger themes that would come to dominate his work.

And they are big themes. Of freedom from tyranny, individuality versus dogma, rationalism in the face of superstition, compassion even for those whose evil is all-consuming, and of dying and Death.

Death’s popularity as the opener of the doorway to the desert that lies between the living and the lands beyond was cemented in Reaper man. Death is displaced by the auditors of reality and is dispatched to live, and die when a new death appears to replace him.

Death overcomes and learns a little about people. Death’s line, “What hope for the harvest if not for the care of the reaper man?”

This was 1991 and the book marked a subtle change that would find full expression in 1992’s Small Gods.

It’s an unusual book. The gods exist but they do so entirely subject to the level of belief that they can establish amongst people. In the land of Omnia, the church of Om is powerful but there is no belief. And Om spake unto Brutha, the chosen one, “Psst.”

The book is a meditation on belief, on its power for harm, on how religions beget religions, and on compassion. At the end of the book, and a long life, Brutha dies. He finds himself on the edge of Death’s desert. Cowering and weeping there, afraid to move, is Vorbis, the villain of the book.

Vorbis is evil. Pratchett delivers a character who is chilling for the callousness of his violence rather than its depth. We’re glad when he gets his just desserts.

Yet, at this moment, Brutha is consistent. He lifts Vorbis and guides him as they walk together into the desert.

Pratchett’s books change from there. His female characters have always been amongst the most well-written of any writer but now they took on a greater role. Characters, like Rincewind, who lacked an inner monologue had to be abandoned to bit parts. Characters with greater depth came to the fore.

By Monstrous Regiment he could take on the tale of a group of women, on the villainous side of the war, disguising themselves as boys and joining the army to escape, find lost lovers and missing family. Again, he takes on loss, the tragedy of tradition and rhetoric over logic and compassion.

Throughout the books one gains a sense of the sort of world Pratchett imagines. Death, in Hogfather, is almost Earth-human in his naïve way of wanting to solve humanity’s problems.

When Susan Sto-Helit (Death’s grand-daughter … long story) is trying to explain Death’s approach, she asks, “How would you go about feeding the hungry?” Bilious, the “Oh God” of Hangovers, responds, “Well, you’d have to start off with correct economic policy, and the …” “Yes,” says Susan, “but he’d just hand out food.”

In other words, the direct approach doesn’t solve the underlying problem of people being people. From The Times, about newspapers, to Going Postal, about the postal service, the Discworld develops. It learns. Technology (albeit, magical technology) grows. Unlike most fantasy worlds where magic just “is,” in Pratchett’s world it isn’t only studied but built on.

And so we come to a man who is both a social and economic liberal, who believes in freedom and responsibility that goes with it and who has built this into the fabric of his world. For most of the books this has been subtle.

In December 2007 Terry Pratchett announced that he had early-onset Alzheimer’s disease. I was at work when I read the news. I burst into tears.

Tragedy for anyone but a brutal and terrible punishment for a writer.

Making Money spelled out, in no uncertain terms, where Pratchett stands on economics. Hint, he’s with the free market.

Then came Nation, the most thoroughly non-Discworld novel he has written. In fact, almost not a fantasy at all. It is infused with some of the outrage he must feel. And he channelled it into Mau, “Does not happen!”

Mau is a young boy living on an island with the Nation, his people who are the whole world, as far as he knows. He goes away onto the island where boys go to become men. On his way back, in the in-between state between boyhood and manhood a tsunami changes his world and kills everyone on the island. A passing British ship is slammed into the centre of his island. There is one survivor, a young girl. Together they must figure out what happens next.

It’s a beautiful book. I hold it in my hands sometimes just to be near it. It takes on notions of tradition, of faith, of science and of knowledge. “Thinking. This book contains some. Whether you try it at home is up to you.”

The Tiffany Aching series is even broader. We chart, through four books, the life of a young girl who becomes a witch and learns of the price and responsibility that this brings.

I’m not sure that I can do justice to all that his books carry and mean. There are thousands of Web sites dedicated to the best of Terry Pratchett’s quotes and one-liners. He has a phenomenal talent and ear for the comedic line and situation. But his compassion for his characters and their very real human limitations is what shines through for me.

Since 2007 Pratchett has taken on a new challenge: overcoming the stigma and taboo of discussing dying and death. As our societies have extracted risk and caged it, dying has become an embarrassment we’d rather not contemplate. But Pratchett knows his death will be unpleasant and a terrible burden to those he loves. He wants the choice of his own departure.

When it is my time to go, I hope I can do it with even part of his courage, compassion, wit and style.