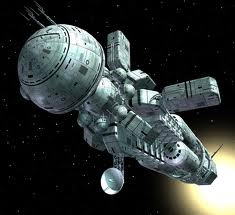 NASA and its spooky Sith-lord counterpart, the Defense Advanced Research Projects Agency, are teaming up to achieve the impossible: interplanetary colonialism. DARPA, known for its role in developing such technologies as the internet and GPS, has also funded cyborg beetles implanted with electrodes that control their flight by radio, battery powered human exoskeletons, and ravenous robots called EATRs which find and consume biomass (read humans) for fuel.

The stated purpose of DARPA is to maintain military supremacy through technological superiority. During the dark nights after Sputnik first blinked overhead, Americans gathered in their bomb shelters and grumbled that we should do something before the other guys do it to us. In our innocence, we had no idea what that something might be, so we put together a crack team of scientific geniuses to discover it.

You may not remember when NASA ran out of funding for the X-37B space plane and the Air Force took control of the project. The unmanned 220-day maiden voyage, directed by the Air Force Space Command 3rd Space Experimentation Squadron, was a secret mission. No data on design specifications, technical capabilities, orbital trajectory, mission objectives, nothing. They did tell us the vehicle is equipped with a self-destruct mechanism, in case anyone dares get close enough to take a good look.

The consensus is that it’s some kind of orbital spy platform. Because of the gag order, the USAF has never explained why it built a tiny space shuttle that can’t hold supplies for humans and can’t fit satellites in the cargo bay. Why does the Air Force need a space plane for surveillance? What does this space plane do that can’t be done by the SR-71, the U2, or any other machine from the catalog of fantastically advanced and superlatively expensive aircraft that we already have? Maybe photograph that new stealth fighter China tested during Secretary of Defense Robert Gates’ recent visit?

Our technological superiority may be in jeopardy, as it happens. Noshir Gowadia, one of the creators of the Northrop B-2 Spirit stealth bomber has been convicted of selling stealth technology to China’s People’s Liberation Army Air Force (PLLAF). Let’s not forget the Titan Rain cyberattack the Chinese military launched on Lockheed Martin, Sandia National Laboratories, Redstone Arsenal, and NASA. Let’s not forget Moonlight Maze, the marauding espionage network based in post-Soviet Russia that was probing Pentagon computers, Department of Energy computers, NASA computers, and numerous universities’ laboratory computers for years before it was finally discovered by accident.

Who rushed to the rescue after all this classified information was compromised? John P. Wheeler III, the distinguished defense contractor recently found murdered in a landfill in Delaware. At the time of his death he was working for Mitre, a corporation that manages federally funded research and development centers for the DOD, FAA, Homeland Security, IRS and Veterans Affairs. These organizations have names like “DOD Command, Control, Communications, and Intelligence.” They recently demonstrated a DARPA-funded robot that flies like a hummingbird.

Only days before his death, Wheeler wrote an email to his friend Richard Radez stating that the nation wasn’t sufficiently prepared for cyber warfare. Wheeler is the man who helped create the Air Force Cyber Command and the Cyber Research Center at the Air Force Institute of Technology. In court, he would be an expert witness. Thus, we can conclude that even our secret unmanned space plane is vulnerable to the information siphoning that has permeated our computer-dependent defense administration. Which means the other guys could build one and…do whatever we do with it.

But can they build the Hundred Year Starship? Listen to this: one-way colonization of Mars, four people in the lava tube caves with a nuclear reactor, solar panels, food for two years, and a farm based on Martian soil data. It’s the ultimate backup plan, a duplicate human race on a different planet. And of course we have to mount a second mission to bring supplies and more colonists, none of whom will ever return. Mars has water in the form of ice, and a thin atmosphere of 95% carbon dioxide (aka plant food). Robots grow the plants in a dome and harvest the oxygen. Humans arrive to a vegetable garden with a breathable atmosphere. At least 150 colonists are required for a viable gene pool.

Google co-founder Larry Page inquired about the cost of sending people one way to Mars. When told $10 billion, he asked “Can you get it down to 1 or 2 billion?” That’s a bold question to ask in uncertain economic times, but in many ways a Martian colony is awesomer than a house on the Riviera, even if you never go there yourself. Overpopulation is supposed to be the biggest challenge of the 21st century, and as competition for resources increases, a two year space cruise to a sci-fi Garden of Eden may become very attractive as a retirement option. Someone has to plant the first flag. Will it be USA, PRC, or Google? Would you go?