Saturday morning with cakes on the griddle 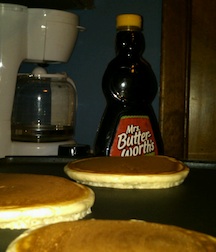 As the griddle began to heat up, it made a single loud crack. Then it sat silent for a couple minutes as I mixed my batter, then it cracked again.

Nothing broke. My griddle just likes to protest every time it wakes up.

I watched the little orange light next to the heat controller: It would go out once the griddle heated to 400 degrees.

I still had a few lumps in my batter to mix out, so I was in no big rush. I mix mine from a box of Bisquick. Nothing fancy. A couple eggs. A cup of milk. I’m golden.

I don’t do pancakes from scratch the way my dad’s mother used to. She had a secret recipe for buckwheat pancakes passed down from her mother—although, like everything my grandmother cooked, she’d profess that her pancakes never tasted as good as her mother’s. My brother and I thought they tasted just fine.

For whatever reasons, the buckwheat pancakes required refrigeration overnight. Sometimes when we went to my grandparents’ to visit, my grandmother would remember to mix up a batch for us before bedtime. Then she’d make us each a cup of Ovaltine and hustle us off to bed and we’d dream sweet buckwheat dreams in anticipation of the morning.

Sometimes she’d forget, though. We wouldn’t know until morning. We’d wake up and trundle down to the kitchen, and our grandmother would go to fetch the batter from the fridge and suddenly hiss a harsh “Sugar!” Those would be the mornings we’d eat juicy orange halves, scooping out the citrusy pulp with spoons that had serrated tips.

As it happens, I come from a family of legendary pancake makers.

My stepmother used to break out paper pouches of Robin Hood pancake mix and pour flapjacks as big as the pan. We’d challenge her to make the biggest pancakes possible, and time after time, she rose to the occasion. How she flipped those Paul Bunyon-sized flapjacks, I still don’t know. Perhaps being from Maine gave her special Bunyon-like flapjack flipping powers.

On my mom’s side of the family, my mom’s sister, is the reigning queen of ’cakes. As kids, my brother and I spent a lot of time at my aunt’s. We clamored for her pancakes, which were oh-so-fluffy and light and to-die for, and she would always oblige.

My Aunt Barbara—“AB,” as we call her—stood at the griddle with her glasses still on, as though the science of pancake making required the kind of extra attention and intelligence that only glasses can give a person. She was a scientist, after all. Her pancakes, however, represented art of the highest order. They are, hands down, The Best Pancakes Ever.

AB hovered over the griddle with spatula in hand, holding it straight up as though it were a flyswatter ready to slam into action. With a few deft scientist/ninja moves, she’d flip all the pancakes in orderly fashion, and keep right on visiting with us. She’d cook and visit and laugh. She has always had a wonderful, robust laugh. Fewer things make a childhood more memorable than a kitchen full of laughter.

Fewer things make pancakes so delicious, too. I am convinced that laugher was the special ingredient that made her pancakes so good.

That’s certainly why my grandfather’s pancakes tasted so good despite being the worst pancakes ever.

My mom’s father had a recipe he whipped up from scratch and every so often, when he’d stay with us, he’d whip up a batch. My brother and I sat at the kitchen table, eager for another of my grandfather’s pancake adventures.

As he cooked, he regaled us with stories about his service in World War Two. Health issues forced him to serve behind the lines: he could hardly hear out of one ear and could hardly see out of one eye. He insisted they take him even though he couldn’t pass the physical, so they put him to work for the commissary department. We was kind of like a Radar O’Reilly, and he was full of zany exploits.

We heard stories about France, and smuggling candy bars out for his buddies on active duty, and soldiers lighting up with delight when they’d get a letter from their sweetheart back home. Through a crowd, he once saw what he thought was the top of Winston Churchill’s head.

He told one story about a time a bunch of servicemen got in a line to get kisses from pretty French girls—for reasons, today, I can’t remember—and after he and his buddy got their kisses, they ran to the back of the line so they could get another turn.

As he told his stories, he made his pancakes, always in a skillet on the stove rather than on the pancake griddle. He paid them little heed as he cooked them. Inevitably, the pancakes always came out burned on the outside and gooey on the inside—a culinary contradiction that still puzzles me to this day.

But it didn’t matter one whit. He probably could’ve ladled spoonfuls of batter onto my plate and, with enough syrup, I’d have eaten it. On those occasions, it was his stories that were delicious, not the pancakes, which were edible but incidental. I have no fonder memories of childhood than those breakfasts of burned-n-gooey pancakes that the three of us shared.

Today, I carry on the family tradition about once a week. I’m not much of a breakfast eater, but I’ll mix up a batch in the evenings sometime. It makes a perfect little dinner for two: Me and Aunt Jemima. Or, sometimes, me and Mrs. Butterworth. (Ironic that both syrup mavens resemble each other so much.) I call it “bedtime breakfast.”