The twelve days of Christmas, the three wise men, and one book about epiphanies

If you’ve ever wondered what the twelve days of Christmas are—you’re in the middle of them. According to legend, the three wise men saw the Star of Bethlehem on Christmas and it took them twelve days of travel to get to the party. Their arrival, celebrated now on January 6, is known as the Feast of the Epiphany.

But what happened to them during their twelve-day trip?

According to novelist Paul Harrington, the “epic journey” was something like “Indiana Jones meets Lawrence of Arabia at a Lord of the Rings barbecue.”

History itself is largely silent on the story of the Magi, but Harrington—author of Epiphany: The Untold Epic Journey of the Magi—saw a story rife with possibility.

“The Ancient world was dying,” Harrington says. The Roman Empire had risen to the peak of its “bronzed might,” and Israel, conquered, suffered under the empire’s heel. King Herod, paranoid and corrupt, ruled as a despot.

And into the mix, following the Star of Bethlehem, came the Magi.

“Western culture took these bare-boned facts about the Magi and built an entire mythology around them that has just snowballed over time,” Harrington says. “The Bible doesn’t even mention the number of Magi. It just says there were three gifts, so from that we’ve extrapolated that there were three Magi. And were they kings? Were they wise men?”

The story of the Magi first hooked Harrington as a teenager when he heard a recording of T.S. Eliot reading his poem “Journey of the Magi.”

“The poem was haunting, so dark and grim,” Harrington says. “Just the whole idea amazed me—the whole enterprise and the adventure side of it. The whole idea that you could see these beautiful images of magic.”

Harrington has chased the story of the Magi ever since, but it’s largely been a futile chase. Little factual information about them exists. 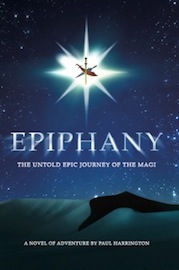 That dearth of information, though, gave Harrington great leeway in creating his own triumvirate of protagonists—an Arabian king, an Ethiopian chieftain, and a Chinese monk.

Specifically, he cast a skeptical eye on the idea that magic isn’t part of the Christian traditional. “The Old Testament is full of supernatural and magical events,” he points out. “It’s just that, in those instances, the source of that power comes from God.”

His novel is not an explicitly religious story. Rather, Harrington says, “I’m interested in the idea that there was this little baby born, and it was a fulcrum point. A big hand on the clock moved, and the whole world changed right there.

“I love the scope if it,” he continues. “It was this small little thing, and it changed the entire globe.”

But Epiphany is not just a story of global change; it’s a story of individual change, too. Aside from the big epiphany that awaits them in Bethlehem, each of Harrington’s three Magi comes to a personal epiphany along the way.

“It’s like asking what is the Epiphany versus what is an epiphany,” Harrington explains.

In that regard, the message of the book might be a little heavy-handed. After all, Harrington says, “You have this story of these men who took up this quest and were rewarded to it by, literally, coming face-to-face with God.”

Face-to-face with God. Yeah, that’s kind of big. Big risk, big payoff. “Sometimes, you have to hang a fastball over the corner of the plate and see what will happen. You have to take that risk,” Harrington says. “People hang back and don’t accept the challenge. You have to be open to the revelations you can have in your own life.”

Skeptics might argue that people never really change, anyway. A leopard and his spots—that sort of thing. Harrington says his book urges readers to reconsider that kind of thinking. “What kind of cataclysm can make a person change?” he asks.

Whether it’s switching careers, going to college, moving across the country—we all embark on our own “epic journeys.”

“There’s something exciting about venturing out into unknown territory,” Harrington says. “People can learn about themselves and the world.”

Harrington has characterized Epiphany as “the greatest story never told.” The book can be read as pure action/adventure escapism, on a more textured level as historical fiction, or even on a more thoughtful level that invites introspection and reflection.