The magic is back 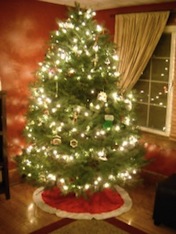 There we were, sitting in Mrs. Farrington’s music class, watching Christmas movies and singing, “Over the river and through the woods, to grandmother’s house we go!” It was a half-day at school, the day before Christmas vacation. And the teachers pooled us all in the biggest room in the school and killed time with these kinds of activities. Everyone was ready for the long and jolly week ahead. I remember my 2nd grade adrenaline pumping through my small veins, so excited to go home early. Not only were thoughts of sugarplums dancing in my head, but I couldn’t wait to go to Grandma’s house and see all of my cousins. Oh, and the presents. In my mind, Santa and I were tight. So I scored big every year. The thoughts of sledding during the day for hours, helping my mom bake the 15 dozen cut-out sugar cookies on Christmas Eve, drinking hot chocolate, and running downstairs on Christmas morning were enough to make me smile for weeks to come.

Christmas as a child really was so magical, and I remember how devastated I was when the reality finally struck: there was no Santa. The mean kids in my class speculated for years, making fun of those of us who may have still believed. But I had younger sisters to protect. I had an image to uphold. I was going to believe!

But one year, my best friend and I decided to save some of the gift tags from our presents, so we could compare Santa’s handwriting. That would be the ultimate proof of whether or not our parents really were posers.

And sure enough, they were. The “To” and “From Santa” were written very, very differently, and mine all included “Claus.” Why wouldn’t he write that on everyone’s tags? I was heartbroken. And Christmas was never, ever the same. Sure, I still felt the holiday spirit. I loved getting out of school and enjoying Christmas vacation-y things. But knowing the big guy would not be the one putting the spread under the tree took a little of the spark away from me. In retrospect, flying sleigh or not, how the hell one person could hit all the houses in the world in one night really is quite ridiculous. But, it was fun to believe.

Then I grew up. High school, college, work. The magic started to come back a little when I had my first place. I was living on my own, making pennies, and found a three-foot fake Christmas tree that would look great in my tiny apartment. It was pre-lit too—even better! My mother had given me some of my old ornaments when I moved out, which helped me accessorize. You know the ones. There was a popsicle-stick Rudolph ornament. The Oscar the Grouch in an old film can ornament. And of course the quintessential handprint-with-a-poem ornament. And I bought a few other small ones, along with some other decor, and made the Yuletide come alive in my place. Vacation was not quite the same that year, after all, because I had a job. So, I was lucky that our office closed early Christmas Eve and I took the day after Christmas off. Far different from the week of sledding, baking, and drinking hot cocoa, but I’d make the best of it. And that’s how it went for six years, until I had my daughter.

This will be her third Christmas, but the first one where she knows who Santa really is. She talks about him. She wants to see him. She loves Christmas cookies and watches the movies with me (which has resulted in a slight obsession with the Grinch!). She has gone sledding a few times with my husband. She loves the tree and helped decorate it—this time, with her handprint ornament. She loves snow globes. She asks for her Christmas pajamas.

The magic is back!

And this year, as we drive to my parent’s house, singing “Over the river and through the woods, to grandmother’s house we go” to my daughter, that same feeling will ignite in my veins.

And maybe, just maybe, I’ll feel like a kid again, too.