It’s a journey that would make Jules Verne jealous.

November is National Novel Writing Month (NaNoWriMo), and I’m going to take the plunge. With any luck—and lots and lots of caffeine—I’ll have a novel come December.

NaNoWriMo started as a lark back in 2000 when a bunch of pals in San Francisco decided to spend a month cranking out novels. “My only explanation for our cheeky ambition is this,” writes NaNo founder Chris Baty in his book No Plot? No Problem! “The old millennium was dying; a better one was on its way. We were in our mid-twenties, and we had no idea what we were doing. But we knew we loved books. And so we set out to write them.”

In the eleven years since, NaNoWriMo—which bills itself as “thirty days and nights of literary abandon”—has become a worldwide phenomenon. In 2009, some 160,000 people around the world set out to replicate Baty’s feat. 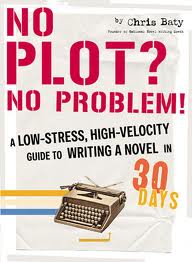 The key is quantity over quality. Don’t stop, don’t look back, don’t revise. Revision is for December. Focus, instead, on pounding out an average of 1,667 words per day. Get a first draft done. People who make the 50K-goal “win.”

Their prize: the manuscript itself “and the exhilarating feeling of setting an ambitious creative goal and nailing it,” says the NaNoWriMo website. No awards. No cash prizes. No publishing contracts (although a number of writers have gone on to publish their books).

“Thanks to the go-go-go structure of the event, the stultifying pressure to write brilliant, eternal prose had been lifted,” NaNoWriMo’s website assures me. “And in its place was the pleasure of learning by doing. Of taking risks, of making messes. Of following ideas just to see where they lead.”

Still, I’m not entirely sure why I’ve chosen to tackle this project. After all, I have plenty of other writing projects in the works. Now pile another 50K words on top? Hmmmm….

But for my friend Jill Smith in Bradford, Pa., a first-timer like me, NaNoWriMo seemed like the perfect excuse to get down to business. Over the past eight years, she’s written three novels. She has two unfinished manuscripts on the shelf, too.

“This will give me incentive to finish one quickly and get my creative juices flowing,” she told me. “I already have my character sketches done and a tentative outline.”

Jill’s prep is well within the rules of NaNoWriMo. You can do as much work in advance as you want—research, character sketches, plot outlines, backstory. Any work on the actual manuscript itself, though, is strictly verboten.

“A framework like this is ideal for me,” said my friend and fellow Scrogue Ann Ivins. She’s had an idea rattling around in her head for a while but hasn’t been able to carve out the time to write. NaNoWriMo, she said, is “the kick in the ass” she needed. “I’ve got to get these people out of my head,” she said.

Jen McConnell, a writer in Cleveland who just recently sold her short story collection to a publisher, is approaching NaNoWriMo from a similar perspective. “OK, I’m in,” she wrote to me a few days after I’d first floated the idea past her. “I’ve been thinking about novel #4 for a few years. This will at least get a rough draft down.”

Jen plans to get up forty minutes early each day and write before she has to send her daughter off to school. I know Jen to be a very disciplined writer—but at her own pace, which can be, by her own admission, “leisurely.”

“Having a deadline like NaNoWrMo intimidates me a bit,” she said, “but that is also the best part. I know that by the end of the month I will have the draft of a novel that, left to my own timeline, wouldn’t be done for another year.”

Squeezing the work into an already busy life is a tough challenge for many NaNoWriMo participants. One friend called it “a puzzle but a priority.”

“There’s always something else to do,” says one of my former students, Lisa Barnard, a social media professional in NYC and two-time NaNoWriMo vet. She did her first NaNoWriMo because she’d always wanted to write something more long-form and creative but could never really get around to doing it. “I thought doing NaNoWriMo was a great idea because it gave me the pressure of a deadline and kind of a reason, an excuse, to actually do what I’d wanted to do,” she said.

Becca Campana, an arts administrator and theater teacher for Arena Stage in Washington, D.C., is “going in for number five this year.”

“One of the main reasons I did it is because I wanted to focus on writing as a craft,” she told me. “I’m good at looking at writing as an art. I’m not so good at parking it at the computer and making it work, so I wanted to develop that. I needed to prove to myself that I can sit down every day and write two thousand words.”

Becca cried when she “won” the first time. “I was overwhelmed. It was a huge relief in such a good way,” she said. “I felt this great sense of accomplishment—and it was at a time when I really needed that feeling. I felt a real sense of satisfaction.”

She also enjoys the camaraderie of NaNoWriMo. “I get to be part of a community I love,” Becca said. She enlists the support of a writing buddy each year and keeps tabs on other writers online. On weekends, she and her friends get together for “write-ins.”

“[H]igh-five for signing up to write a novel during NaNoWriMo,” says a good-humored e-mail from Lindsay at NaNoWriMo World Headquarters, with less than twenty-four hours until launch. “That was a wise choice, my friend. The world needs your novel, and now is the very best time to write it.”

Becca admitted to me that, after five years, “It’s starting to feel like a trick pony, I guess…. If it wasn’t this phenomenon happening all over the place, maybe it wouldn’t be as interesting, but there’s all this great energy around it.” So long as it’s still fun, she said, she’s going to keep doing it.

That sense of community—global community—is part of the allure for my friend Anna Maria Ballester Bohn, who lives in Madrid, Spain. She and a handful of friends plan to gather in a café and, when the clock hits 12:00:01, they’ll begin pounding out words.

“It’s hard to put my finger on it,” she told me. “Maybe it’s the thought that so many people are doing this all over the world. Maybe it’s the excitement of doing something I do and/or think about every day—but doing it in a totally different way. It’s meeting new people in the forums, all of them doing the same crazy thing you are doing, who all can understand the problems you’re struggling with.

Anna told me she has “two fails, one win” under her belt. “I don’t mind though,” she said of the losses. “I always get a tremendous kick out of it, and it helps me refocus my writing. It kind of recharges my writing batteries. After NaNo, I’m always hyped to write more, better, more constantly.”

However, the NaNoWriMo website has one other compelling reason to join in the chaos—a reason that resonated with me strongly. “The other reason we do NaNoWriMo is because the glow from making big, messy art, and watching others make big, messy art, lasts for a long, long time,” the site says. “The act of sustained creation does bizarre, wonderful things to you. It changes the way you read. And changes, a little bit, your sense of self. We like that.”

Every NaNoWriMo vet I’ve spoken to has offered plenty of advice for forging ahead. NaNoWriMo’s website offers plenty of tips, too. But a key message that pops up again and again, as best articulated by my regional liaison, JessAnn: “Tell EVERYONE about your novel!”

“This will pay big dividends…” says one of the e-mails NaNoWriMo has sent to me, “when the only thing keeping you from quitting is the fear of looking pathetic in front of all the people who’ve had to hear about your novel for the past month.” The looming specter of personal humiliation, the e-mail says, is a very reliable muse.

So here I am, putting you—and therefore, putting myself—on notice: November is National Novel Writing Month, and I am writing a novel. I will begin at 12:00:01, and over the subsequent days, I will crank out at least 50,000 words.

And to add to my punishment, I’ll provide weekly updates here at S&R—so not only do I have to write 50K words, but then I have to write about writing those words. Tune in each Thursday for our WordsDay feature, and together, we’ll see where this journey takes us.