The Cult: One of rock's enduring bands in a time of transition

“We’re in the middle of a sort of transition right now,” Ian Astbury told the crowd that had packed Buffalo’s Town Ballroom Friday night.

Two thousand-plus fans had come to see The Cult blast through a seventeen-song set that included old favorites like “Fire Woman” and “She Sells Sanctuary” and new tunes like “Every Man and Woman Is a Star” and “Embers.”

And while you might expect one of rock’s most enduring band’s to of course know how to rock, damn it all if these guys aren’t still playing for keeps.

Billy Duffy can still shred a guitar as well any living rock legend—although he looks so surprisingly clean-cut these days. Since when are guitar gods so clean cut? But just listen to Duff blister out a solo…. Damn.

Drummer John Tempesta and bassist Chris Wyse weave rhythms as tight as any musicians I’ve ever heard. Toss in rhythm guitarist Mike Dimkich, who’s just plain fun to watch, and The Cult is as “rock and roll” as rock and roll gets.

And then, of course, there’s Astbury, who melds psychedelia, mysticism, and spiritualism with an almost-arrogant in-your-face rock-and-roll attitude. On stage, he’s a presence, the embodiment of a stereotypical rock star: charismatic and colorful, larger than life, slightly dangerous, powerful.

Sporting dark glasses and a thick Jim “Morrison Hotel” beard, and even a bit of a potbelly, Astbury looked like he’d gone to seed a little, like he was in the midst of an in-the-wilderness phase. But he easily seemed more relaxed, yet more sure of himself, than I’ve ever seen.

Gone was his almost-arrogance. Gone were the belligerent strings of expletives he’s unleashed on past audiences. I remember a time at Cleveland’s House of Blues in 2007 where he unloaded a cluster of F-bombs on audience members in the balcony for sitting down. “It’s a fucking rock and roll show!” he fumed from the stage. “Fucking stand up!” In New York City that same year, he snapped at someone in the audience: “You don’t have to tell me where I am, bitch. I know exactly where I fucking am.” He didn’t let it go, either. “Bring it if you got it, New York City,” he said. “If you think you got it.” 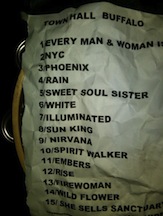 In Buffalo, he seemed to be in a really, really good mood. He was in the Town Ballroom to make music and have a good time. He asked the audience if they were enjoying themselves and sounded as if it really mattered to him. “This still feels fresh to us,” he told fans.

Beyond Astbury’s apparent personal transition, The Cult is in the midst of a business transition, too. The band has veered away from traditional marketing techniques and has, instead, encapsulated itself—quite literally. “Rather than revisit the traditional method of releasing a long-form CD, the ‘capsule’ is a collection of not just new music, but film, art and fashion,” The Cult’s website explains. Fans can download material from the site or order it on CD, DVD, and even specially designed USB drives.

“We are stepping away from the conventional system,” Astbury says on the site. “[W]e are giving the audience the opportunity to own other creative visions. The Capsule is a way of delivering music in bites, quicker and fresher than in the context of an album format.”

Their first go at all-digital came when they released the single “Every Man and Woman is a Star” as an iTunes exclusive back in August. The similar release of “Embers” comes in November.

The song-by-song approach harkens back to the pre-album days of rock and roll, and for The Cult, the past as present has to be a good thing. “We live on the road,” Astbury told the crowd in Buffalo. Their U.S. tour goes through the end of November, then they’re off for a tour of England starting in early January. In May, Astbury said, they’ll sweep across Canada for a tour they’ve just finished organizing.

With a schedule like that, it doesn’t seem like The Cult would even have time to get into the studio to record an album.

“The band is on fire right now,” says Astbury.

That was certainly the case in Buffalo.

Tagged as: ian astbury, rock and roll, The Cult