It's the witchcraft, stupid! 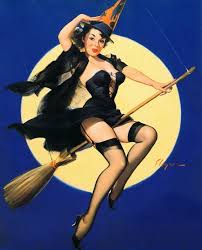 The revelation that Delaware Republican Senatorial candidate Christine O’Donnell admitted to dabbling in witchcraft should not come as a surprise. In fact, it explains everything. The only real question is what constitutes “dabbling.”

Many of us have been hard pressed to find a rational explanation for the rise in popularity of the tea party movement. At first it seemed to be something of a blue collar class thing, but that turned out to be untrue—tea partiers are better educated and better off financially than the average American. Then we moved on to the racism meme, and that explains a lot, certainly—the immigrant bashing, the Obama cartoons. But that in itself didn’t explain the number of otherwise reasonable people who are perfectly prepared to throw the fruits of progressive government of the past seventy years into the trashcan. Of course, white privilege is rebelling against the prospect of modestly higher taxes for the rich, but that doesn’t alone explain the outright glee with which the tea party wants to worsen poverty in America, or take away the recent expansion in healthcare coverage.

None of this makes rational sense. Tea party candidates around the country can’t wait to shut the government down. None of the Republican senatorial candidates (now that Mike Castle has lost to Christine O’Donnell in Delaware) believes in Global Warming. We’re seeing the largest organized bout of irrationality in the United States in decades, perhaps even longer.

But now that we know that at least one of the tea partiers messed around with witchcraft, it all makes sense. Who knows what demons have been released through “dabbling.” I mean, no one really understands this stuff anymore, right? How do we know this O’Donnell person is who she says she is, after all? She told us about a date with some guy that seemed to involve a satanic alter, but other details are surprisingly sparse for such a blabbermouth, who, unsurprisingly, since she’s a Republican, also turns out to be a crook. She says she’s moved on, but how do we know this is true? Because she continues to spout nonsense? You know, I bet that if we dropped her in water, she’d float. Isn’t that how they did it in medieval England? Isn’t there some test or something we could devise to find out whether she really isn’t a witch? I mean, it’s just her word that she isn’t, and we’ve already seen what that’s worth.

In fact, the surest sign that O’Donnell is a witch is that in spite of everything, she still might end up a US Senator. Along with a whole bunch of other equally well-qualified people. There was a time when this sort of thing would have been seen as a sure sign that the apocalypse was nigh.