Sunrise as east as east gets 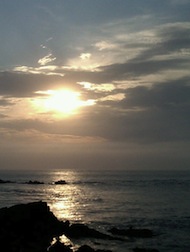 The first trace of dawn appears as a soft blue glow just before 3:25, catching me quite by surprise. The “official” time for sunrise isn’t supposed to come until 4:45, and although I knew the sky would begin to lighten before then, I didn’t realize it would start to glow quite so soon.

I’ve come to Quoddy Head State Park, just south of Lubec, Maine, to watch the day break. Quoddy Head, with its tall cliffs and rugged rocky coastline, is the easternmost point in the United States. The new day will greet me here sooner than it will greet anyone else in America.

A splash of color appears just above the horizon, orange that’s really pink that’s really orange that’s really pink. As the sky continues its shift to light blue, the wilder colors settle into a soft, soft pastel line brushed just above the faint outline of Grand Manan Island, which begins to materialize out of the dark indigo sea. Six miles offshore, Grand Manan belongs to New Brunswick. I’m so close to the international border that the GPS unit in my Blackberry keeps toggling back and forth between the Eastern and Atlantic time zones, depending on where along Quoddy Head’s cliffside trails I walk. 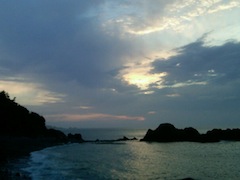 The irony isn’t lost on me that it’s the Fourth of July, the 234th birthday of our country, and I’m facing Canada. I have all of America to my back.

But really, I’m on the forefront. I’m on the edge. I’m on the frontier. That’s where America has always been its most innovative, its most courageous. It’s invigorating to be here.

The light breeze from the Bay of Fundy brings with it the smell of sea salt, which mingles with the rich smell of spruce from the forest that grows down to the edge of the cliffs. The unrelenting coastal climate has stunted the trees, and lichen encrusts their trunks and branches. The trees look gnarly and proud and ancient, and they are alive with the friendly chatter of birdsong.

As the sky gets brighter, I can make out bright orange lobster buoys floating just offshore. I see others, lime-green and white, bobbing nearby. A family of ducks—one male and a brood of thirteen females—paddles around. Two of the females have clusters of ducklings in tow.

Farther out, a channel marker blinks greenish-blue. I see something that’s probably a small minke whale swim by, cutting silent arcs through the waves. 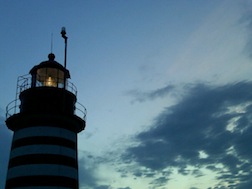 The great moan of a man-sized foghorn rumbles out from beside a brick building next to the lighthouse keeper’s home. It moans, passes two seconds, then moans again—a cycle it repeats every thirty seconds. The lighthouse, meanwhile, keeps a rhythm of its own. It stands like stocky barbershop pole, fifteen red and white stripes spinning nearly fifty feet high, with the light on top that flashes, pauses, then flashes again every fifteen seconds.

A woman and three young teenagers show up. One of the girls is celebrating a birthday. They’ve come from Machias, forty minutes away, to start the day’s festivities by watching the sunrise. They stay for maybe ten minutes, long enough to see the sun illuminate a cloudbank that obscures its actual appearance. “There you go,” the brother says—and then they go. 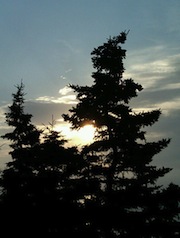 I stay and explore now that daylight has arrived. I’m alone, but the sea and the dawn are all the company I need.

By six a.m., a light fog settles in over the headlands. The newly arrived sun makes the air translucent. It’s time, anyway, for me to head back.

The day has just begun, and already I feel full.