Jefferson: Self-governance and "the field of knowledge" 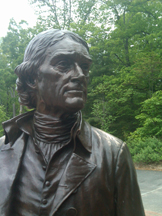 Final part in a series

“The field of knowledge,” said Thomas Jefferson, “is the common prosperity of all mankind.”

Jefferson’s words are inscribed in big bold letters in the entryway of Monticello’s visitor center. They’re written in architectural perpetuity in Jefferson’s “academical village,” the University of Virginia. They’re enshrined in the very concept of democracy.

“Whenever the people are well-informed, they can be trusted with their own government,” Jefferson said. Knowledge enables self-determination.

It’s one of our most fundamental beliefs here at S&R: A properly functioning democracy depends on a well-informed electorate.

In our most cynical moments, that thought makes some of us cry. It can be depressing to think how uninformed today’s electorate is, how it would much rather be entertained than informed, how easily distracted it is, how it values volume over content.

But we keep chugging along with our posts because somewhere, deep down, we’re all idealists, too, and it’s our belief that our blog adds something to the larger conversation. In our way, S&R is an “academical village” in fine Jeffersonian tradition. 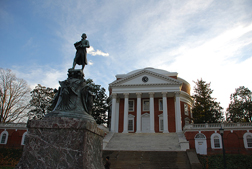 “[T]his institution will be based on the illimitable freedom of the human mind,” Jefferson wrote in an 1820 letter to a friend as he was explaining his vision for what would become UVA. “For here we are not afraid to follow the truth wherever it may lead, nor to tolerate any error as long as reason is left free to combat it.”

Historian David McCullough called Jefferson “a university unto himself”—not a far stretch if you look at his library, which reflected Jefferson’s wildly far-ranging interests. He used himself, then, as the intellectual template for cultivating similar hungry minds when he built the university.

He threw himself into the project with gusto, and it clearly stands as his greatest post-presidential achievement. He began thinking about the idea as early as 1800, although he didn’t tackle the project with gusto until he retired to Monticello. Construction began in 1817, and the school was chartered in 1819. 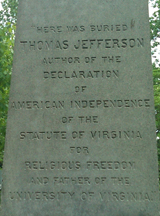 Jefferson himself considered the school one of his three greatest accomplishments, worthy enough to be inscribed on his grave marker: “Author of the Declaration of American Independence, of the Statue of Virginia for Religious Freedom, and Father of the University of Virginia.” (Interestingly, he omitted his service as president of the United States, which he referred to as a “splendid misery.”)

But even as early as 1779, as part of legal reforms in Virginia, Jefferson drafted a “Bill for the More General Diffusion of Knowledge.” The law was intended to provide public education for the purpose of protecting and promoting democracy.

Universal education was a radical idea—but the Founders all sensed its importance. John Adams, for instance, worked the idea into his first draft of Massachusetts’s constitution in 1778: “Wisdom and knowledge, as well as virtue, diffused generally among the body of the people, being necessary for the preservation of their rights and liberties.” Adams worried that the passage would be stricken out because it was so bold, but lawmakers adopted it unanimously.

Virginia lawmakers did not adopt Jefferson’s 1779 proposal (although they did adopt the idea alter), but Jefferson never gave up on the idea. “As men become better informed, their rulers must respect them more,” he wrote in an 1802 letter to Thomas Cooper.

Education ennobled people, Jefferson believed. “Education engrafts a new man on the native stock and turns what in his nature was vicious and perverse into qualities of virtue and social worth,” he said. Education led to enlightenment.

That’s perhaps the best way to characterize Jefferson: a child of The Enlightenment. I say “child” because he always retained his childlike sense of wonder in the world, which allowed him to delight in new discoveries. The entry hall at Monticello is adorned with wall-sized maps of the Louisiana Purchase, Africa, and South America. His house is filled with state-of-the-art gadgets like a letter-copying polygraph, a swiveling bookstand that accommodated five open books, a dumb waiter from his wine cellar to his dining room, a pasta maker, and an ice cream maker.

“I like the dreams of the future better than the histories of the past,” he once said.

That forward vision came from intellectual stimulation and engagement—the very sorts of things that also made self-governance possible. In other words, self-improvement and self-governance went hand-in-hand.

“What would be the value of a democratic republic, [Jefferson] asked, if it existed in an intellectual stupor caused by inattention?” says Jefferson biographer Andrew Burstein in his book Twilight at Monticello.

In some way or another, we pose that question to ourselves—and our readers—every day at S&R. And if Jefferson’s work, and the work of his contemporaries, is to endure, if it is to mean anything at all, then it remains THE question we must continue to pose.

The stakes are high: “the common prosperity of all mankind.”

The answer means everything.