China at the World Expo: Larger than larger-than-life

Part three in a series from China

China is larger than life.

It boasts the world’s largest population. It has the world’s fastest growing economy. It embodies the most dramatic social contrasts.

But on the day we visit the Chinese pavilion at the World Expo, China becomes larger than larger-than-life.

The pavilion itself is China writ large. It represents everything China wishes to be—and, in most cases, is: big, powerful, commanding, visionary. Called “The Oriental Crown,” the building at once evokes China’s ancient history while embodying its cutting-edge modernity. The theme, say pavilion designers, is “Chinese wisdom in urban development.”

Four massive columns support a big, red inverted pyramid made to resemble dougong—interlocking wooden brackets stacked in layers overtop crossbeams that run between the tops of the four columns. The designers describe dougong as “one of the most important elements in traditional Chinese architecture.”

Standing more than 200 feet tall, set atop a manmade knoll, the pavilion commands attention and awe, dominating everything around it. The pavilions for Hong Kong and Macao, for instance, sit at its feet like subservient dwarves, and Taiwan’s pavilion sits off to the rear, separated by an elevated walkway, an island unto itself.

The magnitude of China’s pavilion also represents some of the behind-the-scenes wrangling that took place leading up to the Expo. China can boast that more countries have exhibitions at the Expo than at any previous exhibition—but that’s in part because China reportedly used its considerable economic weight to “suggest” to other countries that it would be wise to set up exhibitions…or else.

The China pavilion is one of five permanent structures that will remain open after the Expo closes in October. The Expo center, the theme pavilion, and the giant flying saucer-like Expo culture center will also continue to play roles in Shanghai’s explosive growth. The “architectural heart” of the Expo, the Expo Axis, will also remain open, with three layers of shopping. The Axis features six giant sculptures that look like egg whisks somehow reformed into whirlwinds.

But it’s the China pavilion, with its distinctive architecture and commanding presence, that makes the biggest impression, that has the greatest symbolic power.

Because it represents all that China wishes to be—and, of course, because China enjoys the home field advantage—the China pavilion draws the largest crowds at the Expo. Ninety-five percent of the Expo’s visitors come from China, so, unsurprisingly, waits as long as four or five hours to get into the China pavilion are not uncommon. The Chinese are eager to share their home-country pride while being simultaneously inspired.

Our host, Prof. Enlin Wang of the Beijing Institute of Technology, has pulled off something just short of a miracle: He’s arranged for special front-of-the-line tickets for our group to tour the pavilion. We zip to the front and in we go, up a long escalator to a wide plaza beneath the pavilion, then across to a bank of elevators set in the foot of one of the pavilion’s massive columns.

The elevator disgorges us into a dark room will illuminated glass-paneled walls, each etched with facts that highlight China’s growth and modernization. An inverted cityscape hangs from the ceiling.

The crowd swells, waiting to get into a set of doors that eventually opens into a movie theater that makes an IMAX look small. People run, push, shove (little old ladies, surprisingly, are the worst offenders), all vying for one of the thousand seats. An overflow of people still ends up standing.

I’m not sure what to take away from the movie, to be honest. It loosely tells a narrative about a young man and a young woman who seem to be falling in love, but they’re also busy helping on various work projects that they seem to love as much as they love each other. It’s all about progress and the good of the collective and China’s rush toward urbanization, I guess. There’s a young boy who keeps making appearances, as does as a rough-hewn-but kindly old man who looks like a shepherd from the northern mountains.

The story is mostly told without words, although there’s a promise at the end that China will embrace “the green technology” to make its future cities even happier, healthier, and more sustainable. Better cities, better lives, indeed.

We’re disgorged from the theater—where, again, people run and push and shove—into the first of a series of exhibition halls. The word “Reminiscence” is spelled out in illuminated glass rods that look like they’re shooting down from the ceiling. The thick glass floor reveals a simulated archeological dig beneath it. 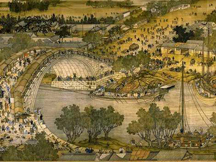 Beyond that is a wall the length of a football field with an animated version of Zhang Zeduan’s famous thousand-year-old scroll painting Along the River During the Qingming Festival. The original painting has more than five hundred people in it, and this amazing animation brings them all to life in painstaking slow-motion detail. It’s the kind of thing I could watch for hours—if I didn’t have thirty-thousand people surging forward all around me, pushing, shoving, rushing for the next cool thing.

The pavilion’s exhibits provide one visual feast after another.

A section call The Land of Hope features trees with animated strips of green text running up their trunks. Plants hang in glass tubes from the ceiling. Everything’s bathed in a neon green light. Another section features a bamboo forest made of white ropes lights that hang from the ceiling.

A walkway down to the next floor serves as a gallery for children’s artwork. The artists range from first grade through middle school, but the pieces are all of such amazing quality that I wonder how many future Rembrandts, Picassos, and Zhang Zeuans I’m looking at.

The walkway leads to a section called “The Dialogue,” with more animated strips of text—these ones cris-crossing over the walkway like suspended strands of police tape—flashing things like “Poetics: the dialogue of urban landscaping.”

We get on a monoraily thing reminiscent of Disney’s “It’s a Small World” ride and float through a series of dreamy landscapes that look like strange, white-and-fluffy versions of heaven with white cotton candyish clouds and white dougong pavilions. It all has the flavor of one of those Christmas displays with the white artificial pine trees and lots of white cotton to represent snow and sparkles. Another landscape looks like Candyland gone wrong, and another has a forest of trees that could’ve come straight out of Dr. Seuss.

The section tries to depict the dialogue between the past and present in China’s continuing push toward modernization. From what I’ve seen, that dialogue has sometimes been a shouting match, but in other places, it’s been a robust, constructive discussion that’s led to amazing progress.

A final exhibit hall shows China’s most cutting edge technology, like a completely electric “plug-in” car. A display extols the virtues of recycling straw while another warns of the evils of using plastic shopping bags. On the walls, designers have placed slogans like “Measured Consumption,” “Proper Exploration,” “Greening Campaign” and “Return to Simplicity.” That last one’s a bit ironic considering the magnitude of the pavilion. 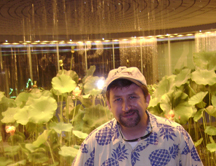 A glass wall with a waterfall running down the inside of it separates me from a greenhouse full of beautiful tropical plants. I go through a door into the room only to discover that I’m not in the room at all—I’m outside, riding an escalator out of the belly of the pavilion back toward the plaza below. I’ve been tricked!

I stand in the plaza, blinking, even though the overcast sky shields me from any sun. The spectacle of what I’ve just seen is still trying to sink it. China sure did it up big for its pavilion and, as I’ll discover over the course of the day, for the entire Expo. China is larger than life and wants everyone to know it. If the Beijing Olympics in 2008 served as the country’s coming-out party, the Expo is China’s way of saying, “Hey, we can keep this up all day if we need to. Just watch.”

Believe me, I’m watching. The rest of the world had better be watching, too.